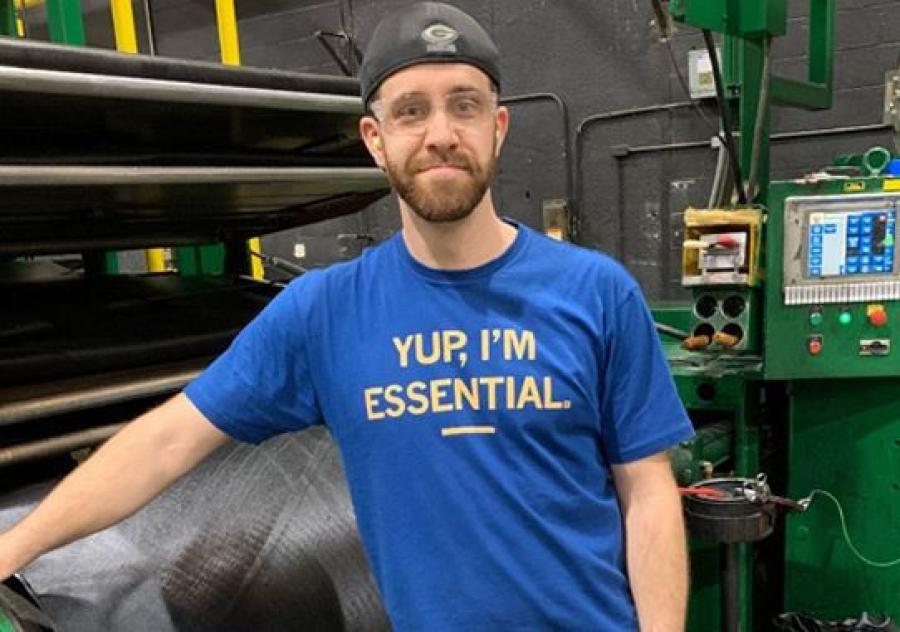 A Titan International worker wears a shirt that was designed due to an employee-driven idea to unite the company's workforce during the COVID-19 pandemic.

It was right around the time of the Chinese New Year that Paul Reitz knew he had a serious problem on his hands.

Titan International's China-based employees had just taken three weeks off to participate in New Year festivities, and word began to surface that a potentially dangerous virus was making its way through parts of the country. Reitz, the company's president and CEO, was concerned.

"The crisis really started to develop during the New Year celebration," said Reitz. "Everyone takes three weeks off of work. But then they didn't come back. So, you're gone for three weeks and don't turn the plants back on? Well, we started to realize something big was going on."

The COVID-19 virus was spreading rapidly throughout China. Reitz and his team at Titan International, an AEM member company and global manufacturer of mounted tires and wheel systems for off-highway equipment, recognized the situation required a quick and decisive response. However, what they did not know, at least initially, was the immense impact the pandemic would eventually have on the company's operations around the world.

"We all know this now, but back in January, we all thought it was an isolated Chinese event," said Reitz. "But from the third or fourth week of January into February, everything that took place let us know that wasn't the case."

The virus eventually emerged in other places where Titan International facilities are located – most notably Italy and Spain. Company officials were quick to respond. Initial efforts zeroed in on determining if, and when, operations in China could start up again.

Reitz and his fellow leaders found themselves wrestling with two particular questions in the earliest days of the COVID-19 pandemic: What did bringing operations back online actually mean? And, perhaps more importantly, what would be the drivers behind doing so?

It wasn't long, however, before a third question emerged. It centered on what would happen once the COVID-19 became widespread in the United States. According to Reitz, company officials wanted to know how the U.S. government would respond to the crisis, and how Titan International's operating conditions would ultimately be defined.

"We knew how the Chinese government, the Spanish government and Europeans were approaching it, and it was really a mixed bag," he continued. "In some cases, we were operating. In other, cases, we had to pull back operations."

However, once the U.S. government deemed Titan International an "essential business," Reitz and his team were determined to move forward with a coordinated and collaborative pandemic response effort.

"We said ‘Okay, we need to figure out how we learn from our experiences overseas, how we can translate that here, and how we can develop safe operating conditions'," said Reitz. "But we also realized that wouldn't be enough. We're required to operate by our customers. That was the reality, but we needed to make people feel comfortable. You can't just put a plan in writing. You need to make people feel it."

Titan International started by establishing a COVID-19 response team to increase awareness of the virus, enhance communication throughout the organization, and ensure the safety of company employees across the country and around the world. Comprised of company representatives with a wide range of skills and expertise, the response team serves as a centralized and accessible source for timely and relevant information for Titan International employees and customers alike.

"Every day we discuss, and every day we assess," said Mary Damitio, the company's director of compliance, and a member of the Titan International COVID-19 response team. "And it's really been key to opening up communication between all of our facilities and, frankly, our employees, too."

The primary tasks of the response team include monitoring Centers for Disease Control and Prevention (CDC) guidance and executive updates, as well as guiding efforts at ensuring employee safety.

In the days and weeks since the COVID-19 pandemic emerged as a threat to its operations, Titan International has implemented a number of measures to curb the spread of the virus and protect its workforce. Social distancing and telecommuting policies have been implemented. Hand sanitization stations have been installed. Personal protective equipment (PPE) has been distributed. Mass employee gatherings have been prohibited. In addition, the company has set up a hotline phone number to further facilitate communication between company leaders and employees.

And, as each protective measure is introduced, company officials communicate a consistent – and critically important – message to its workforce.

"We let everyone know the guidelines are in place, but the situation is constantly evolving – and that the guidelines may be enhanced as we learn more about the virus," said Damitio.

Collaboration and teamwork are easily accomplished when times are good. When crises arise, however, the organizational challenges they bring can drive people apart and doom organizations to failure. Titan International officials are keenly aware of that fact. And it's why the company has leaned on the collective intelligence of its employees, its management team and its customers to help weather the ongoing COVID-19 pandemic.

"And I think it's working, because we've earned their trust," said Reitz.

However, according to the Titan International CEO, the last several weeks have not been without their fair share of challenges and nerve-wracking moments. He cited a recent discussion with the company's union leaders regarding operations at three unionized plants in the United States as a notable example. A lot was stake, and consensus needed to be reached on how to proceed accordingly.

"They had to trust we were going to provide a safe work environment," said Reitz. "We had to trust they were going to show up for work. If the union says, 'We're not coming in,' well, then we have a very serious situation on our hands. But we've been fortunate, as both sides have handled everything really well."

Ultimately, the discussion served as a helpful reminder of the importance of communication and transparency in navigating the current COVID-19 health crisis.

"And that transparency continues on into customer communications," said Kim Boccardi, vice president of marketing of Titan International. "We're always answering questions, making sure our dealers and customers know we are open. We're also communicating with them when production changes, and those lines of communication are always open."

While it's difficult to project what exactly the future holds for Titan International, its customers and its employees across the country around the world, Reitz said he and his fellow company leaders have reason to be optimistic.

"We're hearing some good things, not just about employees at businesses adapting, but now starting to make some changes within society and releasing some of the restrictions that have been in place. But what it comes down to is people's willingness to adapt and make different decisions, at work and at home," he said, referring to the company's overseas operations.

"Then, when it's time for something similar to happen here in the U.S., we'll be able to adapt and make the right decisions."

To learn more about AEM's efforts to support the equipment manufacturing industry, visit the COVID-19 section on the AEM website.