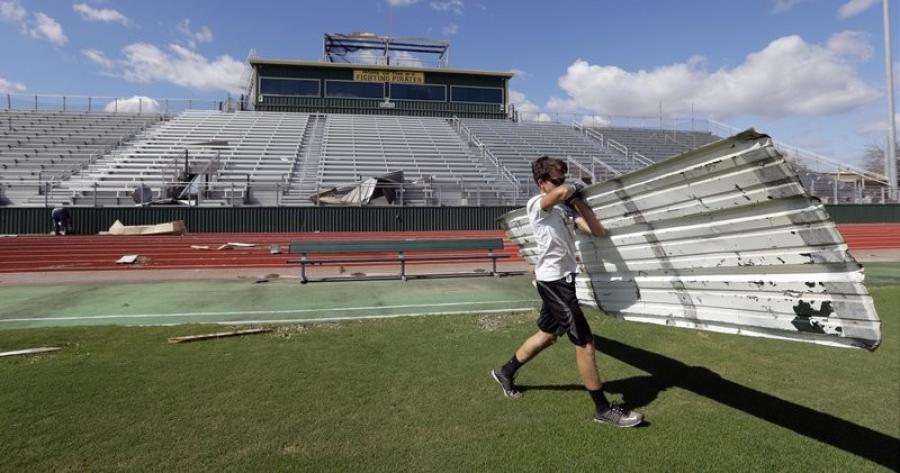 The roof of Rockport-Fulton High School partially caved in and Pirate Stadium was wrecked. The lights of the 4,300-seat stadium were knocked down and two-thirds of the scoreboard was blown out. Harvey even took both goalposts with him.

When tropical storm Harvey made landfall near Rockport, Texas in late August, it brought devastating winds whipping as fast as 130 miles per hour along with it across Aransas Bay. According to estimates from national weather experts, the Category 4 hurricane dumped 40 to 52 in. of rain on southeast Texas, causing a catastrophic flood disaster the likes of which that region has never before seen. Countless homes and other valuable pieces of property were severely damaged by the storm and its subsequent flood, which claimed the lives of at least 82 known victims, the Texas Department of State Health Services announced earlier this month.

With the waters having receded and the impacted communities now in recovery, an assessment of the damage can be made by the proper authorities. Approximately 200 million cubic yards of debris – enough to fill Texas A&M University's 102,000-seat Kyle Field 125 times – is strewn about the Gulf Coast and Harris County, which includes the city of Houston and its 2.3 million residents. Earlier this month Congress passed President Donald Trump's $7.9 million emergency funding request. Houston and Harris County each received $91 million and $44 million, according to The Wall Street Journal. Texas Governor Gregg Abbott has said his state will need upward of $125 million in total federal relief funding.

Among the rubble left in Harvey's wake are fragments of vital infrastructure, like municipal buildings and schools. For example, in the Houston Independent School District – the largest public school system in Texas and seventh largest in the country – there were 200 district-owned buildings that were inspected and deemed to have sustained damage from the storm. Estimated repairs are likely to cost approximately $700 million. According to Mike Morath, commissioner of the Texas Education Agency, 52 of the 964 school campuses devastated by Harvey's wrath suffered damage considered "catastrophic."

The draw in most of these tight-knit Texan communities is, of course, high school football. The storied Friday Night Lights have been dim as of late, with teams either cancelling games or suspending seasons altogether while crucial repairs are made. In Aransas Pass, the Panthers' 3,500-seat stadium (tiny by "everything's bigger in Texas" standards) had its press boxes blown off and grass ripped up, but Head Coach Ryan Knostman remained optimistic that his team will play this year – and when they did, he told The Washington Post he had tears in his eyes.

"For a split second, it was like everything was back to normal, where nothing bad had happened," Knostman said.

Back in Rockport, that community's high school football team lost everything. The roof of Rockport-Fulton High School partially caved in and Pirate Stadium was wrecked. The lights of the 4,300-seat stadium were knocked down and two-thirds of the scoreboard was blown out. Harvey even took both goalposts with him. Unable to play at its home field for the season opener, Head Coach Jay Seibert arranged for his team to play on the road 40 minutes from Rockport in Sinton on Sept. 15. He told his players to remember to play for each other, as well as all friends and family in the community before hitting the field.

"People say athletics is not important and right now it's not in the big picture, but it's very important for our kids to get back to normalcy, to what's normal to them," Seibert told the Corpus Christi Caller-Times. With a large portion of the state's multi-million dollar football stadiums intact and some (like Houston's NRG Stadium) even serving as temporary shelter, it's a little friendly competition that will help take residents' minds off the destruction and back to life before Harvey.