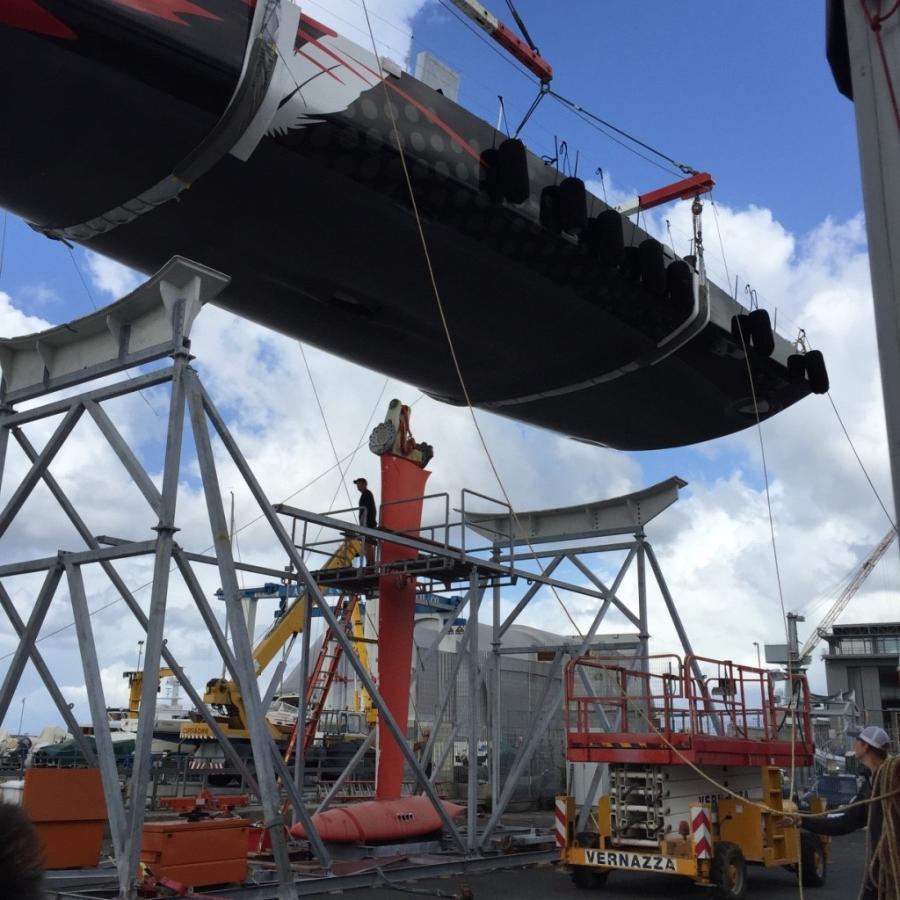 HYTORC was asked to devise a plan for fastening the Comanche's keel to the interior of its hull, where it then attaches to a hydraulic cylinder, which swings the entire keel to either port or starboard – whichever is windward – to counteract the heeling force of the sails.

Welcome aboard the Comanche, a 100-ft. super maxi yacht commissioned in 2014 by Netscape founder James H. Clark with one goal in mind: To break open ocean racing records. It's been doing exactly that ever since, and in July 2017 Comanche set a new transatlantic passage record, sailing from Los Angeles to Honolulu in just 5 days, 14 hours, 21 minutes and 25 seconds during the 49th running of the Transpacific Yacht Race, popularly known as the Transpac.

Above the water, the Comanche's wide hull design and its capability to unfurl a diverse array of headsails and spinnakers give the vessel its unique appearance. But, it is what's below the water that keeps this vessel upright and on record-setting course. Its 20-plus-ft., 30,000-lb., removable canting keel presented Comanche's build team at Maine's Hogdon Yachts with unique design and installation challenges. They called on HYTORC for help.

HYTORC was asked to devise a plan for fastening the Comanche's keel to the interior of its hull, where it then attaches to a hydraulic cylinder, which swings the entire keel to either port or starboard – whichever is windward – to counteract the heeling force of the sails. All fasteners needed to precisely and securely couple metal to carbon fiber, and also needed to be resistant to the corrosive effects of the harsh nautical environment. And, to add to the challenge, the keel also had to be relatively easy to remove for overland transport and reattach at the next port.

“The first thing we noticed was that the bolt pattern on the plates used to couple the keel to the hull wasn't a typical flange,” said Chris Bolduc, territory manager for HYTORC in New England. “The fasteners were almost right on top of one another, so there wasn't a good reaction area to put a standard tool into the bolt circle. On top of that, the carbon fiber hull was not a typical bolting environment.”

Tackling one detail at a time, the team decided that the HYTORC Avanti 3 would be the right hydraulic tool to use. With a torque range of up to 3,000-plus-ft.-lbs., and paired with the powerful HY-115 Electric Pump, the bolting solution would make easy work of a job that would have challenged any torque tool with a traditional reaction arm. The overall bolt load on the Comanche project was 77,000 pounds, and the actual fastening had to take place with the yacht suspended in rigging and lowered onto the keel assembly.

The hull's carbon fiber material, and atypical bolt pattern, was the next issue, as it introduced a level of susceptibility to compressive fatigue, shearing fatigue and extremely tight reactive areas. Because the fiberglass-like material doesn't behave in the same way as a metal flange, concerns arose that the force of a fastener might compromise the closure of the keel if there wasn't enough area to carry the load. To fasten the keel to the hull safely, HYTORC applied its GT series nut.

“We used the GT series because it had more surface area at its integration point with the carbon fiber material,” said Bolduc. “At first, the Comanche team requested Inconel® or beryllium copper fasteners. Our high-grade stainless GTs provided comparable performance to the superalloy, and at a fraction of the cost, so the build team was more than happy to take our advice and go with the GTs.”

HYTORC's stainless steel GT nut allowed Comanche's builders to achieve side-load free, precision tension with significantly reduced risk of sheer force or other stress damage to the carbon fiber hull. The stainless steel material also guaranteed the fastener would never gall, even under prolonged exposure to the salt water, which in turn made them easy for the crew to use time and again.

“This project took us from the industrial settings we're most accustomed to and put us in the arena of high-performance sports, and it's been an absolutely exciting endeavor,” said HYTORC president Eric Junkers. “We are proud to work with the Comanche team on its ongoing quest for world records.”