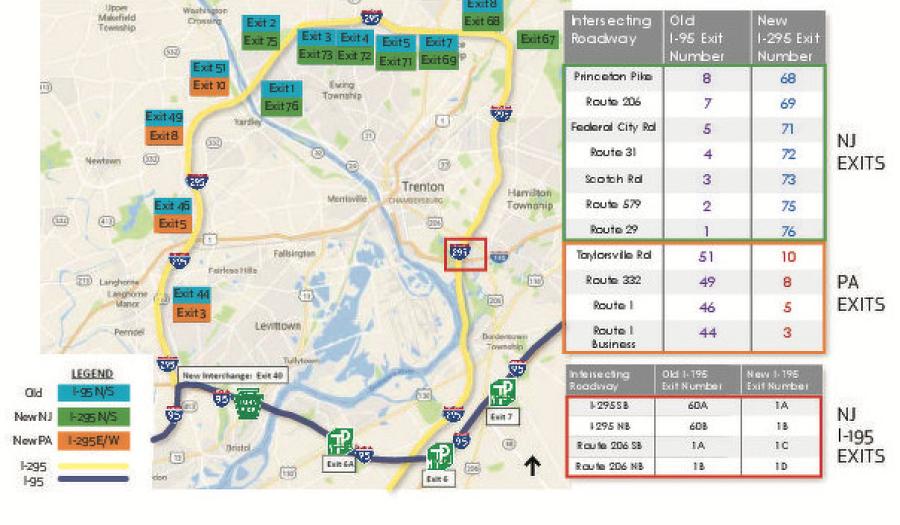 New Jersey Department of Transportation (NJDOT) officials have announced the section of what is now I-95 in New Jersey from the Scudder Falls Bridge over the Delaware River to the Route 1 Interchange in Mercer County will be redesignated as I-295 in early 2018.

Currently, I-95 runs from Philadelphia north across the Delaware River at the Scudders Fall Bridge into New Jersey and ends at the Route 1 Interchange, where the roadway becomes I-295. This creates a gap in I-95, which picks up again as part of the New Jersey Turnpike at Interchange 7A in Robbinsville, N.J.

The section of what is now I-95 in New Jersey will become I-295 by extending the existing I-295 from the Route 1 Interchange to the Delaware River. Concurrently, the I-95 section in Pennsylvania, from the Delaware River south to the new interchange will be redesignated as I-295.

The redesignation program to replace signs will consist of three phases. Phase 1 consists of replacing signs in New Jersey and is scheduled between January 2018 and March 2018 starting with existing I-95 Interchange 8/Princeton Pike and moving west toward the Delaware River. NJDOT will provide more information on the new highway designation and exit numbers as the project progresses, including the use of Portable Variable Message Signs during sign installation to inform motorists of the redesignation and exit renumbering process.

NJDOT is working with the New Jersey Turnpike Authority, Pennsylvania Turnpike Authority, PENNDOT, and the Delaware River Joint Toll Bridge Commission on this project. Public outreach is on-going and additional information can be found on http://www.state.nj.us/transportation/commuter/roads/I95-295/.