Iconic Coaster to Be Razed for Development

One of South Florida’s largest mixed-use projects is experiencing its share of twists and turns. 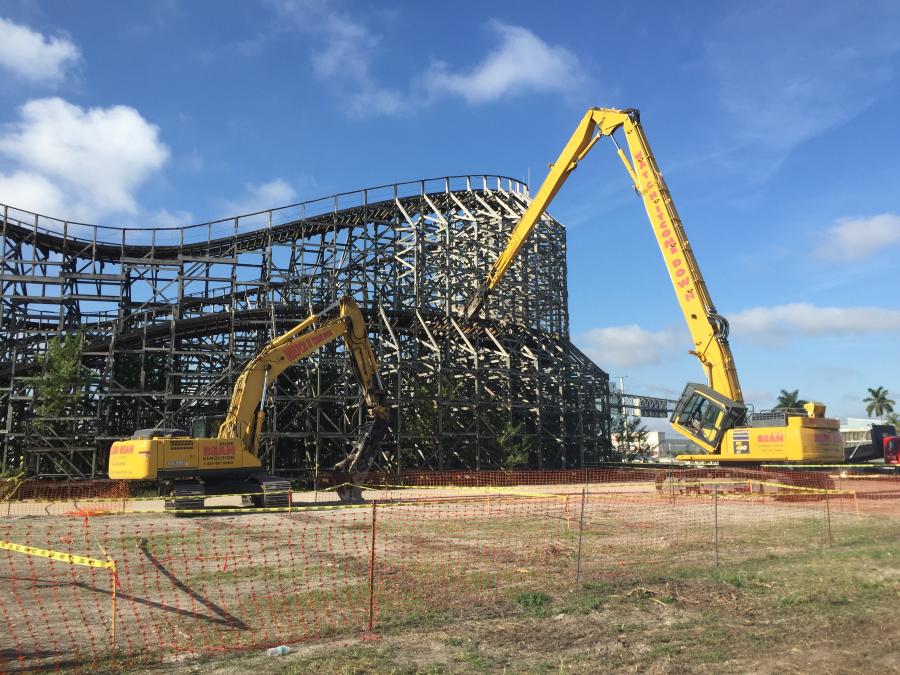 Hoar Construction photo One of South Florida’s largest mixed-use projects is experiencing its share of twists and turns, as crews in Dania Beach bring down an iconic roller coaster at the site of a former amusement park.

One of South Florida's largest mixed-use projects is experiencing its share of twists and turns, as crews in Dania Beach bring down an iconic roller coaster at the site of a former amusement park. Dania Pointe, a 102-acre development, will include more than 1 million sq. ft. (92,903 sq m) of retail and restaurants, Class A offices, hotels, luxury apartments and public event space when completed; however, workers must first tear down the Hurricane.

“The roller coaster took six months, 100 men and $5 million to build,” said Kevin Bean, who serves as president of AlliedBean Demolition Contractors. “The length is 3,000 linear feet and stands 95 feet at the peak. A total of 1,200,000 board feet of lumber was used in the construction.”

AlliedBean was selected to demolish the structure, which will be done selectively and in phases. The high-profile demolition is expected to take up to eight weeks to complete.

“We have an ultra high reach excavator on site, in order to safely shear the sections of track,” said Bean.

John Goodner, director of operations of Hoar Construction's Florida division, said, “The wooden roller coaster will be demolished piece by piece and then will be hauled off. This will be done very carefully, from the top down.”

Considered a landmark structure, the state's largest wooden roller coaster has been called an eyesore by some, while others are sentimental about the thrill ride, which shut down five years ago. As crews prepare to bring it down, more routine work at the project site is moving along at a fairly steady pace.

“Currently ongoing are erosion control, filling in a pond with 130,000 yards of fill [old borrow pit for I-95], clear and grub, along with the demolition of an old go-cart track and existing structures,” Goodner said. “All concrete is being recycled.

“The scope of work is placing imported fill into the pond. This is hauling in material from off-site and placing the material in the pond. The work takes 120 days.”

Key tasks yet to be carried out include the relocation of existing heavy utility and drainage infrastructure, environmental remediation, road work, mass grading, additional utilities and storm drainage and road work all to accommodate the mixed use-center.

Goodner said, “Pulling a project together like this is extremely difficult from entitlements to permitting, to land acquisition and leasing, etc. From the early stages of the construction side, it requires extensive preplanning, preconstruction, estimating, an extremely seasoned and trained staff and picking the right subcontractor partners. The collaboration between the owner and the subcontractor partners is also extremely key to success.

“Construction will start in phases, as it has already started while the design continues to progress,” Goodner said. “We will be going through site work through the next year, and buildings will start this fall. Once the buildings start, there is large amount of ongoing coordinating that goes on.”

Roughly 500,000 cu. yds. (382,277 cu m) of dirt/material will be moved on the project, with virtually every type equipment used, due to the scope and complexity. Heavy machinery will include multiple excavators, track hoes, back hoes, articulating dump trucks, a variety of forklifts and lulls, cranes, crushers for recycling concrete, crawlers for steel erection, along with man lifts and scissor lifts.

Some of the main materials being utilized will include 72-in. (182 cm) RCP pipe for storm culvert, recycled material from the demolition used for road base, utility piping, storm piping, along with standards such as concrete, steel and glass.

“The early site work has included importing 380,000 yards of off-site fill, clearing and grubbing of the site, filling in the three-acre pond and the demolition of site structures, buildings and the roller coaster,” said Goodner. “Before the property was purchased, on one piece of the property was a mini theme park, including an arcade, two go-cart tracks, mini golf, a bowling alley and pool. On another part of the property it was a Florida sand and silica operation. On a separate piece was single-level office space. The last part of the property was an old tree farm.”

Clearing was approximately 60 acres, and required removing numerous types of trees and shrubs, etc. Another critical task is deep dynamic compaction, which is performed by dropping a 15-ton (13.6 t) weight from a crane in a square grid. The holes that are created are then filled in and compacted. There are two cranes currently being used. The work is expected to take approximately four months.

Goodner said weather has been a minor factor to date, but could be an issue in the future. The most challenging portion of the project, he said, will be the building construction.

“Large retail construction is unique, due to being so tenant driven. Tenants constantly are being added and changed, which results in changes to the construction. However, in retail construction, the end date never changes. This is a huge challenge logistically and schedule wise, but we are very experienced in handling that.”

Goodner was among those on hand for the project's official groundbreaking, which featured a mix of local, county and state officials, along with architects, engineers and Kimco's CEO.

“It was one of the most impressive one's I've been a part of, and there have been many. Kimco did a really good job putting it together. There was a good turnout, good weather and just a really good time. The mayor even got in a track hoe and grabbed a piece of the coaster and pulled it down.”

“It will be a game changer for our city, making Dania Beach a destination point for people landing in the Ft. Lauderdale airport and coming from the seaport, making us a more diverse city with the multi-use development. With the construction and permit jobs it will create over 17,000 new jobs. Approximately 6 million dollars in revenue to the city for the tax space will greatly improve the city's needs for public safety, the youth and elderly.

“It's been overwhelmingly received by the community,” said Salvino. “People are excited to see a new era in Dania Beach beginning. It's an area of importance that will change our city by bringing shopping back to the local area. Being recognized with this project, everyone will know where Dania Beach is — Broward County's first city.”

“As they say in business, 'location, location, location'. How better can you see it than across one of the busiest interstates in the United States? Dania Beach is centered in Broward County, right next to the Ft. Lauderdale airport, Port Everglades seaport, the Casino in Dania Beach, Bass Pro Shop, fishing pier and the Design Centers of America. Dania Beach will be a prime location for any business to succeed.”

New York-based developer Kimco Realty expects the multi-million dollar investment to be a major retail destination in Broward County. The Shops at Dania Pointe will consist of shopping, dining and various entertainment venues, which will serve more than one million consumers living in the surrounding trade area and a projected 15 million domestic and international tourists expected to visit Broward County in coming years.

The second phase of Dania Pointe would be a Main Street filled with retail and restaurants, plus residential towers, two office buildings of 10 stories and 250,000 sq. ft. (23,225 sq m) each, the hotel and structured parking.

Formerly known as the “Tomato Capital of the World,” Dania Beach matured from a farming settlement to an urban city, and assumed the title of “The Antique Capital of the South,” based on its many antique shops in the downtown area. Randie Shane, Dania Beach Greater Chamber of Commerce president, said the Dania Pointe project will be a turning point for the region, because of the job creation and positive economic impact.

“The community is over the moon with excitement. We're extremely proud of this project. We are situated only one exit from the airport and the cruise port with direct beach access, so it will become a leading destination for visitors to South Florida.”

Shane said, “I-95 gives ease of access and huge visibility. We can't wait for completion. We're an undiscovered jewel that will soon be brought into the spotlight.”