Beginning this spring, the northern stretch of Idaho 55 between McCall and New Meadows will have another round of road closures and reduced speeds as work resumes on the Goose Creek Grade project. 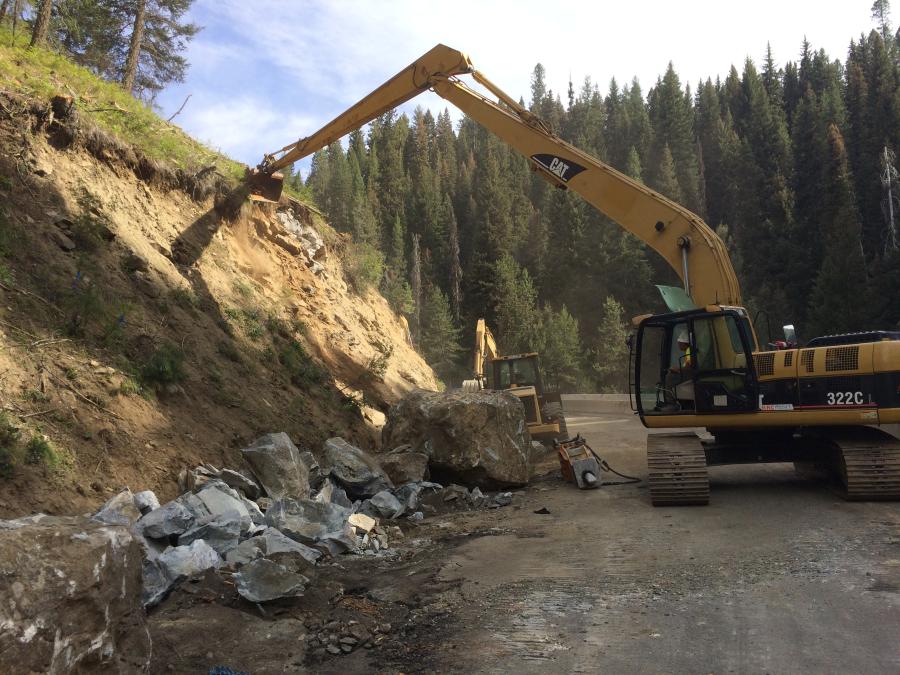 On three of the four curves, Knife River’s crews notched back the hillsides to increase sight distance along the roadway.

Beginning this spring, the northern stretch of Idaho 55 between McCall and New Meadows will have another round of road closures and reduced speed zones as work resumes on the Goose Creek Grade project. With road building and blasting on only one curve remaining, construction is expected to be completed this summer.

Increasing safety along this 2-mi. (3.2 km) stretch of highway was the reason for this $3.1 million dollar state-funded road-maintenance project that was funded in 2015, yet there also is the added benefit of transportation efficiency.

Before this project, trailers using Idaho 55 were “limited to a specific size because as they would go around the corner, they would track out of their lane and veer into the oncoming lane or off the road onto the shoulder,” explained Jim Hoffecker, construction coordinator of the Idaho Transportation Department (ITD).

This meant longer trailers had to detour onto U.S. 95, which is a less efficient hauling route to and from Boise. With the Goose Creek Grade project calling for a widening of the road radius and notching the corners back on four curves, longer trailers can use Idaho 55 once the project is finished.

The Boise office of Knife River was awarded the contract and received notice to proceed at the end of March 2015. With the project requiring the blasting of cliffs to increase sight distance along the roadway and the construction of mechanically stabilized earth (MSE) walls to flatten out the road's curve, Josh Young, an estimator and project manager at Knife River's Boise office, said that his company has significant experience in constructing these types of walls. Their past work for the ITD also can be seen on Highways 21, 55, and 17. For the blasting and cliff work, Knife River subcontracted these operations.

The blasting portion that was needed to notch back the corners along the curves impacted travelers the most because it required lane closures in both directions between 6:00 p.m. and 9:00 p.m.

“When we were doing the blasting operations, we would send out notices on those days, letting people know that the road would shut down for this time and they would stay in the towns, New Meadows and McCall, later,” Hoffecker said. “And then we would send out an email to let them know the road was opened back up to get them through again. We worked with the local residents as much as we could to keep the impacts to a minimum.”

Although the crews only had a three-hour window to complete the blasting operations, Young said that there was only one time, working on curve one, that they came close to running up against the deadline.

“It was pretty efficient,” he said of blasting. “With the different rock formations up there, you never know how it's going to go, but it really has gone well.”

In the areas where slope work was done, there is the potential for future instability, but Hoffecker said that “the work we're doing to stabilize the slopes should prevent future slides. If we have to do work it will be in other areas, not on these four corners.”

On one of the curves, extra work was required to pull out extra material to stabilize the slope, which is one of the reasons why we didn't finish this year, Young explained.

“We identified some problems and just went ahead to take care of them. Hopefully we won't have to go back in.”

Although the blasting portion is the most visible portion of the Goose Creek Grade project, the significant work was building the MSE walls on the downhill side.

“[The motorists] see us taking rock off the uphill side because it's easier for them to see when they're driving through there but we're also building road out in the other direction,” Young said. “Before we have room on the uphill side, we have to build out those MSE walls on the downhill side. That way we can shove traffic out further away from us and allow us to do that [uphill] work.”

At the project's peak, Young said they opened up work sites on two of the four curves. While the Knife River crews worked on building out the MSE walls and doing grading work, the rock scaling contractors were hanging mesh, drilling for slope protection, and preparing for blasting. Hauling off the material required a cycle of five trucks, which worked for us most of the time to account for how far we had to haul and load the trucks, Young said.

Of the nearly 4,000 cu. yd. (3,058.22 cu m) that has been excavated thus far, most of the rock saw a second life through salvage rather than being dumped in the landfill: The Payette National Forest took some of the material, as did Adams County.

“For being as technical as this project is and how everything has had to advance up there, we've done everything quite safely so far. We haven't had any accidents or issues,” Young said. “Everything has gone very well so far. Surprisingly well, especially handling that volume of traffic in such a tight spot. Traffic has been a huge concern because there's a lot of people and it's tight up there. But fingers crossed, everything has gone well so far.”

“For us it's been a really good project,” Hoffecker added. Even during the 4th of July holiday traffic weekend, they didn't experience any traffic issues. Instead of hiring flaggers who would have to work 10-hour shifts, we contracted with Missoula-based Superior Traffic Services which provided live-feed remote traffic monitoring, he said. “We were really impressed with them, and we didn't even know they existed before this project.”