Idaho's Sequoia Tree Has Storied Past, Moves to New Home

St. Luke's Hospital could have cut it down, but opted instead to give the tree — the oldest and largest sequoia in Idaho — to the city of Boise and relocate it to a park, two blocks away. 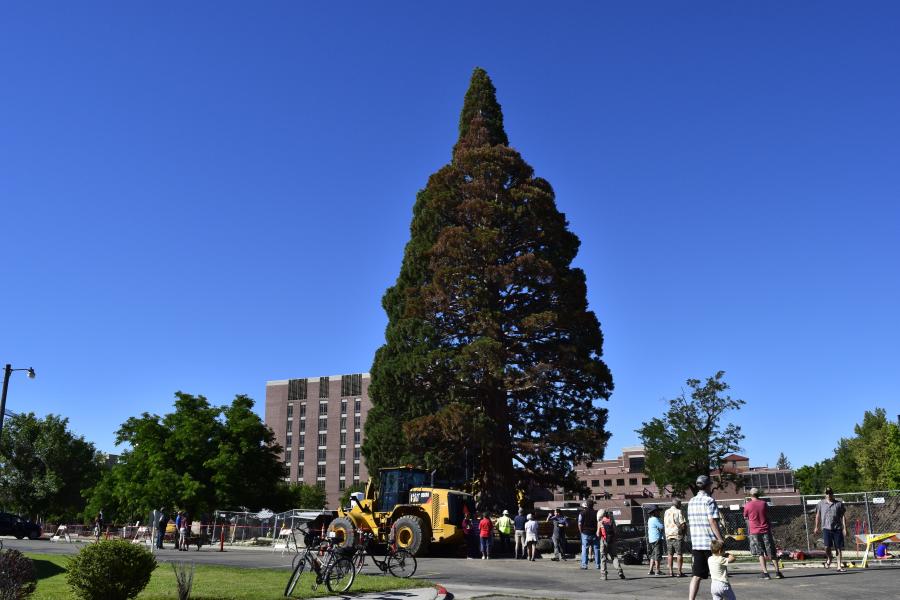 Cox and his team will check on the sequoia and monitor its health for the next five years. If cared for properly, it could live another three to five hundred years.

Bystanders in Boise were recently treated to a sight they're not likely to witness soon, if ever again — the relocation of a 98-ft.-tall, 800,000-lb. sequoia tree planted in its original spot at St. Luke's Hospital 105 years ago.

David Cox, western region vice-president for Environmental Design Inc., orchestrated the move. He recalled the first conversation he had with St. Luke's about the tree.

“We get a lot of calls saying 'I've got a tree to move,' and we get people who say 'I've got a big tree,' but I was at my desk on my computer and then he started describing the tree. Then I'm looking at Google Earth at the same time and he told me where it was, and I was yep, you got a big one alright.”

The tree had to be moved to make way for the expansion of St. Luke's downtown Boise hospital. They could have cut it down, but opted instead to give the tree — the oldest and largest sequoia in Idaho — to the city of Boise and relocate it to a park, two blocks away.

The sequoia was original a gift from Emile Grandjean, a conservationist, to Dr. Fred and Alice Pittenger. But it was only as the word spread about the relocation of the tree, that St. Luke's learned the rest of the story.

“The Grandjean granddaughter reached out to us and told us the other story which was that her grandfather received four seedlings from John Muir,” said Anita Kissee, St Luke's public relations manager. “Two of the seedlings went to the Grandjean family and he gave two to Pittenger. This is the only one that survived.

“For us it was never a question of saving the tree. We knew the historical significance. We knew the significance to Idaho and to St. Luke's. We're just really pleased how well the whole operation went. Now that we know the connection to John Muir, that just solidified the fact that we did the right thing to preserve this tree. It would not have survived if we'd tried building around it.”

“We used a high-pressure air hose to open up areas of soil to see what we were dealing with. We determined there was no significant roots outside the 40-foot diameter root ball. We made a four-foot deep root cut and put in a root barrier at the same time, then covered it all back up. We started hydrating it and we were trying to give the tree time to rest.”

In June, Cox and his crew returned. They opened up the root cut and saw the new roots they'd hoped for. They encapsulated the root ball again with burlap to keep it wet and encaged it with field fence. They used plywood to build a structural floor and keep soil wall rigid.

“It's like picking up big wedding cake,” Cox said. “If you don't have that piece of cardboard, you can't lift the cake.”

Next, they installed a double layer of 7-in. pipe on 10 in. centers with 4-in. pipe in between to construct a closed bottom so no soil could escape. On top of the pipe, they laid a beam and sewed the pipe together with 5-in. chain for rigidity on both sides.

“Once we had that we started putting in our arbor lift bags,” Cox said. “These are giant air bags about 44-feet-long. They look like a giant hot dog. We typically inflate only at 18 psi. Tires on cars are typically at 35-40 psi. As we inflate, the tree just kind of comes out of the ground. We inflated two bags and added another and another until eventually there were six bags under the tree, and we were ready to tow the tree. The first initial move is the most difficult as you are towing 800,000 pounds up the soil ramp we made. We underinflate the front bags and overinflate the rear, so we're coming up that slope by making a cheese wedge so it rolls up hill. Just one of the tricks of the trade. Once we got onto grade now we're on level ground. We had the tree on grade on Friday.”

On Saturday, crews took all the soil from the original location to build a bed of soil in the new location in Fort Boise Park. By using the exact soil the tree grew in, they eliminate pH and drainage issues.

“Once it was in position, we put in wells beneath the tree, dug down to water bearing sand and perforated the ground so we know it can drain,” Cox said. “We drilled down to the sand and put in sewer pipe and connected it in four different spots so that as the tree is watered any water can run through the soil and into ground water and never accumulate. And then we backfilled it with salvaged soil, and then we put in an irrigation system, series of irrigation heads that spray into the tree. And then I put another line up into the top of the tree, goes up 100 feet. It has a little sprinkler head that comes on every afternoon for one and a-half hours. We wanted to give it every advantage possible.”

Cox and his team will check on the sequoia and monitor its health for the next five years. If cared for properly, it could live another three to five hundred years, Cox said.

“The community really does have a historical artifact. They'll all have ownership of this tree from now until here forward.”

View the move below: