In Full 'Blume' — New Bridge Over I-84 Takes Shape 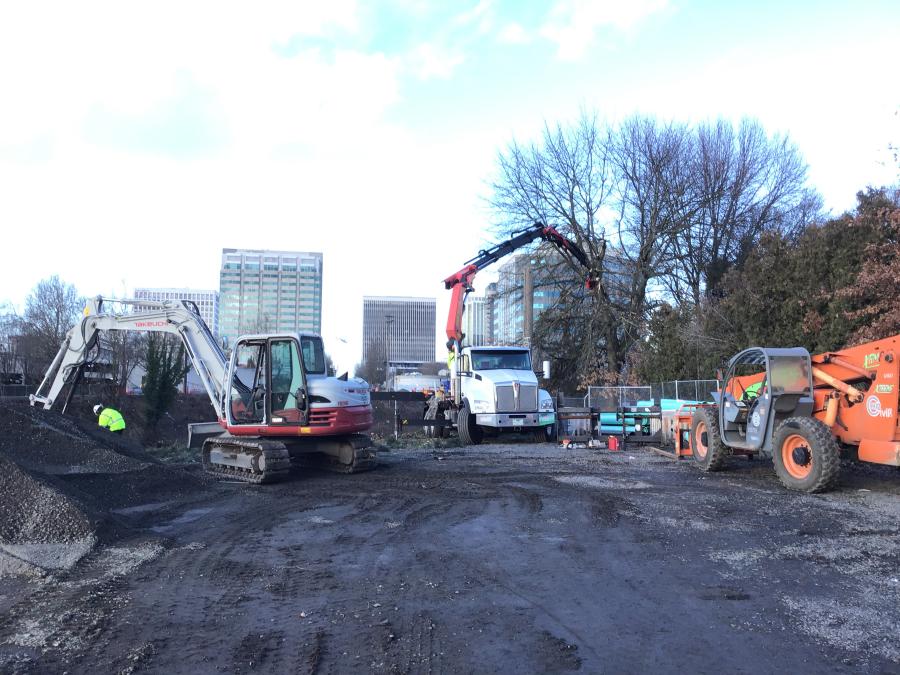 HP Civil is serving as the general contractor on the Blumenauer Bicycle and Pedestrian Bridge Project over I-84, while Ness Campbell Crane and Rigging is handling the bridge launch operation. (H.P. Civil photo)

Ground was broken on Nov. 7, 2019 for the construction of the Portland Bureau of Transportation's (PBOT) $13.5 million Blumenauer Bicycle and Pedestrian Bridge over I-84, a project being built by HP Civil Inc. 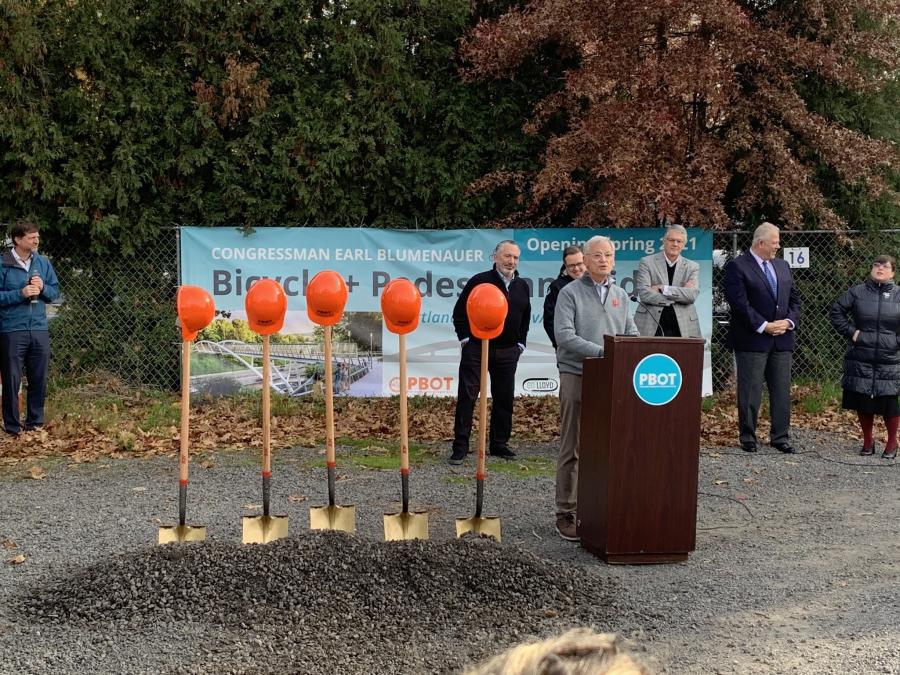 The new bridge, 435-ft. long and 24-ft. wide —between 7th Avenue on the north side of I-84 to 7th Avenue on the south side — will span over seven lanes of I-84 traffic, two active Union Pacific railroad lines and Sullivan's Gulch. It will feature a 10-ft. wide pedestrian path and a 14-ft. wide path for two-way bicycle traffic.

The construction launch was attended by neighborhood advocates, community members, PBOT officials, Portland Commissioner Chloe Eudaly and U.S. Rep. Earl Blumenauer for whom the bridge is named after.

The initiative is being financed by Prosper Portland ($4.5 million), PBOT through Transportation Systems Development Charges, and the Oregon Convention Center Urban Renewal Area, as well as $250,000 each from the non-profit transportation management association Go Lloyd and the Central Eastside Industrial Council.

The construction plan is based on building a bridge foundation on the south edge of Sullivan's Gulch and two foundations on the north side. A temporary tower (scaffolding) will be placed between the I-84 freeway and railroad tracks to aid with erecting the bridge, and the bridge itself will be assembled on NE Seventh Avenue at Flanders Street on the south side of the freeway.

Late this year the bridge will be moved into place across the freeway and onto the temporary tower. This installation will require a full closure of I-84 in both directions for one weekend, and following this, crews will erect the balance of the structural steel spanning to the north landing.

So far, HP Civil has removed trees and crews are installing approximately 1,000 ft. of new storm and sanitary sewer lines on 7th Avenue.

"We're waiting on utilities — power, gas, telephone, and fiber-optics — to be relocated," said Larry Gescher, HP Civil's Project Manager. "Power is the one we've been waiting on the most.

"The mainline is all in and we're just going back and tying in all the sanitary sewer laterals to the property owners and installing the storm inlets," said Gescher. "We closed down 7th Ave. one block at a time and trenched down about 12 feet, installing 18 inch through 12 inch combined storm/sanitary sewer and four big manholes. We should be finished in a month. 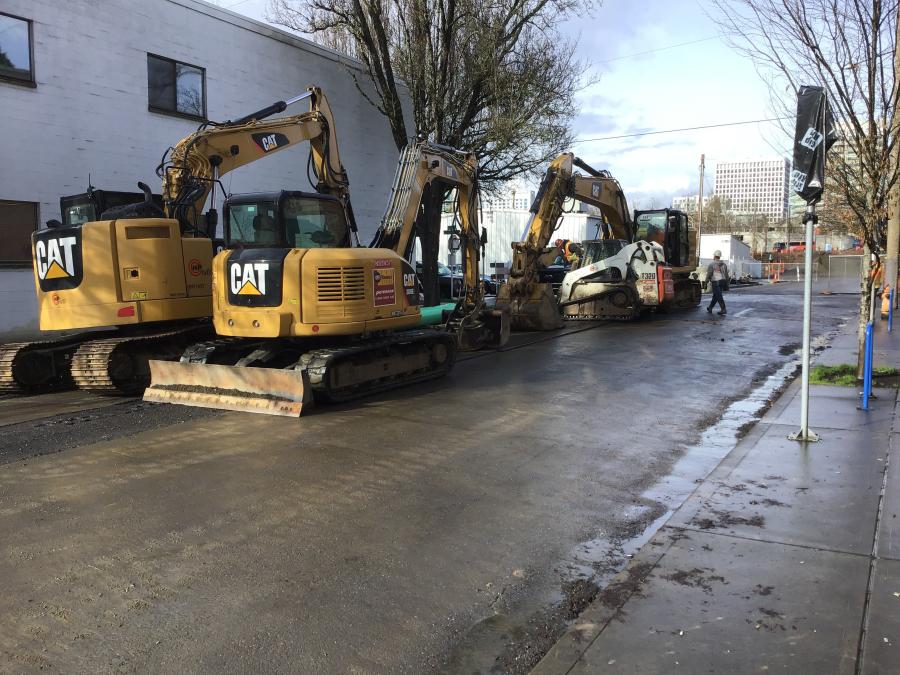 The older existing 8-inch pipes are being left in place. Over the years they have undergone lining to extend their lifespan and have less capacity. The trench was five feet wide for the 18-inch pipe and then dropped down to three feet for the smaller pipes.

The material being removed was disposed of at an old quarry site in Canby.

The goals of the 2020 construction season are to complete all foundations, sewer work, build a temporary bridge at the north end to place a crane, and erect all of the structural steel.

The foundation work won't be easy.

"On the north end, we have a big excavation to do with a wall system that is about 30 feet tall and will also support the bridge," said Gescher. "We will start by excavating into the hillside and using lightweight concrete and a welded wire wall system to create a wall. The face of the wall will be vegetated. The bridge will be founded on micro-pilings at three bent locations. The North end of the bridge is founded on a large fill, which also supports Lloyd Blvd. Light-weight concrete is being utilized to ensure that the north slope remains stable.

"The south side foundation will also have micro-piles," he added. "There will be an intermediate foundation in the middle towards the north end. We'll have railway flaggers on-site any time that our operations might foul the tracks with our cranes or bridge components that are being erected over the tracks."

The scaffolding for the temporary tower will be erected on railroad property, but the movement of railway freight will not be interrupted. It is critical as it will be supporting the main piece of the steel arch bridge spanning over I-84 is nearly 500,000 lbs. The total structural steel weight of the bridge is 850,000 lbs.

"It will able to support the full weight of the bridge," said Gescher. "Once it's in place, we'll build the rest of the structural steel overland to the north of the interstate. Once the structural steel is erected we will install a cast-in-place concrete deck and then we'll remove the tower."

Thompson Metal Fab Inc. is supplying the structural steel for the bridge, which is Grade 65 (65,000 lb tensile strength).

The concrete bridge deck, 7.5-in. thick, which will be formed before the bridge is launched over the interstate to minimize impacts to the traveling public. West Side Iron Inc. is the subcontractor erecting the structural steel. 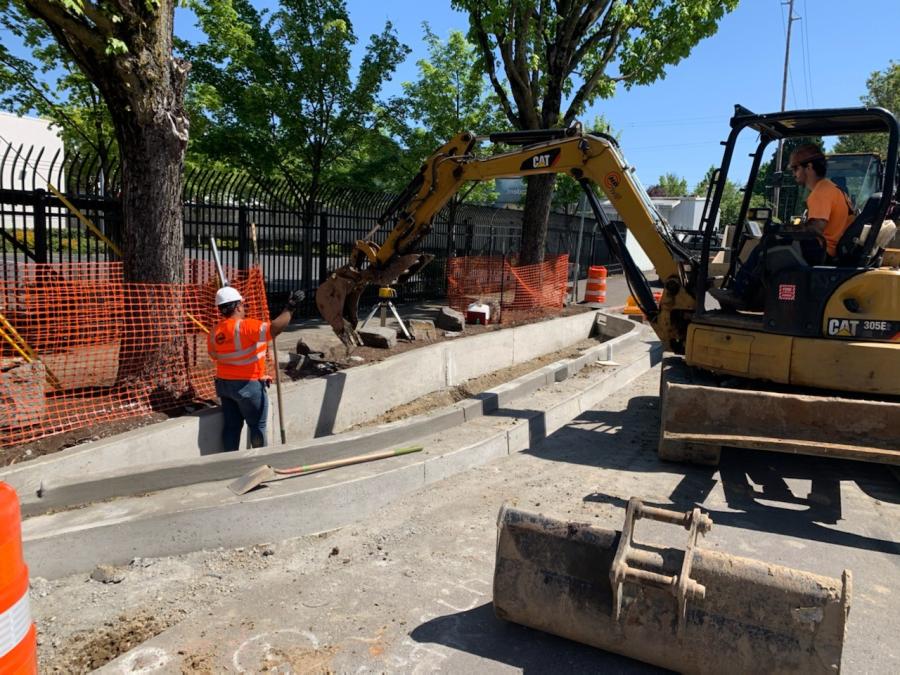 Bridge assembly is expected to start in November with main part to be ready for launching in December, which will be performed during a weekend closure of the interstate.

"The challenging part is the amount of welding we have to do in the field," said Gescher.

A dolly system will be employed to roll the bridge down 7th Ave. to the point a 550-ton crawler crane positioned on I-84 can reach the end of the bridge.

"The crawler will pick the leading end, while the tail end will continue to roll down 7th Ave. to the point a 600-ton hydraulic crane can pick the tailing end," said Gescher, "The two cranes will then set the span into place spanning over I-84. Ness Campbell Crane and Rigging, which owns the cranes, is handling the bridge launch operation. HP Civil will be utilizing a Link-Belt 218 Hylab 110-ton crawler crane to support West Side Iron during the erection of the structural steel and to support their own crews during the balance of the construction."

"It is always fun when we get to work on an alternative delivery project with good team members," said Gescher. "Each member is committed to making the project a success for everyone involved."

A typical crew will consist of four to five HP Civil employees on-site, which will increase to 25, including subcontractors, when the bridge launch operation commences. The project includes 32 percent participation from Disadvantaged, Minority-Owned, Women-Owned, Emerging Small Businesses, or Service Disabled Veterans Business Enterprises (D/M/W/ESB/SDVBE) including an equity partner, West Side Iron, a minority-owned Oregon company.

"The key is to build up good relationships and bring in the people that can do a good job," he said. "We've done a lot of work with West Side and they're a really good subcontractor."

Originally called "Sullivan's Crossing" during its design and development, the bridge was officially named after Blumenauer by Eudaly in May 2019 to honor the Congressman's steadfast, decades-long advocacy for cycling and pedestrian issues in Portland and across the country. The project includes two new public plazas and landings on the north and south sides of the bridge.

"A bike commuter since 1973, Congressman Blumenauer first began biking to work when he became a state legislator, riding regularly from his apartment in Salem to the Oregon State Capitol," stated a PBOT web page for the project. "As a member of the Portland City Council from 1987 to 1996, Rep. Blumenauer launched and provided critical leadership on many of the bike initiatives that are staples of Portland today. The Blumenauer Bridge will serve as a vital connection for pedestrians and people biking between two of Portland's fastest growing neighborhoods — Lloyd and the Central Eastside — and beyond. In the future it will also serve as an important link in Portland's Green Loop.

The bridge, called for in the Central City 2035 Plan as part of a larger ‘Green Loop,' will provide a safer, more convenient connection for people walking and cycling between the two bustling areas. 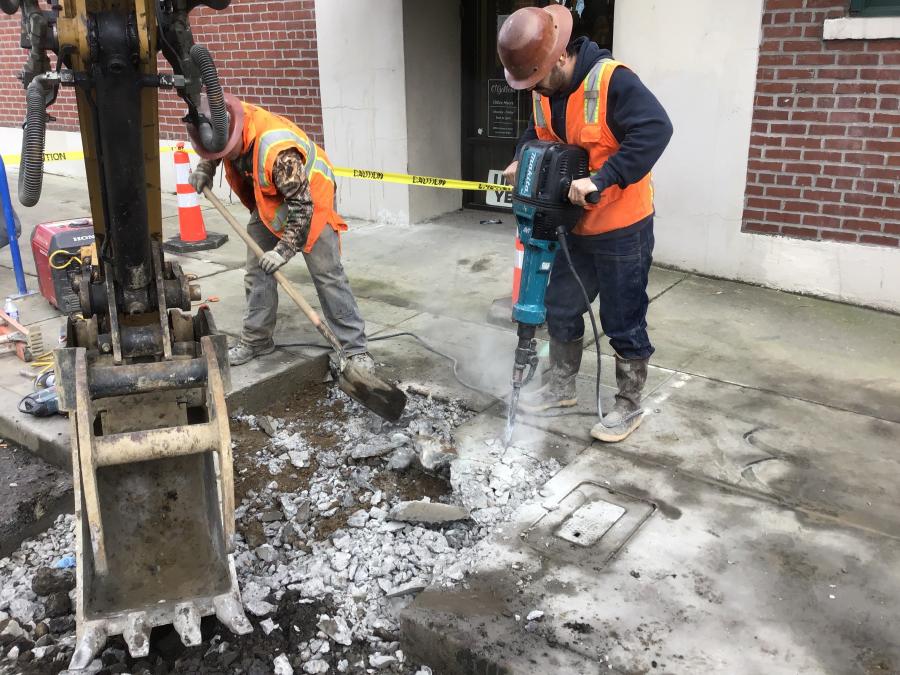 "[The location will] best serve the geographic centers of both districts, link to existing and planned bike routes, and reduce conflicts with truck traffic," stated the press release. "The nearest existing connections, on NE Grand Avenue and NE 12th Avenue, are substandard for pedestrian/bicycle use and have significant conflicts with freight and automobile traffic."

In 1996, under Blumenauer's leadership, Portland adopted its first citywide Bike Plan which laid out a 20-year vision for 600 mi. of bikeways across the city. Elected to the U.S. House of Representatives in 1996, Blumenauer founded and co-chaired the Congressional Bike Caucus, and he recently introduced the Vision Zero Act of 2019 that would allow communities to access federal transportation funding for designing and implementing Vision Zero programs that work to eliminate serious and fatal traffic injuries.

"It is an honor of a lifetime to be associated with this bridge," said Blumenauer at the ceremony. "I have long advocated for a safer connection for cyclists and pedestrians between the Lloyd and Central Eastside districts. This is a statement of Portland's values and culture for us to celebrate and build on."

The bridge was designed by the Portland-based firm KPFF Consulting Engineers and the landing plazas were designed by ZGF Architects.

"[It] will be seismically resilient and serve as a backup route for emergency vehicles over I-84 in the event of an earthquake," stated the web page, "[The bridge's] alignment requires a longer bridge that may be more expensive to build, but offers better connections to existing and planned cycling infrastructure to the south, better sightlines of the bridge, and more room on the south side both for construction staging and for the eventual bridge landing."

The general contractor purchases and rents equipment from dealerships such as Peterson CAT in Salem and Pape's Equipment in Portland. Sitech provides all of the GPS equipment control systems.

"The dealerships make sure we have the right equipment for the job and Peterson quickly had a replacement module shipped to us from the east coast — it's all about how well you will be supported to keep equipment maintained and operating efficiently," said Gescher, who noted that HP Civil recently purchased the Link-Belt crane for the project (it is being delivered from North Carolina) and the Cat excavators about six months ago to meet Tier IV emission standards that are beginning to be mandated on projects.

As president of the Oregon AGC in 2015, Gescher testified against bringing California-style diesel emission standards to Oregon. Since then Gescher has stayed active in the diesel emission discussion in Oregon.

*HP Civil has also invested in 3D-modeling equipment and controls. The foundation subcontractor is bringing in a variety of drills for the micropiles. CEG