In West Alabama, 'Skepticism' Turns Into 'Optimism' for a New U.S. 43 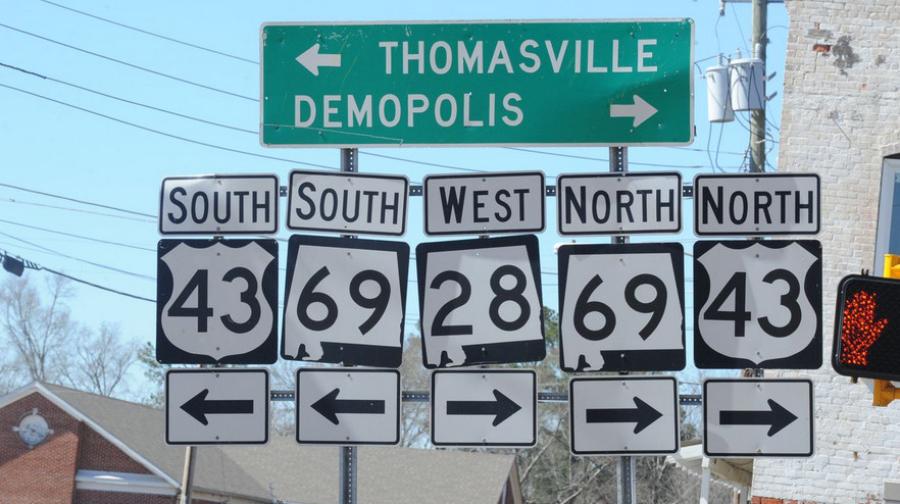 Alabama Gov. Kay Ivey said during her 2021 "State of the State" address that the state will "turn the shovel" on a four-lane U.S. 43 through Alabama's Black Belt region.

Alabama Gov. Kay Ivey's announcement in February that U.S. Highway 43 would be widened from Thomasville to Tuscaloosa brought back long-ago memories for Cindy Neilson.

Neilson was a Marengo County probate judge when she, along with former Linden Mayor Roy "Pat" Vice, often visited with former Alabama Gov. Fob James to discuss the importance of a U.S. 43 corridor through west Alabama.

Indeed, a project that has been discussed and planned since at least the early 1990s — if not longer — was prioritized in Ivey's State of the State address earlier this year. The project is "absolutely happening," according to an Ivey spokesperson, and is part of the governor's goal in reducing the number of counties in Alabama, now at 17, that have no four-lane connectivity to an interstate.

With it, towns along the way hope the new road ushers in economic growth to an area that hasn't had prosperity visit in some time.

The project will be financed through Rebuild Alabama, a program adopted by the Legislature in 2019 and financed by the first increase to the state's gas tax since 1992. The final two cents to an overall 10-cent tax increase will be added this fall.

"As [Ivey] said in her State of the State address this year, our state's roadways are the arteries of commerce, and she remains totally committed to making this long-await project a reality," said Gina Maiola, the governor's spokesperson.

The U.S. 43 project also will be under construction before the end of 2021, even though no corridors or bypasses around cities have been identified. The project's estimated overall costs also have not been disclosed by state officials.

But the mechanism the Alabama Department of Transportation (ALDOT) is looking at in building the road is geared toward fast-tracking its construction. The U.S. 43 project will be Alabama's first "design-build" project, a method in which the design and construction contracts are combined into one bid. Officials say the method can speed up construction, as opposed to traditional design-bid-build contracts in which multiple contractors are part of one project.

The method has been growing in popularity throughout the United States since it first became an experimental concept for transportation departments in 1988. Alabama lawmakers, however, only gave ALDOT permission to pursue the method in 2017.

Tony Harris, a spokesperson of ALDOT, said the design-build concept will give state officials latitude to work with a team of designers and contractors to speed the project along.

"If they design the first four miles, they can then get started with construction and [continue] to design as they go," Harris said, noting that 4 mi. is an arbitrary number and that the exact design and construction method has not been determined.

Though Ivey is calling the project a "widening," ALDOT refers to it as a new north-south "corridor." It also will be the only north-south four-lane highway through Alabama west of Interstate 65.

Harris said studies are under way to determine how much of the existing U.S. 43 will be widened, and whether alternative roadways off the highway's alignment will be needed to complete the connection from Thomasville to Tuscaloosa, approximately 100 mi.

"It would be, to the greatest extent possible, still along the existing routes," Harris said. "We have to look at the current conditions of the roadway and where it goes and what the impacts will be. Some of these are environmental and development-related and we want to make sure that we minimize these impacts where we can."

Also unknown is where the project begins.

Harris said no determination has been made, though he added there might be some benefit from beginning with the four-lane U.S. 43 in Thomasville. The existing four lanes of the highway, which connect Mobile to Clarke County, ends in Thomasville.

Sheldon Day, the longtime mayor of Thomasville, said his city is ready to see the project begin and has a message to community and industrial leaders north of his city: Get prepared now.

"We've been waiting for many years for this project and for someone to champion it and move it forward," said Day. "We were always told it was on a five-year plan, but it was never done. I think it's one of the reasons that so many in our region are skeptical [that it will happen]. But now is the time to embrace it. We need to turn our skepticism into optimism and motivation, so we are actively working with the governor's office and ALDOT to promote the project going forward."

The opportunities, Day and others said, are "generational" but only if cities are prepared.

"Each community along this route needs to plan and work hand-in-hand with the state," he continued. "When the highway is built, if it's a bypass [around a city], you don't want that bypass to totally hurt your community. You want to make sure there is infrastructure extended to the exit. It all needs to be effectively planned."

Could New U.S. 43 Bring Back Residents?

The opportunities are not only with adding businesses to a new corridor. It also could mean bringing residents back to declining rural towns.

In Linden, city and school officials are hopeful a new U.S. 43 will enable residents to remain in the community and commute to Tuscaloosa for work.

"People always say small towns are dying," said Gwendolyn Rogers, Linden's first elected African American mayor. "But there is a lot we can do to make sure that they don't."

Rogers said she believes the project will increase economic opportunities for Linden, a town of 1,800 residents, while making U.S. 43 a safer road. But she also said she is concerned about what a potential bypass might mean for the city. The existing U.S. 43 traverses through the heart of the community. Downtown businesses, including City Hall, hug the existing roadway. An additional two lanes would be impossible without demolishing much of the community's business district.

"Of course, it's a little concerning anytime you bypass an area," she said. "It reduces the amount of traffic that could come through here. While there are things you are excited about, there will be drawbacks. We are working hard to build our city up to where people will want to go through, and to have some attractions here in town so they can come out of their way and see why things are good in Linden."

Demopolis, the largest city along the route between Thomasville and Tuscaloosa, also is the only one with an east-west corridor running through it. U.S. Highway 80 connects to Selma and Montgomery to the east, and Meridian, Miss., to the west.

The only portions of U.S. 43 widened to four lanes along the corridor are where it merges with U.S. 80. Unsurprisingly, the road is filled with commercial activity from fast-food restaurants, motels and convenience stores.

"If we can get a north-south on U.S. 43 to a four-lane, it just gives us the ability for so much transportation that a two-lane doesn't afford," said Demopolis Mayor Woody Collins. "The biggest hurdle we have right now is the state identifying a path [for the expanded highway]. The growth potential is tremendous [but] it's about finding the location and preparing for it."

A new U.S. 43 corridor also will make the road safer while keeping large trucks from rumbling through the small downtowns along the existing roadway.

Bypassing trucks off the two-lane highway is also supported by the timber industry, the dominate industry in western Alabama. The industry leads all farm and forestry sectors in term of economic impact for Alabama, generating $21.4 billion annually and employing more than 122,000 of the state's residents.

On U.S. 43 is Two Rivers Lumber Company, a sawmill in Demopolis. The company is owned by Roy Geiger, who, for the past 35 years, has also owned Sumter Timber Co. in town. He said the current road is "restrictive from a safety aspect," while adding the widening effort "would be a great benefit and would open up a lot of trade areas for us."

Justice Smyth, outreach director of the Alabama Transportation Institute at the University of Alabama, said that "there are many safety countermeasures which may be included in construction projects to reduce [crash] occurrences and severity, for example alternative intersections, turn-lanes, minor alignment modifications, shoulder improvements and roadside recovery improvements."

He added that one of the major criteria for business leaders and site selectors in locating to a community is "available access to a four-lane highway or interstate." Timely delivery of raw materials — such as timber — is important for businesses that look to expand.

The final hurdle could be convincing doubters that the project is happening and that no more delays will occur.

"My personal observation to this is ‘please break ground and spend money so we don't back off of it,'" said Collins. "We know different [governors] switch things. If they get enough money tied up on the ground, they can't back away from it."

Phillis Belcher, executive director of the Greene County Industrial Development Authority, said she believes it's happening. She's optimistic despite the fact the promises of a four-lane U.S. 43 have existed for more than a quarter century.

"What we've seen in this governor is she's truly committed to rural Alabama," said Belcher. "And that crosses the line with her own staff and her directors. I'm really optimistic it will happen."