Walsh & Kelly was very keen on seeing if it could make the job easier and more precise by mating the technologies of two leaders in their respective industries. 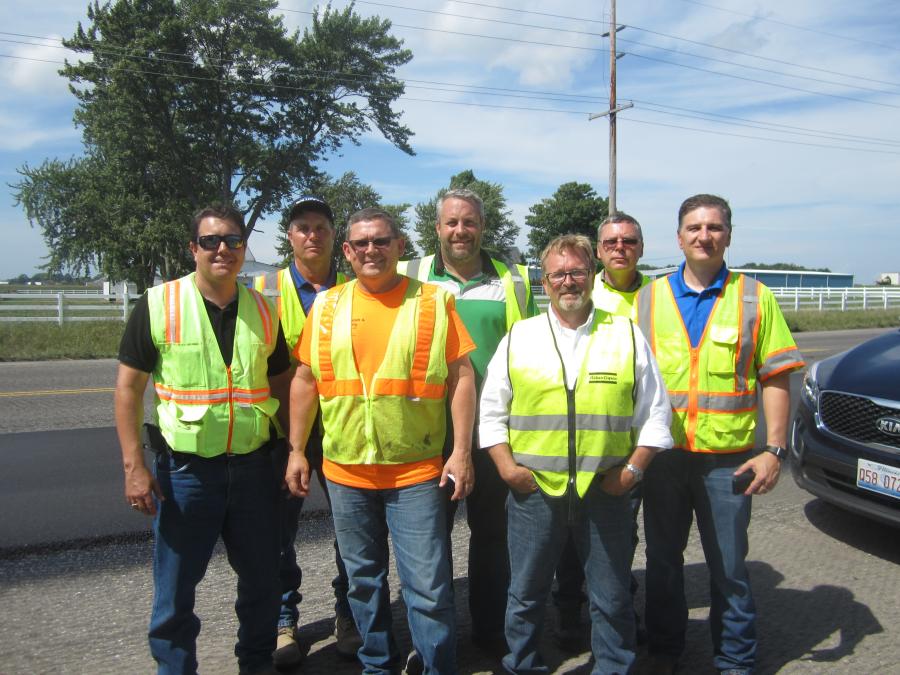 “This road project is known as a higher upper-category mix, meaning it is built for heavy traffic and is generally tougher to get compaction on,” said Jim Padgett, Walsh & Kelly quality control manager. “We will use a total of 18,000 tons of mainline, or driving lane, surface.”

The Best of Both Products

Walsh & Kelly also was very keen on seeing if it could make the job easier and more precise by mating the technologies of two leaders in their respective industries.

The early results look as if Walsh & Kelly's instincts were correct.

The South Bend-based asphalt paving, grading, concrete and excavation company, with locations across the northern half of the Hoosier State, has developed a more than 80-year-reputation of providing excellent services.

When it began work on resurfacing Indiana state Road 19, a north-south highway that passes along the east side of the small town of Wakarusa, southeast of South Bend, Walsh & Kelly decided to use two Atlas Copco/Dynapac CC 5200 double drum vibratory rollers.

But, the paving contractor also wanted to employ the machines side-by-side and in tandem. In order to make the process work more efficiently, the company knew it needed their operators to be able to coordinate their movements more effectively than in the past — and without the guesswork.

So, Walsh & Kelly turned to its equipment dealer, West Side Tractor Sales Co. in nearby South Bend, for solutions.

West Side Tractor was able to put its customer together with Atlas Copco/Dynapac and Topcon Positioning Systems, a manufacturer of geo-positioning and precision technologies in construction, for a demonstration at the Route 19 job site.

“We wanted to try some of this new technology and when we approached West Side Tractor they jumped in with both feet,” he said. “We couldn't have asked anything more from them.”

The Topcon technology is designed to go beyond simple pass count registry and, through its secure connectivity to the global Sitelink3D Enterprise service, gives each compactor the ability to work faster and provide constant results to the system.

Success on Every Level

After just a few days, the results seemed to please everyone.

“The demo has been going fantastically well,” said Tim Hoffman, product manager of rollers of Atlas Copco in the United States.

“We're happy to be able to bring out two machines on a request from Walsh & Kelly. They really are the company that is spearheading intelligent compaction in Indiana. It was a good invitation and it helped us get two Topcon systems on our rollers and see them communicate with each other.”

He said that he and his colleagues are able to see both rollers' uploaded information on an internet cloud. They also can get a live view of the rollers' pass count and can gauge the machine's temperature, which, by using the Topcon C-63 systems on the machines, will plug that data directly into their own temperature sensors.

Not Your Father's Compacting

Jerry Bickner, the president of Topcon Solutions in Indiana, also was very happy with the results of the tests. His full-service Indianapolis dealership provided and installed the C-63 system on the Atlas Copco/Dynapac compaction rollers for use on the Walsh & Kelly road project.

“From a hardware standpoint, each of the rollers are equipped with the same Topcon C-63 Intelligent Compaction components, which include an operator interface box that is going to give each operator a graphic representation of the roadway,” he said. “It will also have a GPS receiver inside consisting of an internal cellular modem hookup as well as a GPS antenna roof-mounted on the machine. We are most interested in having a very tight horizontal position.”

Those rollers also are connected with a virtual reference station in order to receive corrections, Bickner said, eliminating the need to set up a local base station at each work location and moving it up and down the project as the crews move.

“Essentially, we turn on the unit, we're connected, and we go,” he said. “The job site is set up remotely from a PC and is wirelessly connected to the machines, meaning they can also receive updates. That also gives us the capability to see what the machine is doing and to remotely support and troubleshoot it. With the C-63 Enterprise solution that we have here we are going to be getting reports detailing all the information we mentioned earlier, as well as data showing that we have met regulatory intelligent compaction values.”

Bickner said that meeting those regulatory standards is an important requirement for many contractors as those specifications have become tightened in recent years by various state and federal agencies. Therefore, having a highly-precise method of recording and reporting those benchmarks, such as that provided by the Topcon C-63 Intelligent Compaction system, is increasingly valuable.

“We chose Topcon to provide its system on our rollers because its products are so well-crafted and they have always given the best service in the United States,” said Hoffman of Atlas Copco/Dynapac. “Another factor was that they have so many outstanding local dealers, like Jerry Bickner here in Indiana.”

Walsh & Kelly Inc. has served northern Indiana since 1933. It has offices/asphalt plants in South Bend and Griffith, with additional plants in Lowell, Valparaiso and La Porte. The company's clients include industrial companies, the Indiana Department of Transportation (INDOT), local municipalities and businesses. As one of the largest civil contractors in that part of the state, with multiple plant sites and varied services, it can meet all project specifications in an effective and efficient manner.