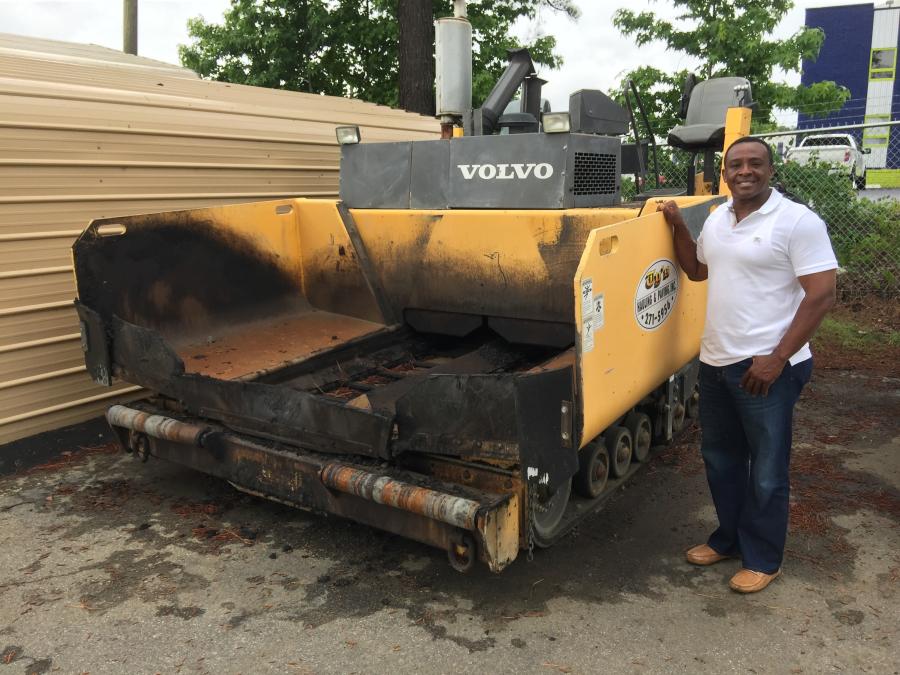 If anyone thinks the American work ethic is a thing of the past, then they need to meet Malcolm E. Thomas.

The CEO and president of Ty's Hauling & Paving Inc. in Richmond, Thomas has achieved tremendous success and respect through the rock-solid principles of hard work and integrity.

Founded in 1994, his company has grown from a modest one-man operation to one of the area's most well regarded mid-level construction firms.

The company began as a dream in the mind of a young teenager watching paving crews work on the main highway, Route 13, near his home on Virginia's Eastern Shore.

“I used to watch them pave that road and I always wanted to own the equipment and do that myself,” Thomas said. “After high school, my first job was working for a guy paving driveways. I didn't know anything about the business, so I started out as a shovel man/truck driver and I worked 11 to 12 hours a day, sometimes six days a week. Soon, though, I was trained on how to grade and pave a driveway.”

Thomas later moved on to a bigger paving company in nearby Ashland where he was able to work on parking lots and small roads, as well as learn to operate a tar distributor and how to watch for the different elevations in a roadway.

After several years with that firm, Thomas joined another company where he worked from 7 a.m. until 2 p.m. Then, he would report to work at Philip Morris USA in Richmond at 3:30 and work until 12 midnight.

He did that for five years, and because of the benefit package he received from the cigarette manufacturer, he was finally able to purchase his first dump truck.

“I knew that I couldn't afford to buy all the new paving equipment available and hire a crew, but I knew that I was skilled enough to pave a driveway without a paving machine,” Thomas said. “I could do it by hand, the customer would be happy and I would get paid.”

Along with two other men, Thomas would grade with a tractor he got from a friend before dumping asphalt from his truck into 3-ton (2.7 t) piles and hand shoveling it down. They would finish the job with a compactor and a small roller.

“I told them I didn't have much money saved and probably didn't have the best credit in the world, but they told me that they could still help me.”

That started a long and mutually beneficial association between Thomas and the equipment dealership.

Owning the paver allowed him to further grow his small business by taking on driveway and parking lot projects for commercial customers. He later traded up to a bigger Gehl paver that allowed him to do hillside jobs faster and better than before.

Several pieces later, he purchased a brand-new Mauldin 1750 paver that he paired with Ingersoll-Rand DD29 rollers on his first road projects.

“That made it possible for us to install longer roads and put down three to four inches of base with no problems,” Thomas said. “I could get my compaction with that Mauldin. As I kept growing, I was also able to purchase small motorgraders to do the bigger-sized projects that we were getting.”

His most recent purchases, all from Richmond Machinery, have included a Volvo PF4410, the big road paver that he uses with Volvo's various vibratory roller models.

Today, Thomas has 36 dump trucks and tractor trailers in his rolling stock, along with three pavers and around 25 other pieces of equipment. That has led Ty's Hauling & Paving to open a second yard to house its inventory.

This growth is pretty impressive for a company with such humble beginnings, but Thomas gives most of the credit to his expert staff.

“We have grown so much thanks to my employees — they have been very loyal to me, from my labor staff to my office staff,” Thomas said. “Everybody has just been doing their fair share in the business.”

One of the largest jobs Thomas' company worked on was the site work and paving for the Capital One West Creek campus in Richmond several years ago, which he said was about a $900,000 project.

“We are working with Henderson Construction to do this project,” Thomas said. “They are installing the sub-base and we are coming in and paving with two inches of asphalt through the woods. I would say it is the largest project we have ever worked on.”

Thomas is well known in the area for the level of professionalism and expertise that he instills in those who work for him. That means everyone has an assigned duty and there is little chit-chat or standing around. As a result, projects are often completed in half the time it takes Thomas' competitors.

In addition, bigger contractors have complimented Thomas' employees on consistently being on time and eager to work until the job is done.

“We work on getting the asphalt down precisely and making it look right,” he said. “Customers visiting the job site always tell us what a well-oiled machine the operation is.”

That has led to a lot of repeat business for Ty's Hauling & Paving.

Thomas has been described by co-workers and customers alike as “meticulous” and possessing of an expert eye that gives him the ability to just look at a raw piece of land and quickly ascertain in which direction rainwater is going to run or whether it will pond.

His attention to detail is also reflected in the fact that he insists on keeping his equipment and machines as clean as possible, something that his people work on every day.

“I just take great pride in what I have accomplished,” Thomas said. “I enjoy and love what I do and I believe I am good at it.”

He also is a firm believer in sharing his success with others.

For the last several years he has donated books and musical instruments to elementary schools on the Eastern Shore.

He also has given scholarships to deserving students at Northampton County High School. Recipients can use the money to attend college or go to a school to learn a high-demand trade.

“For those kids who want to get a degree in engineering or who may want to be a welder or mechanic, I want to be able to help them,” Thomas said. “We can always use people in those jobs, so I figured this was a good way to give back to the community.”