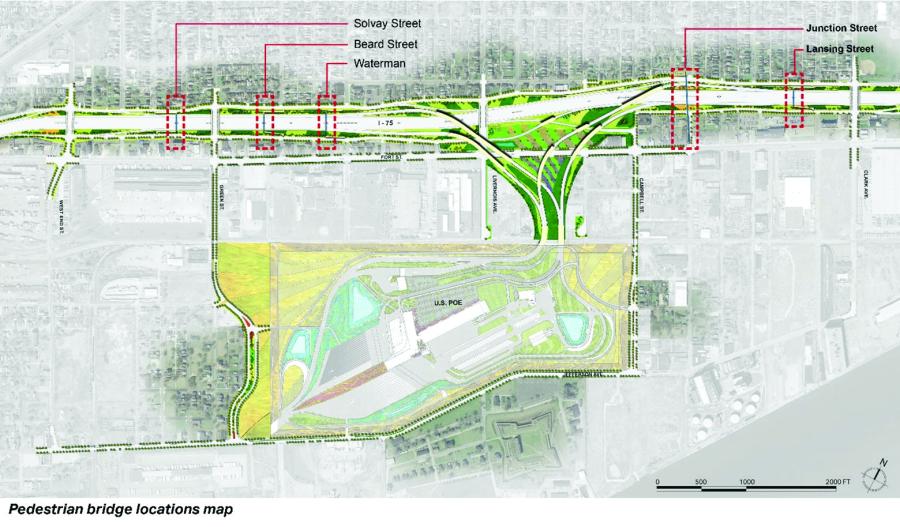 "This project is good for the Detroit community, our economy, and for the countless people who will use these new pedestrian bridges to get where they need to go," said Michigan Gov. Gretchen Whitmer. "When working on this project, it's crucial that we put Detroiters' well-being first, and that's exactly what we've done here today. I'm proud to take part in this announcement and am eager to continue working with these partners on the Gordie Howe International Bridge project."

The pedestrian bridge design is both functional and visually-pleasing. The design features a curved steel arch and will be constructed of pre-cast concrete. The bridges will include lighting features and will be compliant with Americans with Disabilities Act (ADA) standards.

"The design of the pedestrian bridges is a result of meaningful consultation with the community and other stakeholders," said Bryce Phillips, CEO, Windsor-Detroit Bridge Authority. "The voices of community members have helped shape the project since early planning days and we will continue to engage and consult as the project progresses through construction and into the operations phase."

The pedestrian bridges will be located over Interstate 75 (I-75) in Detroit at Solvay Street, Beard Street, Waterman Street, Junction Street and Lansing Street. Bridging North America will undertake construction of these pedestrian bridges between 2020 and 2024.

"The new pedestrian bridges will improve access to neighborhoods, businesses and service providers on both sides of I-75," said Aaron Epstein, CEO, Bridging North America. "We also see them serving as conduits for bicyclists and other recreation-seekers headed for the U.S. Port of Entry and, ultimately, the multi-use path on the bridge."

The Gordie Howe International Bridge project is expected to be in service by the end of 2024.

Windsor-Detroit Bridge Authority (WDBA) is a not-for-profit Canadian Crown corporation created to deliver the Gordie Howe International Bridge project between Windsor, Ontario, and Detroit, Mich., through a public-private partnership (P3). WDBA is responsible for overseeing and managing the construction and operation of the new crossing.