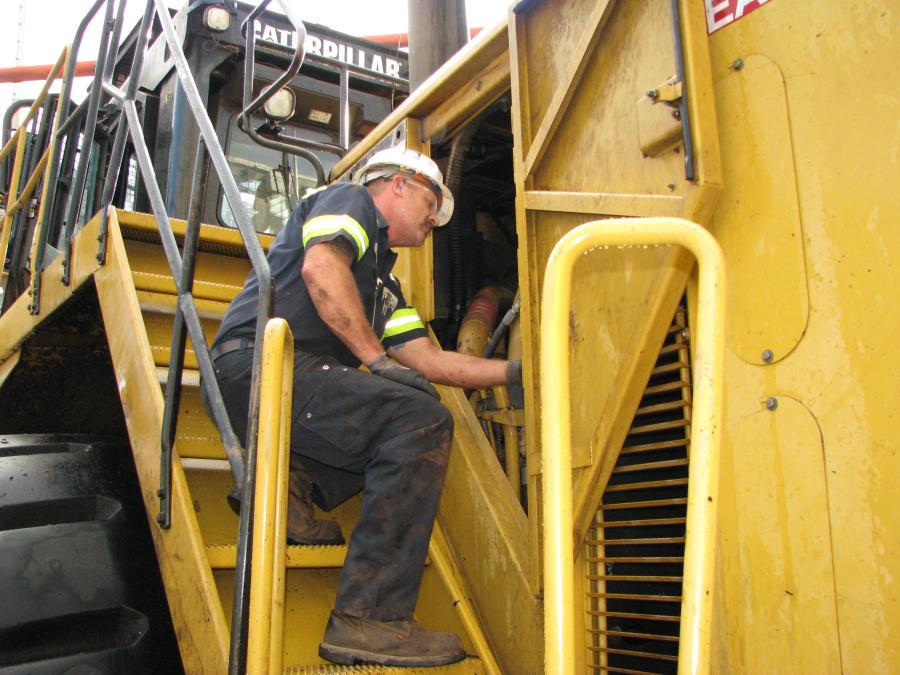 Willie Keen is responsible for everything with wheels as the mobile equipment owner and manager of International Paper in Oglethorpe, Ga. He has been with the company, which is one of the world's leading producers of fiber-based packaging, pulp and paper, for 38 years.

Recently, this machine saw a significant milestone — eclipsing 50,000 hours in service. This particular 990H model was the very first built specifically for the logging industry. It replaced a Cat 990 series, which was the first Cat machine used in a forestry application in 2000, when it was brought to this paper mill and converted from a bucket loader mining machine and transformed into a forestry machine.

International Paper's original 990 wheel loader proved to be the driving force for Caterpillar to begin building the 990H as a designated, factory-built forestry application machine. Caterpillar recognized the viability of building the machine based on what this customer had custom built.

When deciding on this new piece of machinery, International Paper considered a wide variety of options before purchasing the 990H wheel loader.

“Originally, we looked at Caterpillar to meet our individual needs,” said Keen. “We looked at a Cat 988 loader, but I wasn't sure if it would meet our needs. I had been from coast-to-coast, several times, looking at various machines. Noland and Jim came back and presented the heavier, more powerful 990H model to me. They said that although the 990H is more of an investment than the 988, they were not here to simply sell something that we didn't need. They were willing to walk away if need be.”

International Paper decided to invest in the Cat 990H wheel loader. They also traveled to Peoria, Ill., to watch the machine be built.

“We also saw the grapple being built in Kansas,” said Keen. “The grapple was built by Cat work tools. For the loader, the Cat Forestry Division took the original machine and transformed it into a designated logging machine through minor Cat modifications to the machine and installation of the grapple attachment. This is the largest grapple that Cat sets up on their loaders on the market for forestry machines.” 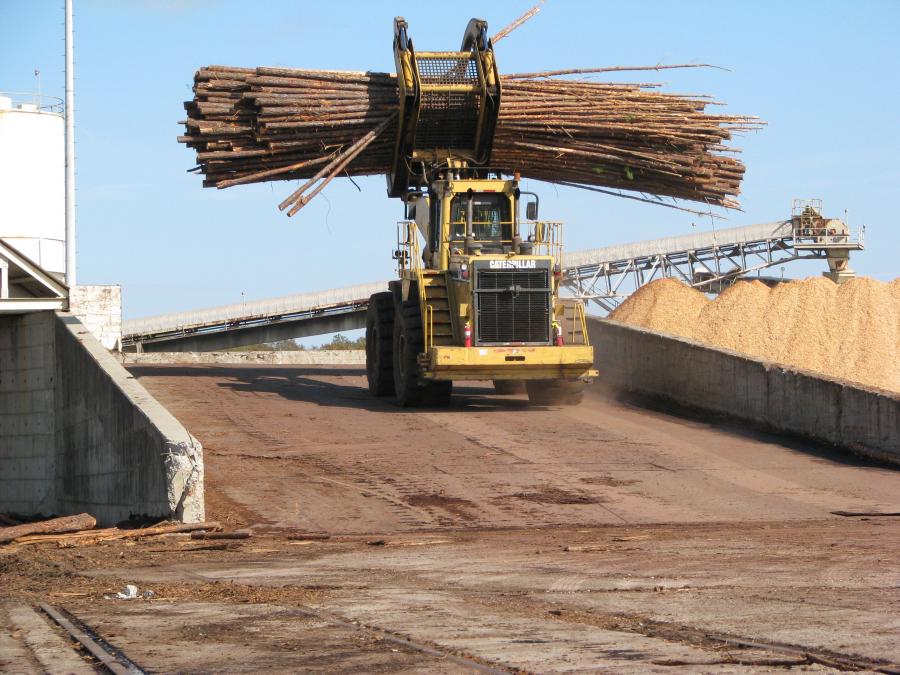 When dealing with 28-to-29-ton loads on average, you need productivity and power, according to Keen.

“Some loads are even heavier, and you need a machine that is able to handle whatever comes at it — at whatever weight.”

The company's Cat 990H is put to the test in a variety of situations, particularly when pulling out reserve stock, which is material that has been unloaded and stockpiled for future use at International Paper. The material may be wet, increasing the weight, sometimes to more than 30 tons. Power and lift also are essential because, in addition to lifting, the machine has to run up and down a loading ramp on a continuous basis, as well as maneuver a full load up and over a wall and into the plant's gentle feed. The max height needed for off-loading trucks is roughly 18 ft.

“Running from 8 p.m. until 8 a.m. and working from the reserve inventory at higher load weights, an underpowered machine isn't going to hold up like the big 990H,” he said.

Working With the Right Dealer

The substantial investment in the Cat 990H, which has lasted more than 10 years, was well worth the money, according to Keen. 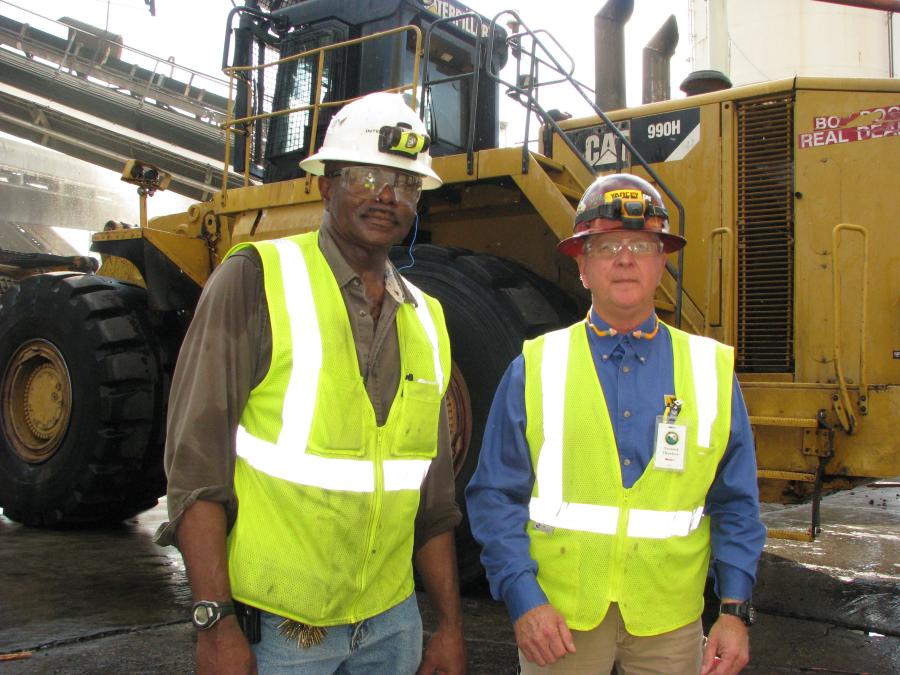 “I've been doing business with the Yancey Bros. Co. Albany, Ga., location since 1980,” he said. “We know these people well. If I have a problem at 2 o'clock in the morning, they've got a problem at 2 o'clock in the morning. I've had Yancey guys here around the clock if needed. This whole thing isn't about buying an expensive machine or a cheap machine, it's all about the service after the sale. That's what we get with Yancey. I never hear, we'll get with you Monday morning. We're 24/7, 365. We're not difficult, we just need someone who realizes when my machine is broken — someone needs to be on the way. I can make one call and someone's going to roll my way. We pay for service, but it's a small price to pay considering the impact this one machine has on the whole mill.”

Yancey Bros. Co. also helps handle maintenance of the machine for International Paper. The company has replaced both the engine and transmission of its 990H, which is done as a regular maintenance function of the loader as a preventative maintenance service. In fact, the company will soon be replacing the engine/transmission combo for a third time. Yancey will dyno test the new engine and rebuilt transmission before they deliver it to International Paper, and they will send out its technicians to help perform the work.

During the engine and transmission replacement, the pumps are swapped out, too. It's a total team effort between International Paper and Yancey Bros. Co. and takes about 10 days for replacement of everything. This replacement means virtually no down time before the next time to replace everything again.

“We run full out for 18,000 hours or so and then change the entire engine and power train,” he said.

Keen has found that it's cheaper to rebuild some of his machines than buy new ones.

“When we replace this machine, we'll keep it and operate it as a backup,” Keen said. “I'd like to replace this with a 990K; that would be my dream machine. I know what this machine can do and what it's capable of — it truly gets the job done.”

In the meantime, Keen said the company has upgraded its current wheel loader with a rear-mount backup camera, and installed a front mount camera at the fork level for viewing the forks and load. This camera even records, so the company can replay the footage.

Word of the reliability and productivity of the 990H has spread over the years, and International Paper has become a place where people travel to look at this logging machine. The H model even has a buddy seat in the cab for someone to see how it operates.

The original Cat 990 series 2 that started it all is still in operation at International Paper. Today, it has more 40,000 hours after serving as a backup machine for 17 years.