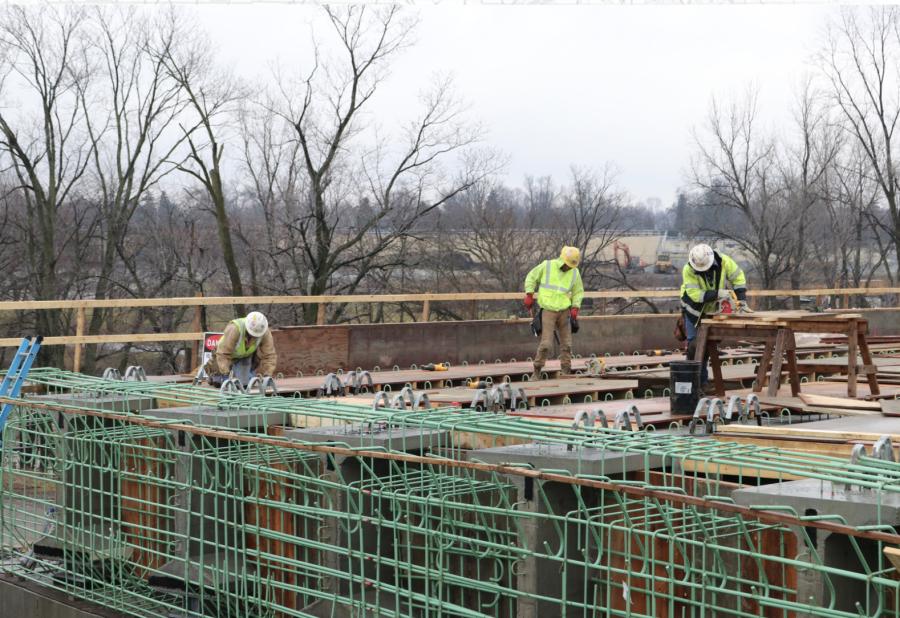 Work continues on the third and final phase of the Blanchard River bridge structure. (ODOT photo)

Extensive work on the Interstate 75 widening and reconstruction project in Findlay, Ohio, allowed the project to reach its first major milestones during 2018, and work continues as the project enters its third year of construction.

In 2018, the most notable changes in traffic patterns occurred off the mainline lanes of Interstate 75. In October, Lima Avenue closed to through traffic and pedestrians under U.S. 68/State Route 15 for approximately one year.

"The closure of Lima Avenue allows us to build the double roundabout on Lima Avenue, which is a crucial feature of the redesigned interchange at Interstate 75, U.S. 68/State Route 15 and Lima Avenue," said Kirk Slusher, ODOT District 1 deputy director. "It's an inconvenience now, but a safer and more practical interchange will come from it."

"The ramp carries traffic up and over the mainline lanes of the interstate to get to U.S. 68/State Route 15, which allows for safer and faster travel between the two highways," Slusher said.

Below are some facts that tell the progress of the project's second year.

Significant work also was completed on the reconfigured interchange at Interstate 75, U.S. 68/State Route 15 and Lima Avenue. Multiple bridge structures are currently under construction at the interchange to carry various ramps and mainline lanes over one another and over the railroad tracks in the area. Work will continue in the area of the interchange through late 2020, when the entire project is slated to be completed.

Slusher said significant work will occur over the winter when weather permits. Two lanes of traffic on Interstate 75 will continue to be maintained most of the time while construction continues. Some occasional nighttime closures will occur.

The entire reconstruction project is expected to be completed in late 2020. Beaver Excavating, Canton, serves as the general contractor on the project.