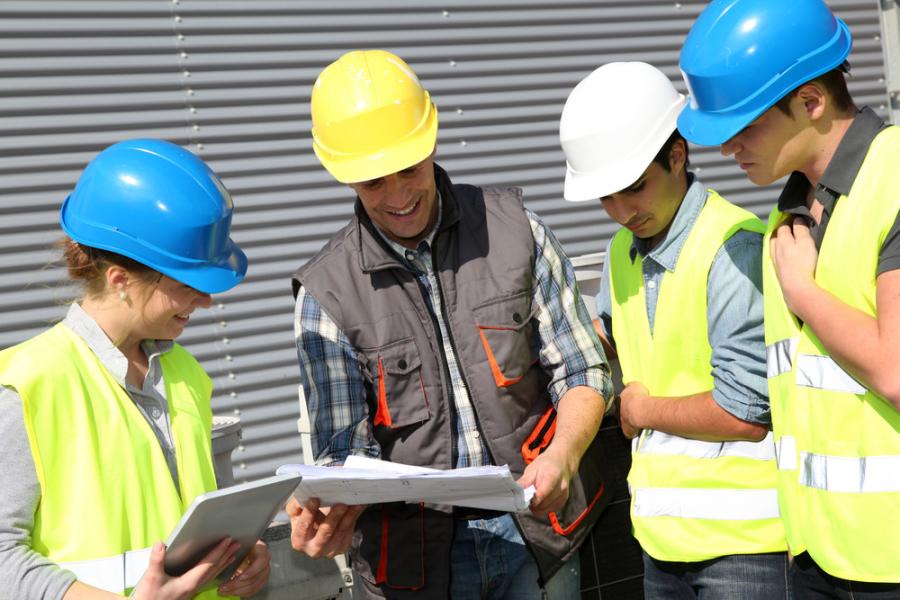 IOWA CITY, Iowa (AP) Home builders in the area are reaching into their own pockets to pay for area high school students to take a course on building a house. It's only partially an act of charity.

Faced with a shortage of construction workers across the state, the Iowa City area Home Builders Association is reviving what used to be an annual activity in Iowa City Community School District: building a house with students.

The association is partnering with Kirkwood Community College to offer a summer course where students help construct a house. HBA members also have committed to funding the cost for students in ICCSD who want to take the class and get the college credit.

As Tim Ruth of McCreedy Ruth Construction told the Iowa City Community School District board, contractors are going to need these students if they want to retire one day.

“This house will serve a great many needs, but the need it will probably satisfy more than any is the need for skilled labor,” he told the board recently. “We're in an extreme shortage because of the idea that a four-year degree is an advantage to someone.”

This shortage is felt by nearly all members of the area HBA, said Karyl Bohnsack, executive officer of the organization. She said contractors in the area struggle to find applicants, much less applicants with experience.

“My members are always looking for employees,” she told the Iowa City Press-Citizen . “It seems like there's constantly, every day, someone is posting on Facebook or Linked In that they are hiring.”

The students will shadow McCreedy Ruth Construction while building a group home with Reach for Your Potential, a nonprofit that provides homes for adults with disabilities. The 2,339-sq.-ft. house will have four rooms.

Bohnsack hopes it's the first of many for years to come. For Phil Hemingway, the ICCSD board member who pushed for the program, he sees it more like the program's 40th year. Eight years ago, a similar program run by the Home Builders Association was ended due to funding concerns, Hemingway said.

At the time, he said, it was considered a model program for home-building in high schools across the state. Home builders funded the project, the district paid the teachers to instruct the course, and the students provided the labor. After the house was built, it was sold, and the money was used to fund the next project.

“The fact that there's not been a student-built house in eight years where the students have had the hands-on experience,” Bohnsack said. “I think that's part of the reason there's such a workforce shortage, but it's happening nationwide.”

The reboot isn't what the previous program was — it's not happening during the school year, and it doesn't go toward a high school credit — but it's a start, Hemingway said.

Hemingway has pushed for more hands-on technical training since he joined the board. Prior to the home-building program, the board member pushed to get agricultural education courses taught in the school district.

In January, the ICCSD school board narrowly approved the plans to hire an educator to instruct the agricultural courses at the district's three comprehensive high schools for three years. It will cost the school district between $510,000 and $930,000 depending on whether an additional teacher is hired in the second and third year.

The class also would allow students in the district to participate in FFA, a student leadership organization that is centered on agriculture. As advocates of the plan explained, the class and participation in FFA would give students hands-on experience in agriculture at a time when the Iowa agricultural industry is desperately in need of agricultural workers.

The vote was a close one, with board members Janet Godwin, Paul Roesler and Ruthina Malone expressing concerns about whether there was enough student interest to warrant funding the program over others.

The revamped home-building program will not cost the school district.

Students will get two credit hours for putting in the required 128 hours of work between June 4 and Aug. 10, or roughly two eight-hour work days per week. With the class, students will get certification for a 10-hour Occupational Safety and Health Administration course required for most jobs in the industry.

Bohnsack said the students will get training on everything from framing and drywall to electrical and plumbing. Joe Greathouse, associate professor of construction management at Kirkwood Community College, will run the course. He told board members that the class can lead to job opportunities.

“The students will not only dedicate hours at the house, but the employers who are working with them will keep them on throughout the summer and eventually as part-time and full-time employment,” he said.

Bohnsack said she wants students to know the class can be the start of a career if they want it to be.

“For some kids, college is not for them, and they need to know that there are skilled jobs out there for them,” she said. “And they can learn those skills working with craftsmen in our community, and I think the high schools are pushing four-year colleges more than they are pushing two-year colleges or learning a trade.”