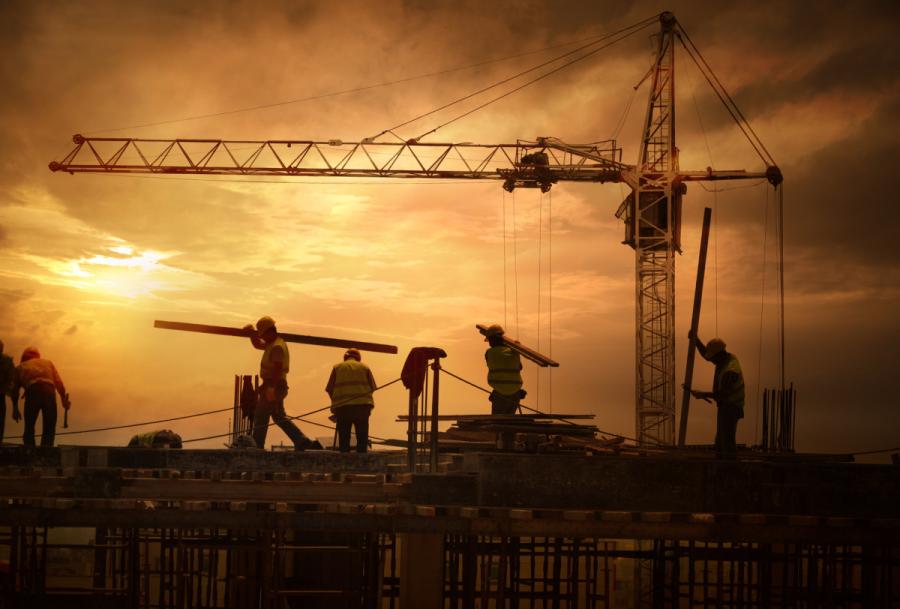 More than half of all Iowa jobs are for middle-skilled workers, but only one-third of Iowa workers are prepared to fill those positions, leaving a skills gap that spans multiple industries, according to a 2015 Iowa Workforce Development report.

Zachary Hageman moves through the almost-done luxury apartments near downtown Des Moines and points to the studs and wiring, the drywall and cabinets.

The 18-year-old is part of the cleanup crew, an entry-level position that's part of a new school program designed to give hands-on experience to high school students and recent graduates.

Once unsure of his future, the recent North High School graduate now plans to become an electrician. It's an in-demand job. In Iowa, experienced electricians average $30 an hour, or more than $62,000 a year, according to the Iowa Wage Report 2016.

“I know what I want to be doing,' Hageman told The Des Moines Register . In construction, at the end of the day, “you've done something that you can be proud of.'

As Iowa students head back to school, one of the hottest focuses is an effort to expand and elevate vocational and technical training in high school.

More than half of all Iowa jobs are for middle-skilled workers, but only one-third of Iowa workers are prepared to fill those positions, leaving a skills gap that spans multiple industries, according to a 2015 Iowa Workforce Development report.

Championed by Gov. Kim Reynolds, the state's Future Ready Iowa initiative set a goal to have 70 percent of Iowa's labor force earn training beyond high school by 2025. Currently, 58 percent of the state's workforce, defined as ages 25 to 64, meets that benchmark.

More K-12 schools and Iowa companies are partnering to add and expand skilled-trades programs; from creating the Skilled Trades Academy in Des Moines to a pre-apprenticeship program in Boone that can reduce the amount of time it takes a student to complete a traditional apprenticeship.

“The ability to earn a high-quality living with little debt — when you can give that hope to students and families, it inspires them to be engaged in their learning,' said Aiddy Phomvisay, director of Central Campus in Des Moines.

“We see help wanted signs out there all the time,' said Dan Knoup, executive officer of the Greater Des Moines Home Builders Association. “The jobs are out there. The careers are available.'

The school, which once housed the district's Technical High School, already had classes in welding, painting and drywall and homebuilding. It is adding HVAC and plumbing classes this school year, and it plans to add electrical the following school year.

“We have individual welding booths. We have state-of-the-art ventilation systems, all the capabilities that they have with an apprentice shop,' Phomvisay said.

That includes close access to a loading dock so students can work on heavy pieces of metal. In addition, specialized equipment will allow students to learn more advanced skills, such as powder coating and pipe welding.

The expansion is possible thanks to a partnership with more than 30 business and industry leaders, who will donate more than $1.5 million over three years to pay for equipment and additional teaching positions. The program will eventually grow from three to six teachers.

“It's critical for businesses to step up and help facilitate this,' said Gary Scrutchfield, owner of Lumbermans Drywall & Roofing Supply. “This is the future of our industry, and the future of the state. We need to participate and help (schools) move forward on this.'

Lumbermans is part of the Skilled Trades Alliance, an industry group that formed to raise donations and support and advise the program.

In addition, Des Moines schools spent more than $6 million renovating classrooms, creating space to grow its existing skilled-trades program from about 90 to 300 students in three years. Students from 26 nearby districts as well as Des Moines high schools may enroll in Central Campus classes.

“We want to be the best,' Phomvisay said. “We want to provide the very best to our students so they're inspired and get to work in a world-class facility, with world-class training and certificates that will make them far more competitive.'

As part of the Skilled Trades Academy, teens can earn certain safety and industry credentials while still in school, as well as apartment maintenance technician certification, helping some find work immediately after graduation.

For other students, the classroom training can lead directly to a trade apprenticeship program, and ultimately a high-paying job.

Across Iowa, for example, plumbers, pipe fitters and steamfitters can earn, on average, $31 an hour with experience, or more than $64,000 a year, according to a 2016 Iowa Wage Report. And there's often opportunity for overtime.

In central Iowa, after completing the five-year apprenticeship program with Plumbers and Steamfitters Local 33 and obtaining certain state licenses and certifications, a journey worker earns $33.65 an hour plus benefits.

The union's apprentice pay scale begins at $15.14 with regular increases after the first year.

“We're getting paid well,' said Trevor Campbell, an apprentice about to start his fourth year of training with Local 33.

Campbell said his career as a welder and steamfitter is opening financial doors. “By the time you're a journeyman, you've got all the qualifications you need to perform a job and make a really good, middle-class wage and live the American dream.'

To recruit teens into the trade, Local 33 partnered with Central Campus to allow students to work as helpers alongside journeymen. The students learn tool-handling, and math skills, such as adding and subtracting fractions, are reinforced.

“You're starting to learn the trade,' said Eric Smith, the union's training director. “It's about getting better-quality candidates. They come out with the foundation that they need.'

Such school-industry partnerships are becoming more common across Iowa.

In Boone, for example, Kruck Plumbing and Heating, a mechanical contractor, is partnering with Boone High School as part of a new pre-apprenticeship program.

“Our goal is to eliminate a year or two off their apprenticeship program,' Boone Principal Kris Byam said. “They (will) have an opportunity to cut down on the amount of time it takes them to become a journeyman plumber.'

Most registered apprenticeship programs offered by the Associated Builders and Contractors of Iowa take four years to complete, for example. Across industries and jobs, however, apprenticeships can range from one to six years depending on the complexity of work, according to the U.S. Department of Labor.

In Boone, students are introduced to a range of trades, including plumbing, HVAC, sheet metal and electrical work. They will complete hands-on training at a nearby apprentice shop.

“It's like a kid who changes his major four times when they're in college,' said Chad Houston, Kruck's president. “We want them to see all different kinds and let them see which path fits them best.'

A 2016 law that redesigns vocational school programs — now called career and technical programs — requires schools to partner with local business and industry leaders in an effort to better align school programs with the marketplace.

“If you're going to have a program in skilled trades or construction, you need to have a robust advisory committee and business people saying: 'Here are the skills we need,' said Jeremy Varner, the Iowa Department of Education's administrator of the Division of Community Colleges and Workforce Preparation.

The law also addresses the uneven access Iowa students have to programs by establishing regional partnerships between schools and community colleges. Such programs often require a heavy investment in equipment, or a certain number of students to make the program viable.

“It's hard for institutions to do it alone,' Varner said.

But it's not just the infrastructure and programming that pose a challenge. Many parents and teachers remain skeptical of so-called blue-collar work and encourage students to attend college instead.

In the last 30 years, the “status of vocational education plummeted,' said Marc Tucker, president of the National Center on Education and the Economy, a Washington, D.C., think tank.

“The message that went out was that vocational education was for kids who can't do academics, and that academics is crucially important because if you don't have academics you can't support a family,' he said.

Yet in countries such as Switzerland, vocational training has taken a different route, including higher academic expectations and lessons, he said.

“Parents will say, 'Use your brain. You don't want to work with your hands,' but in this industry you have to have both motor skills, and math is critical,' said Scrutchfield, owner of Lumbermans Drywall & Roofing Supply. “You have to be able to think.'

A key element is sharing what career advances are available, said Ginny Shindelar, vice president of education and training at the Associated Builders and Contractors of Iowa.

While students may start as apprentices, they can become a journeyman or master in their trade, or move into the management side and become an estimator, project manager or superintendent.

“There's a whole lot of options out there,' Shindelar said. “Sometimes, when you think of construction, you don't think of all the possibilities.'

Houston went the four-year route, graduating from Iowa State in 2004 before switching gears and starting an apprenticeship with Kruck, where he was working part time.

He worked his way up, earning his journeyman's and master's licenses in plumbing, HVAC and sheet metal. Today, he's the company's president.

“There's very high-paid, high-skilled jobs that require effort,' Scrutchfield said. “In the trades, when it's 20 below zero we work, when it's 100 degrees we work.'

Kort Kern thought about going directly into a trade after graduating from Des Moines Lincoln in 2012.

He'd spent his senior year taking a half-day welding class at Central Campus — a needed break “away from pushing papers' for other classes, he said.

But when it came time to decide a career route, he met resistance from his parents. Both had college degrees and envisioned the same for their son.

It would “never hurt' to finish college, they told him.

Kern graduated from the University of Iowa with a bachelor's degree in psychology but had trouble imagining himself at a desk job.

“I missed getting to work with my hands after being in school for four years,' Kern said.

Kern got in touch with his former welding teacher, who suggested an apprenticeship program.

The 23-year-old doesn't regret his college experience — he still might use it one day, he said — but his perspective has changed.

Kern now sees his future as a pipe fitter, a career that doesn't require a college degree but does require specialized training.

Kern was recently accepted into the five-year apprenticeship program with the Plumbers and Steamfitters Local Union 33. He now works at Excel Mechanical.

“I'd just say, there's nothing wrong with an honest day of hard work.'