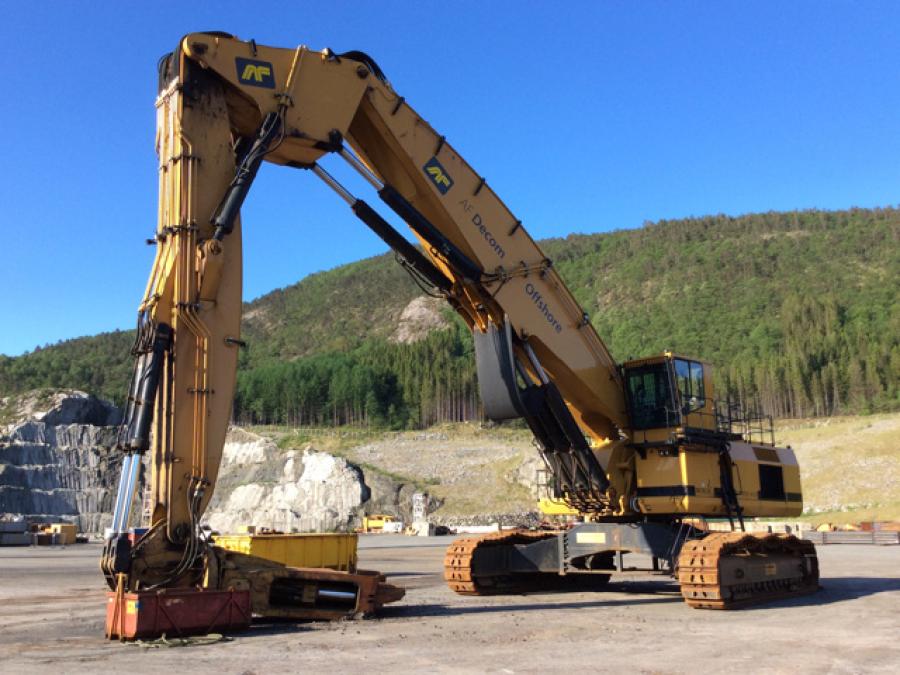 Buying used heavy equipment is no small task, especially when it comes to purchasing one of the world's most extreme demolition excavators. Last summer, a unique 2009 Rusch triple 34-25 long reach demolition track excavator was purchased from Norway by an Arizona-based buyer. It was purchased with confidence and ease through IronPlanet's used heavy equipment online marketplace.

This Rusch demolition excavator is like no other. The main body of the track excavator alone, without engine and panels, weighs 79.4 tons (72 t) — the equivalent weight of 144 cars. The main boom on this machine, which was designed and fabricated by Rusch Special Projects B.V., adds an additional 36.5 tons (33.1 t). The total machine weight of this behemoth is more than 330.7 tons (300 t), but the gross weight is only one of the machine's astonishing credentials.

When a machine of this caliber was advertised for sale in August 2016, it was unsurprising that the interest from buyers was high. Ultimately, it was progressive minded Arizona based demolition company BCS Enterprise Inc. that purchased the machine.

“We have found that the real contenders in the demolition market understand that large, complex demolition projects require equally large, highly-specialized and capable heavy machinery,” said Casey L. Johansen, director of BCS. “Having this type of machine means that projects can be completed in a cost-effective and timely fashion. By investing in the world's largest demolition excavator, it allows BCS to better serve its existing customers, attract new customers and reside in a niche market with fewer but more sophisticated competitors.”

Johansen added, “No other demolition track excavator across the globe, let alone America, has similar capabilities to this machine. The Rusch 34-25 will provide us with the ability to target large, industrial sites with greater safety and higher production.”

Due to the incredible size of the Rusch machine in both dimension and weight, it also required an extensive transportation plan. Once the machine was sold, it had to be dismantled and transferred from Norway to Arizona — a distance of more than 5,000 mi. (8,046.7 km). The machine was transported in multiple cargo ships and heavy transport trucks to its new home in Gilbert, Ariz.

“The prospect of buying a machine from somewhere thousands of miles away was initially daunting. Previous equipment purchases made by BCS were largely from local, land-based equipment auction firms in neighboring American states”, said Johansen.

Like many buyers across the globe, Johansen chose the online marketplace, IronPlanet, to purchase this extraordinary piece of used heavy equipment.

Commenting on the buying process as a whole, he said, “I wanted an online marketplace that I could trust, considering the item that I was planning on purchasing was incredibly large and being sold overseas. Buying with IronPlanet couldn't have been easier. Using their website, I was able to go through dozens of pictures and videos of the machine, and could also view detailed inspection reports.

“I was able to get a real insight into the machine's look, and more importantly — its capabilities. It was these factors which gave me the confidence to call IronPlanet and move the transaction forward. Without this access to a wealth of preliminary information, I may not have been inclined to pursue the purchase.”

Johansen also was surprised with the level of communication between himself and IronPlanet during the entire buying process.

“As someone who had never used a global online marketplace, I had anticipated that the whole process would be fairly complex,” said Johansen. “However, from the moment I expressed an interest in the demolition track excavator, a representative updated me on the progress of the transaction almost every day, keeping the lines of communication open between the seller and myself as the buyer. I felt that there was complete transparency regarding the entire transaction.”

IronPlanet is responsible for protecting both the buyer and the seller, ensuring that no party is left feeling vulnerable or at risk. When a large sum of money is changing hands, the buyer must feel secure in the legitimacy of the transaction.

“Had I been dealing directly with the seller, I doubt that I would have felt comfortable proceeding with this sizeable transaction and the transference of funds,” said Johansen. “The transaction could easily have been halted by a split in the business or the seller's business completely folding out after I had transferred the funds. With IronPlanet protecting us as a third party, I felt confident that the interest of BCS was secure.”

The purchasing of the machine was only half of the story. The transportation of such large, heavy machinery was treated with the same meticulous attention to detail.

According to Johansen, “The movement of the machine from the ground to the port took 12 truckloads. The main body of the machine was transported in one single load that weighed 79 tons and was more than 16 feet tall on the trailer”.

Following the machine's overseas transportation to its final destination in the heart of Arizona, Johansen is excited to get the machine in operation and show his investment off to the rest of the world. But what will the machine's first project be?

“This world-leading machine will firstly be responsible for taking down a concrete and steel football stadium for Arizona State University in Tempe Ariz.,” he said. “While this demolition project doesn't require a machine with quite as much power as the Rusch 34-25, it will provide a great, public platform for BCS to test the capabilities of its extreme demolition excavator, before using it on larger and more complex projects.”—CEG