A day in the grueling life of a New York City Bridge Welder. 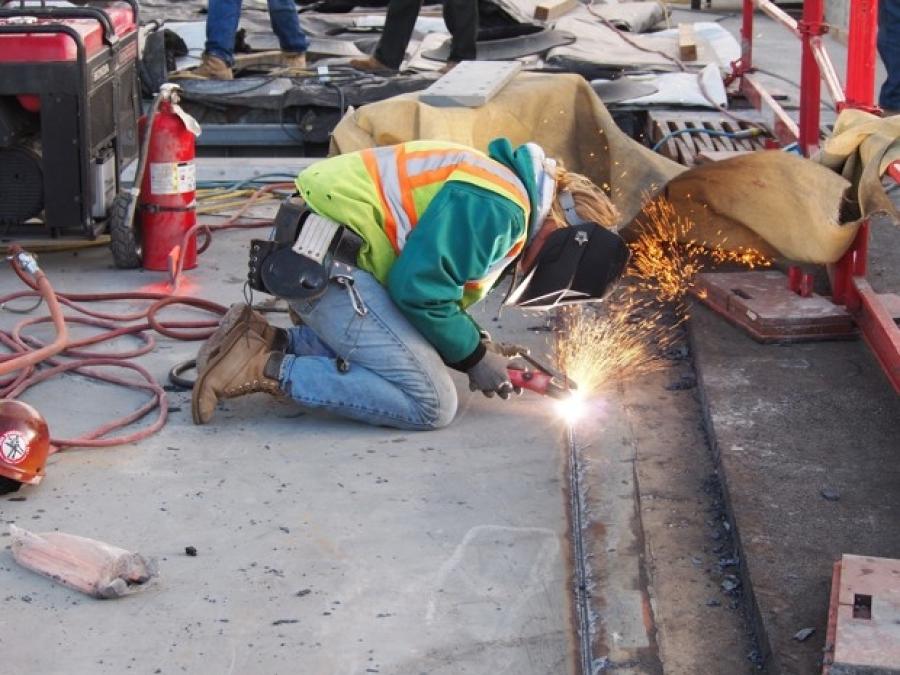 Image courtesy of Kim Moloney. Moloney says the most shocking sensory experience on the Verrazano was learning how truly loud it is.

Note: This article originally appeared on the website www.citylab.com:

The Verrazano Bridge has always been Kim Moloney's favorite bridge. She used to sit underneath it and eat her breakfast in the morning. So last June, when she was asked to come work on a three-year project to replace the steel on the top deck of North America's largest suspension bridge, she couldn't say no. “It was kind of a beautiful, romantic thing,” says Moloney of the big renovation project. She took her spud wrench, helldog, and power jack and climbed on up.

Moloney, who is 29, is working as a journeyman and is one of the few female welders (out of a crew of about 100) on the bridge project. She grew up in New Jersey and—thanks to an interest in sculpture—took welding classes in Manhattan's Chinatown before holding down various gigs as a tattoo artist, freelance illustrator, and café manager. Then she headed to trade school for welding. There, at Apex Tech in Long Island City, she head about the union, Brooklyn's Ironworkers Local 361. There was a test coming up, and she went for it.

Right now, her workdays are ten hours long. It's a lot of lifting and grinding. “It makes me feel strong and capable,” she says.

It's not unusual for women to be few and far between on work crews. According to a 2014 report from the National Women's Law Center, women make up only 2.6 percent of construction workers in America. (The report estimated that there were more than 7,600,000 male construction workers in the United States, and just 206,000 women.) The United States Department of Labor stepped up and offered millions in funding and grants that make up apprenticeship programs to expand opportunities for women and minorities. There's a union devoted just to women iron workers in the U.S. and Canada. In some cities, such as Detroit, there are new non-profits aimed at teaching the trade to women.

In Moloney's experience, being one of the few women on a project can present some challenges. Moloney's still trying to put her finger on it. "I feel like in certain ways I get more opportunities, but in other ways, not so much," she says. She says that male co-workers sometimes offer to help her carry things that she can handle on her own, or try to take tools out of her hands. "I get really protective over my tools," she says. She's noticed that struggling men on the bridge won't be offered the same help.

But she also finds that the guys are more inclined to teach her things. When she's learning to use new tools, she says, she gets a clearer explanation than some male apprentices might.

Though Moloney can't speak for everyone, she says that in her case, her gender might affect workplace social dynamics. Moloney says that some of guys on the job don't talk to her or say hi at right away; she thinks they're skeptical of her because of the history of women filing lawsuits against guys for sexual harassment. (A study submitted to the Occupational Healthy and Safety Administration found that 88 percent of female construction workers had reported sexual harassment on the job.) "It's definitely a boys club. It's the way the union is. It's predominantly white males," she says.

Moloney says the most shocking sensory experience on the Verrazano was learning how truly loud it is. She wears earplugs all the time. But what trumps its loudness is the beauty the bridge reveals. As she walks across the 13,700 feet of the Verrazano, she sees massive cargo ships, cruise ships, and military ships all passing through the narrows. Above her, she sees the weather change. “Being on the job, we see the sunrise—and when we work overtime, we see it set,” says Moloney. Workers can see Manhattan, Brooklyn, Staten Island, and the Wonder Wheel on Coney Island. “Being up so high, it's like being able to see from a skyscraper,” she says.

Sometimes, the crew is so focused on their work that they forget that they're even on a bridge. But the intense focus is necessary. Some days are wetter than others, and workers can slip and fall. On windy days, it can be hard to stand up straight. One day, Moloney was caught off guard. “I dropped this pipe in the water and then I looked down and I watched it until it splashed,” she says. “It took another minute to get myself together. And then it became all very real.”

Moloney says her work on the bridge can be a lot like driving. "You're always, like, this close. If you just went like that, you could be in a head-on collision with whoever. You don't want to get yourself stuck between something, because even in a second you could take your arm off or your finger or something could land on your foot." They are working with tons and tons of weight, she says. Errors are prevented by having a team on the bridge that looks out for one another.

Fortunately, Moloney hasn't witnessed any accidents as her time as an ironworker—though she's heard her share of horror stories. "You kind of just have to block it out,” she says. At first, it's natural to be nervous walking over a beam. “The next time, you don't even notice it.”