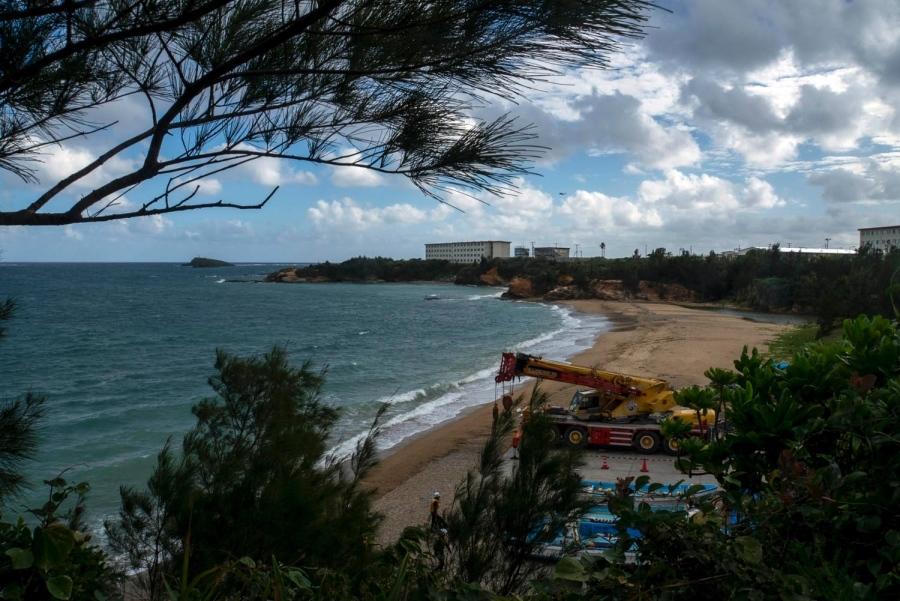 Concrete blocks are being dropped into the waters off Camp Schwab, the first major step in building a runway that will facilitate the controversial relocation of Marine forces within Okinawa.

The Okinawa Defense Bureau is placing the 228 blocks — each weighing between 11 and 14 tons — at the bottom of Oura Bay at Henoko so a protective film can be installed to prevent ocean contamination during landfill work, a bureau spokesman said.

Okinawa Gov. Takeshi Onaga, who returned Sunday from a trip to Washington to lobby the Trump administration against relocating Marine Corps Air Station Futenma to the island's remote north, immediately called for suspension of the work.

The relocation plan was first drawn up in the mid-1990s in response to a surge of anti-American sentiment associated with the brutal rape of a 12-year-old girl by three U.S. servicemembers. Residents surrounding Futenma, which lies in a densely populated area in central Okinawa, also expressed safety concerns about aircraft constantly flying overhead.

Japanese and American lawmakers agreed to move Marine air operations, but ultimately decided to keep them on the island. That decision sparked protests that continue today.

Onaga, who was elected on an anti-base platform in 2014, has vowed to halt the relocation to the northern recesses of Nago and expel the Marines' controversial tilt-rotor MV-22 Osprey. While their movement is small, Onaga and the protesters have popular support.

Onaga revoked the permit to fill in the sea for the runway in 2015, and the Japanese government temporarily suspended construction last March.

Work at the site began anew on Dec. 27, after Onaga's permit revocation was struck down by the Fukuoka High Court with backing from Japan's Supreme Court.

Onaga has since vowed further resistance. A permit signed by his predecessor to break seabed rocks is set to expire at the end of March, and Japan's defense ministry is reviewing whether a renewal will be needed. Onaga has said he will not sign it if it reaches his desk.

Tokyo could say a renewal is not needed because of a deal struck in January with the Nago Fishermen's Association, which bequeathed rights to the area in exchange for financial compensation.

See the original story on the Stars and Stripes website at http://url.ie/11oe5.