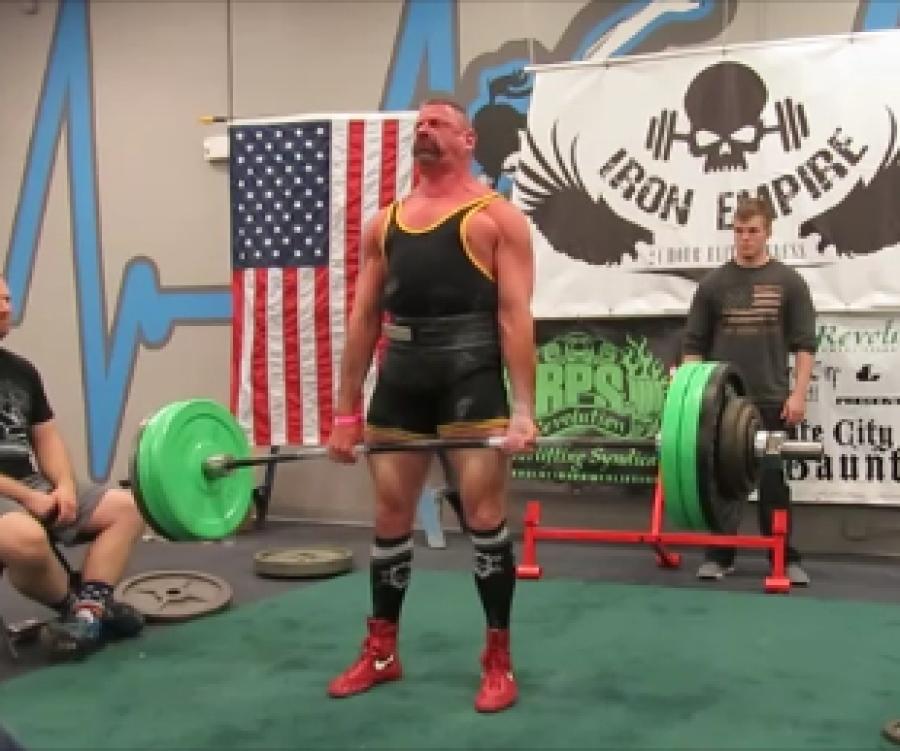 One of Hiltz’s passions is power lifting. He recently broke his own RPS world record — masters division — with a 620 lb. deadlift.

According to Hiltz, the industry was a part of his life from the beginning. He was a 5-year-old kid holding his lunchbox just waiting for his dad to take him to work in the pickup. He stayed with his family's corporation two years after his father's passing then started his own company in 1996.

“I went off on my own and kept what little stock I had in the family company, and we started with nothing … a wing and a prayer, and a small amount of savings,” he said. “We sent our incorporation papers into the state, and you have no leverage or any influence as to when they actually incorporate you. They did the actual incorporation on my father's birthday, so we were incorporated on Dec. 16, 1996.”

At that time, Hiltz was able to get a contract building retaining walls for a local church where he demoed three excavators to do the job.

“I told each supplier that at the completion of the job I would choose one and buy it,” he noted. “We finished the project in a week, and I was able to make enough profit to put a down payment on an excavator, which was our first piece of equipment.”

The company had two employees at the very beginning. That number has multiplied to 50 over the years.

“We'd grow as a good person would come to me and ask for a job. I would hire them without question and figure out how to keep them busy afterwards,” Hiltz said. “So this company is built around some pretty magnificent people. It's grown because of it.”

Karen Nichols has been with Hiltz since 1988. She started with the family business and moved with Hiltz when he incorporated. She serves as the office administrator.

Employees also include three sets of fathers and sons, one father and daughter and one family with five members who are all on the payroll.

“There are five Lyfords that work here,” Hiltz said. “Their father was in the excavation business, and it's just transcended. We've built this company around the sense of family. I worry about every one of them like they're my own and they reciprocate in like manner. It's pretty unique.”

Hiltz's family includes his wife, Tania; daughter, Chelsea, who is married and works as a registered nurse; and son, Colby, who is 15 and shows some interest in the industry.

The company covers all of New Hampshire from border to border and specializes in all facets of commercial excavation. Large earthmoving jobs are a favorite.

“It's a challenge to strategize as to how much dirt you can move in a day,” Hiltz explained. “We've become very proficient at it.”

The company fleet includes around 125 pieces of trucks and iron. As part of its fleet procurement strategy, the fleet is diverse, keeping everyone competitive. Numerous Caterpillar and Link-Belt pieces are included, and trucks are nearly all Mack.

According to Hiltz, the company does public and private competitive bids, and once they are able to get their foot in the door with a client, they focus on giving them the same service they give all the other clients.

“This leads to repeat business, so we don't typically have to look real hard for invitations to bid, because our customer base has built itself to where we're pretty busy just trying to ervice them,” he said. “We've had a commitment to satisfying our customers from the beginning, and worked many long hours seven days a week for quite some time.”

Hiltz's second job after incorporating was at New Hampshire College and involved a commercial building.

“That was my first real job, and that job value was around $70,000,” he said. “We're now doing a multi-million-dollar contract for Southern New Hampshire University, which is the same college; they just changed their name. We've been working at that campus for 20 years.”

Downturns in the economy offered an opportunity for the company to grow, since equipment prices were better and real estate opportunities were more predominant. Hiltz noted that they were in a financial situation where they had worked and saved over the years to be able to capitalize and grow.

“We have a very diverse management staff and the talent level here is such that we can look for any project — whether it be road, civil site, or heavy highway — and go after it,” he said. “So we're able to keep enough backlog to weather a storm.”

In regard to competition, Hiltz noted that they try to “provide a better service and be easier to work with,” focusing on doing the best they can.

Notable jobs over the years have included the Northbound Rest Area on I-93; a 20-acre athletic complex presently under way at the Southern New Hampshire University; and a very large development for the John J. Flatley Company that included more than $9 million in site work which was completed in 11 months.

The company is heavily involved with the community, such as donating to schools and assisting with machines when the Parks and Rec Department needs something.

As to the future of the company, Hiltz is looking forward to continuing to grow. In fact, he reported that he is contemplating the possibility of the company becoming employee-owned so its longevity can perpetuate for years and years beyond his retirement.

Looking to the future of the industry itself, Hiltz noted that he sees technology picking up some of the slack from lack of interest from the millennials.

“The younger folks don't seem to be coming into our industry; it's something that we need to focus on and start pushing in the schools” he said. “We need to make kids more aware of what a wonderful career it can be in this industry. Everyone has the same problem and nobody seems to have an easy solution. We go to trade shows and we try to put our name out there. We advertise on Facebook, but the dynamic of the folks that come is not of the 'I want to be hard working' type. Our company's average age is 55. I don't have the answer; I think it is just awareness. As an industry, we have to make young folks aware that hard work is not a sin — it's a good lifestyle.”