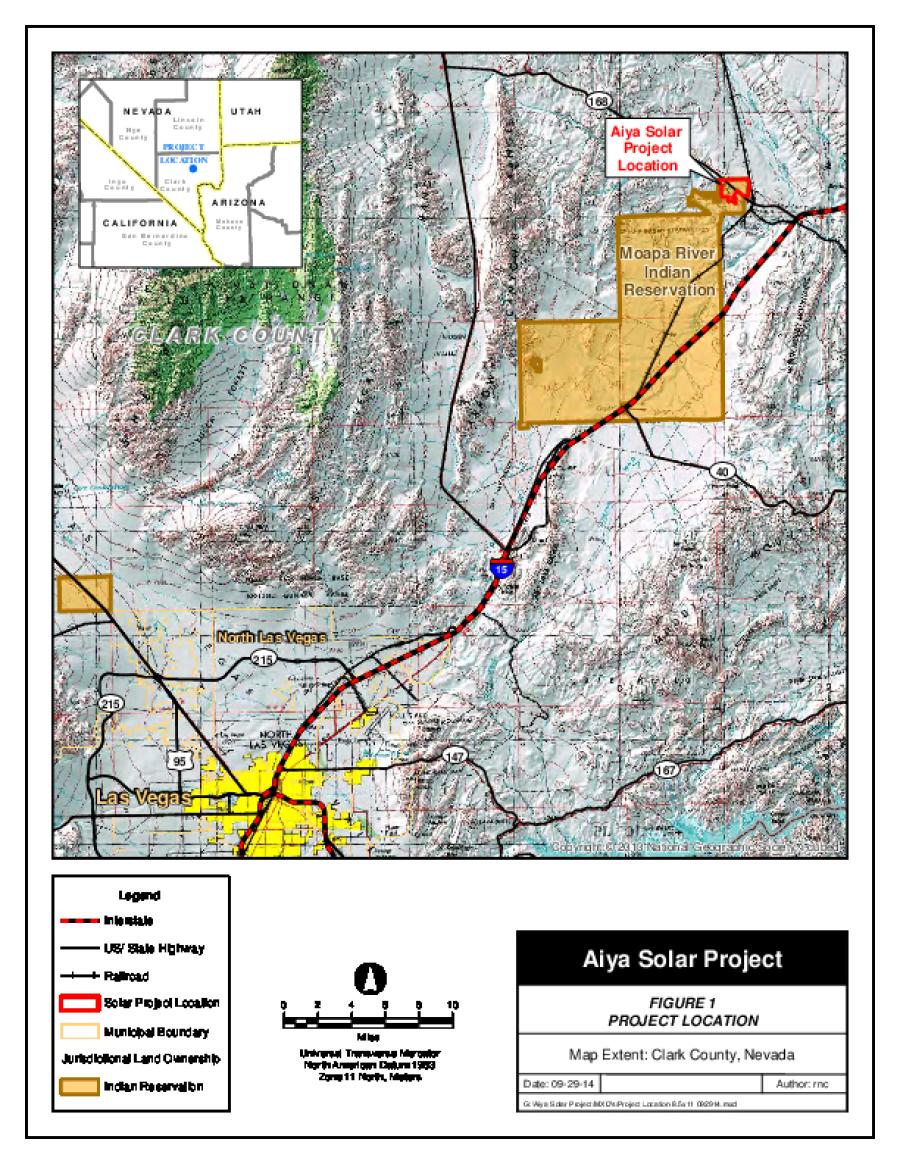 U.S. Secretary of the Interior Sally Jewell joined leaders of the Moapa Band of Paiute Indians and First Solar to announce approval of the 100-megawatt Aiya Solar Project on tribal trust land in Clark County, Nevada.

Located about 40 mi. (64 km) northeast of Las Vegas, Nev., the Aiya Solar Project is the third utility-scale photovoltaic facility approved for development on the Moapa Band of Paiute Indians Reservation. The project is the 60th renewable energy project approved for federally administered land since 2009 as part of a Department-wide effort to advance smart development of renewable energy on our nation's public lands.

“As our nation's renewable energy portfolio continues to grow, it is important that tribal communities have every opportunity to harness the energy of the sun and wind in a way that can power homes, businesses and economies,” said Secretary Jewell. “This is a great day for the Moapa Band of Paiute Indians and for Indian Country, and an important step in our efforts to foster tribal energy self-sufficiency and economic self-determination.”

Secretary Jewell, who serves as Chair of the White House Council on Native American Affairs, announced the solar project approval following a tour of First Solar's previously approved Moapa Southern Paiute Solar project site. The Aiya Solar Project is proposed by Aiya Solar Project LLC, a subsidiary of First Solar Inc., and was developed by First Solar in partnership with the Moapa Band of Paiute Indians. The Record of Decision (ROD) for Aiya approves the construction, operation and maintenance of a low-impact photovoltaic plant and associated infrastructure on about 900 acres of tribal land on the Moapa Band of Paiute Indians Reservation.

“Beyond these immediate benefits, these solar projects will provide long-term economic benefits that will allow the Tribe to diversify, to grow and to achieve its goals while remaining true to our culture and heritage,” said Tribal Chairman Robert Tom. “The Aiya project is a key step in achieving our goals.”

The facility is expected to generate enough electricity to power about 25,000 homes and create about 300 construction jobs on the reservation, according to First Solar. The company and the tribe have proposed operation of the facility for at least 30 years, with two options to renew the lease for an additional 10 years each. The project will help provide a long-term, diverse and viable economic revenue base and job opportunities for the Moapa Band of Paiute Indians, while assisting Nevada and neighboring states in meeting their renewable energy needs.

“With these solar projects, the Moapa Band has shown what can be accomplished when we work in partnership with tribes,” said Larry Roberts. “These projects demonstrate Moapa Band's leadership in growing its tribal economy while producing a valuable renewable energy resource that can be enjoyed by the broader community.”

Associated infrastructure for the project would include an electric line to connect the project to the existing transmission grid, a water pipeline, an operations and maintenance building, and other related facilities. In evaluating the proposed project's compliance with the National Environmental Policy Act, the Bureau of Indian Affairs worked closely with the Moapa Band of Paiute Indians and cooperating agencies, including the Bureau of Land Management, U.S. Fish and Wildlife Service, U.S. Environmental Protection Agency and U.S. Army Corps of Engineers.

The Aiya project is one of four solar power facilities planned by First Solar and Tribes in the area. In 2012, Interior approved the 250-megawatt Moapa Southern Paiute Solar photovoltaic facility — enough to power 100,000 homes — serving customers of Los Angeles Department of Water and Power under a 25 year Power Purchase Agreement. This first-ever utility-scale solar project on American Indian trust lands is currently under construction and nearing completion. First Solar also is working with the Las Vegas Paiute Tribe on another 100-megawatt facility at its Snow Mountain Reservation, and with the Fort Mojave Tribe on a 300 MW project at its Fort Mojave Reservation.

Prior to 2009, there were no solar energy projects permitted on federally administered land. Together, the 36 solar, 11 wind and 13 geothermal facilities and associated transmission infrastructure approved by this Administration could support more than 26,000 jobs and generate nearly 15,500 megawatts of electricity to communities across the country — enough to power nearly 5 million homes.

The approved projects, 13 of which are already producing power, represent $40 billion in potential capital investments by industry in clean energy development. These initiatives will help meet President Obama's Climate Action Plan goal of 20,000 megawatts of power permitted for renewable energy projects on public lands by 2020.

Under the Obama Administration's initiatives to foster tribal energy self-sufficiency and advance economic competitiveness, Interior also conducted a sweeping reform of federal surface leasing regulations for American Indian lands that streamlines the approval process for home ownership and spurs renewable energy development in Indian Country. As trustee for the land and resources of federally-recognized tribes, Interior is responsible for managing about 55 million surface acres in Indian Country.