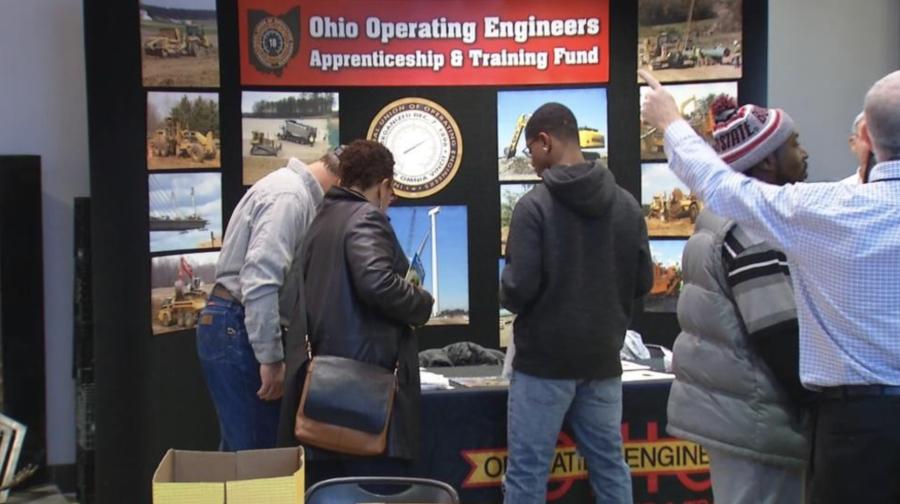 Attendants discuss the possibilities and potential for work with heavy equipment. (WSYX/WTTE)

There's a growing shortage of skilled workers in central Ohio. Now, there's a push to get younger people into the construction industry.

At 14, Tawfeeq Sirag already knows construction is what he wants to do for a living. Professional bricklayers are showing him the ropes.

"It was hard, especially the brick part that was hard."

With so many career options for young people, this high school freshman says a job where he can work with his hands isn't a hard choice.

The teens enthusiasm is what job seekers are looking for at the Construction Trades Career Fair. It's targeting high school students and young adults interested in construction.

"One of the challenges and the biggest challenge that they face is trying to recruit younger folks,” said Patrick Reardon with the Ohio State Apprenticeship Council.

According to a survey by the Associated General Contractors of America, in Ohio 65 percent of contractors report it will become harder to find and hire qualified construction professionals over the coming year.

"A lot of the younger generation are really interested in IT work and things of that nature and it's just a challenge for them to get people in the pipeline to replace some of their aging workforce."

Some young people are thinking about career options in a trade. For more than ten years, Shawnte Mitchell has been working in one as an electrician. He's still young and looking for a job that's not temporary

"It's been tremendously tough for me and my family and it's something that keeps me out coming to events like this and reapplying and finding my niche and my spot,” said Mitchell.

Thursday's career fair was the first one ever held. For more information on available jobs and apprenticeship, people can go to Ohio Means Jobs apprentices or Jobseeker pagees.