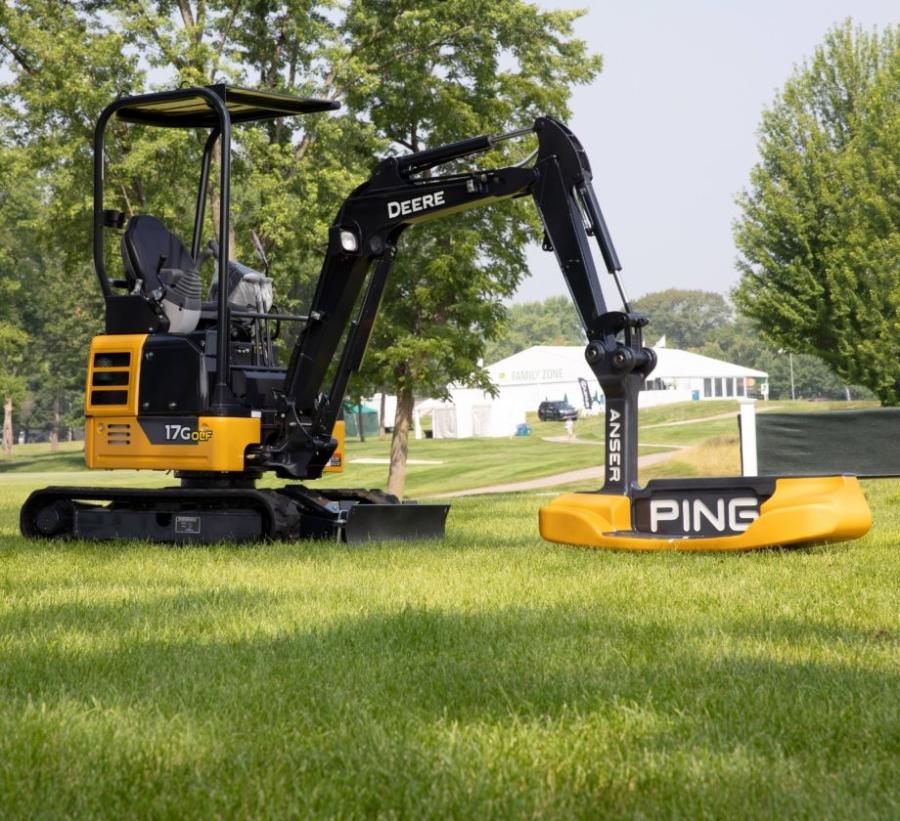 Just as golf fans are sure to geek out at the sight of John Deere’s invention, employees who worked on the machine were just as excited about this crossover between heavy machinery and sports.

Golf fans in attendance of the PGA's annual John Deere Classic have lately grown accustomed to seeing some of the sport's most unique and user-friendly displays situated between the tee boxes and rolling greens of TPC Deere Run in Silvis, Ill. With John Deere's headquarters located just miles down the road from the course in nearby Moline, Ill., the agriculture and construction equipment manufacturer has fully capitalized on its advantageous demographic positioning by bringing along some of its most ambitious and imaginative creations for all to see.

"We were awarded the Best Title Sponsor Integration award from the PGA last year, in large part because of the non-traditional equipment displays that were introduced throughout the course," said Jason Cherry, manager of Brand Communications and Corporate Identity. "The displays are intended to surprise and delight attendees and give them something a little unexpected, something more than golf. It highlights our equipment and brand in a different way."

Awards bring not only recognition, but also increased expectations. So how could John Deere possibly follow up on the most talked about item from last year's tournament – a 470G excavator with an oversized driver head affixed to the arm – while still keeping returning fans amused? Easy, they made their exhibit interactive this time around!

Cherry said that 2018's marquee display was conceived with the idea that it would be fully functional, however that ultimately proved not feasible in the end. Out of that experience came the thought to turn a mini-excavator into a putter that fans could actually operate to try to sink a large ball into a makeshift cup. So John Deere partnered with Ping Golf and flew out to the company's Phoenix, Ariz., headquarters to begin the design process. Using computer aided drifting (CAD) technology, Ping's engineers first designed the putter to be the traditional size of its famous Anser model and John Deere later enlarged it to fit its mini-excavator.

"There are certain things about the Anser putter, some of the details, that have to be on this putter, that's what makes it an Anser putter," said Tony Serrano, senior design engineer at PING. "It's important to PING that we keep those details in the design, but also get some of the details from a John Deere excavator (the 17G) that make it a John Deere excavator. It's the important details that make those products what they are."

In addition to John Deere's construction equipment trade dress (yellow and charcoal), the putter includes the "brick" pattern from the front grille of John Deere articulated dump trucks (ADTs). Made of aluminum, the XL putter weighs 325 lbs. and is 61.5 inches heel to toe. Bridgestone was responsible for developing a ball big enough for the machine to putt.

"The engineering geometry was done in-house," Cherry said. "The forms for the putter and golf ball were produced in our Waterloo facility then cast in aluminum at a foundry in Wisconsin. It was important for us to highlight our engineering and manufacturing capabilities … even though super-sized mini-golf isn't exactly a core competency."

Just as golf fans are sure to geek out at the sight of John Deere's invention, employees who worked on the machine were just as excited about this crossover between heavy machinery and sports.

"The project with PING came out of left field for me, and I think it's going to come out of left field for a lot of people, and that's exciting because in working together we found our companies have so much in common," said Troy Maddox, a senior design engineer at John Deere. "The things that we care about — working with customers, the precise engineering of our products, and the constraints we have to operate under — have pushed us each to perfect something special for our customers."