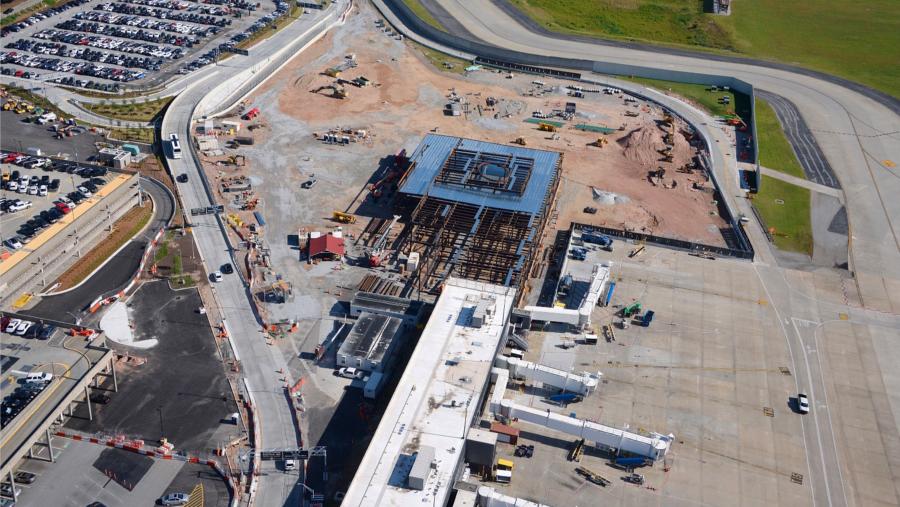 The Hartsfield-Jackson Atlanta International Airport (ATL), which handles one of the largest passenger volumes of any airport globally, is undergoing a more than $259 million upgrade to bring in new gates and other key structures to handle the increasing demands on an airport.

A joint venture (JV) consisting of Skanska, along with New South Construction, FS360 and Synergy Construction, was awarded the contract on Oct. 27, 2017.

The ATL's Concourse T-North Extension project features the addition of five new gates and a swing gate at the north end of Concourse T. Swing gates reduce the need for staff to open and close the gate and are becoming more common at airport terminals. 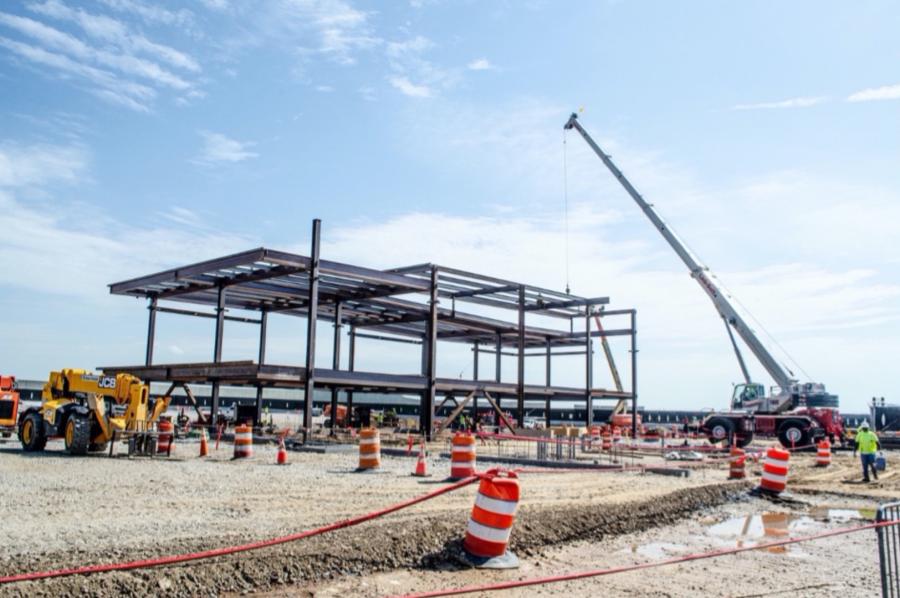 Additional construction includes: rebuilding a major portion of the North Terminal exit road, constructing a Delta Air Lines ground support equipment facility, demolishing one of the airport fire stations and rebuilding it in a new location, rebuilding a station for transformers and the main Georgia Power feed that supplies electricity to the airport, laying a new fiber network to support the entire airport's communications and internet, and overseeing relocations of some of the utilities infrastructure.

The work began in early January 2021 and should be substantially complete in spring 2023.

"The new gates in Concourse T are the first additions at ATL in nearly 10 years since the international terminal in Concourse F was completed in 2012," said Matt Frey, Skanska's vice president and account manager. "Long before considering jet bridges, interior modifications and new gate arrangements, the team completed groundwork to prepare for the expansion."

Some of the enabling components of this project included rerouting a major portion of the North Terminal exit road; conducting significant civil engineering work that included using laser scanning equipment to identify buried utility infrastructure; much of which remained in place from its initial installation 50 years ago and was not well mapped; recording locations of lines to facilitate safe digging for this and any future projects; creating access manholes for maintenance; and repositioning infrastructure away from planned construction areas if necessary.

The project at the world's busiest passenger airport, according to the Airports Council International, is part of a broader expansion and renovation plan, ATLNext, which aims to increase capacity, renew and replace existing facilities and enhance the airport's aesthetic appeal.

"We are proud to support the effort to help secure Hartsfield-Jackson's position as the busiest and most efficient airport in the world," said Scott Cannon, executive vice president and general manager of Skanska's building operations in Georgia and South Carolina. "The Concourse T-North Extension and renovation effort will enhance the level of customer service, while meeting passengers' changing needs."

One key element is that the new gate expansion design must facilitate passenger convenience within the airport while also considering optimal airplane maneuverability requirements to preserve wingtip safety zones outside as aircraft push in and out of the gates and navigate the taxiways.

"Typically, construction managers aim to have building supplies delivered just in time for their use to minimize the need for storage and reduce the risk of damage during intermediate moves," said Frey.

"For this project, materials are being acquired as soon as they are available and stored locally to ensure that delayed procurement does not affect tight project timelines that aim to complete this expansion of Concourse T by the spring of 2023.

Scheduling and coordination are also crucial to ensure work is maximized. Space for materials and equipment storage for the JV has not been a huge hurdle like it may have been at other aviation construction projects.

"The airport provided us with a massive parking area where we were able to stage materials, equipment, vehicles, our offices and more," he added. "From constructing the airport gates to the fire station, we have been able to put up barriers that segregated the airside from landside to perform our construction without any issues or delays."

The JV has been able to maintain a steady pace of progress by delineating significant areas within construction zones as non-secure spaces to allow access by a larger pool of subcontractors, easing personnel shortages and budget constraints that may result from restricting access only to security-credentialled workers. Careful health precautions are also practiced on the job sites to prevent the spread of illness and keep workers safe and healthy.

"Compliance with these procedures has kept the job sites running throughout the Covid-19 pandemic without any closures due to significant viral outbreaks," said Frey. "Many of these jobs sites are generously staffed to allow continuous 24/7 schedules to meet deadlines."

With 195 boarding gates serving more than 100 million passengers annually, ATL has more gates than any other global airport. This means that when updates are needed at ATL, project design must build in a cascade of preparations to maintain smooth airport operations while construction is underway on expansions or renovations that are often directly adjacent to active passenger gates or airplane taxiways. 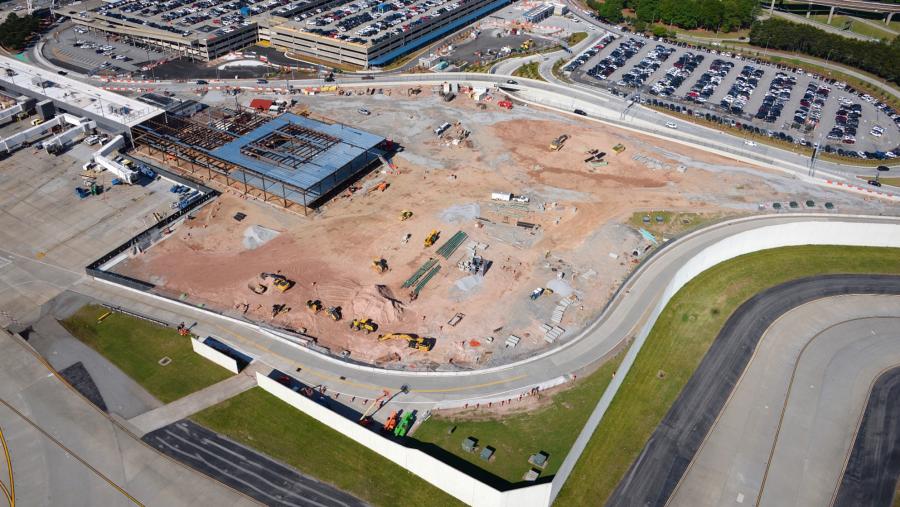 The airport is bringing five additional passenger gates to the 17 already in use on Concourse T, which illustrates the complex coordination such projects require. The JV is managing a significant number of construction projects at 11 distinct sites within the ATL property. These are part of a much larger framework for renovating and expanding ATL that aims to increase capacity, update existing facilities and enhance airport aesthetics. This long-term vision aligns with the goal of making this most heavily traveled airport also the most convenient to navigate, keeping it attractive both to passengers and to the airlines which choose to route their flights through ATL.

The JV noted that it has completed nearly all of the benchmarks and is getting ready to deliver the remaining gates.

The addition for the new gates is a large rectangular-shaped two-story structure, which has a metal frame and a Firestone TPO roof.

The exterior walls are clad with an insulated metal panel system and have a line of glazing to allow passengers to view the runways. The construction, adjacent to the existing gate structure, did not interfere with the ongoing airport operations.The large work site is surrounded by a mesh fence and being next to a two-lane road, provides easy access for equipment and materials.

The site provides ample space to store equipment and give the heavy equipment the leeway it requires to operate efficiently. Various types of materials have been stored on-site, such as pipe — metal and concrete — steel framing beams, exterior wall elements and components for the roof.

The first step for the new structure was to clear the site via excavation operations and prepare it for the framing. Crews relocated power lines, rerouted sewer lines, and prepared the site for a new drive lane, which required the removal of concrete. The excavation work was completed in 2020 and the installation of the frame that began in 2021 was completed earlier this year. The foundation and bottom floor were poured in 2021.

Work on the interior elements began in the fourth quarter of 2021 after the building was enclosed. The interior has electrical, HVAC and plumbing crews, along with those installing the interior finishes and equipment.

The excavation operations saw operators use large and small excavators, motor graders, dozers, loaders and other specialized equipment for airport runways. For the framing operations, certified cranes and manlifts are utilized.

The location of the buildings and underground infrastructure was mapped out in advance. The excavation equipment was equipped with GPS systems to meet specifications. All the measures required to minimize the blowing of dust and debris during excavation operations were initiated.

Demolition and excavation operations have generated a large amount of materials.

"Of the more than 6,700 tons of concrete, asphalt, metal, wood and solid waste materials generated as part of this project, more than 90 percent was diverted from landfills," Frey said

ATL was built in 1925 and has been expanding ever since. It quickly grew to become one of the busiest airports in the United States and is now the primary hub of Delta Airlines and includes additional facilities for Delta's maintenance, overhaul and repair operations. The airport covers 4,700 acres of land and boasts five parallel runways — the tallest airport control tower in the United States — and the largest workforce in the state of Georgia, employing more than 63,000 people.

"ATL lies within a two-hour flight radius for 80 percent of the United States population," said Frey. "Keeping such an active airport functioning smoothly during construction projects is a vital concern, since problems at one airport can have a ripple effect with the potential to snarl air traffic across the United States and even around the world. Any proposed changes at the airport require final approval from a committee of airline carrier representatives. Our JV works closely with the airport to keep ATL humming while steadily working to upgrade, expand, renovate and modernize this critical transportation hub."

Of the five new gates and the swing gate, three will become available in November 2022, with the balance in March 2023.

Skanska knows the airport well having completed improvements to and modernization of the airside of the Central Passenger Terminal Complex in December 2020. This work included the installation of new metal ceilings, LED lighting, flooring and wayfinding signage, the domestic concourses, train stations and tunnels.

The ATL Concourse T-North Extension project was designed by HKS and Corgan. CEG