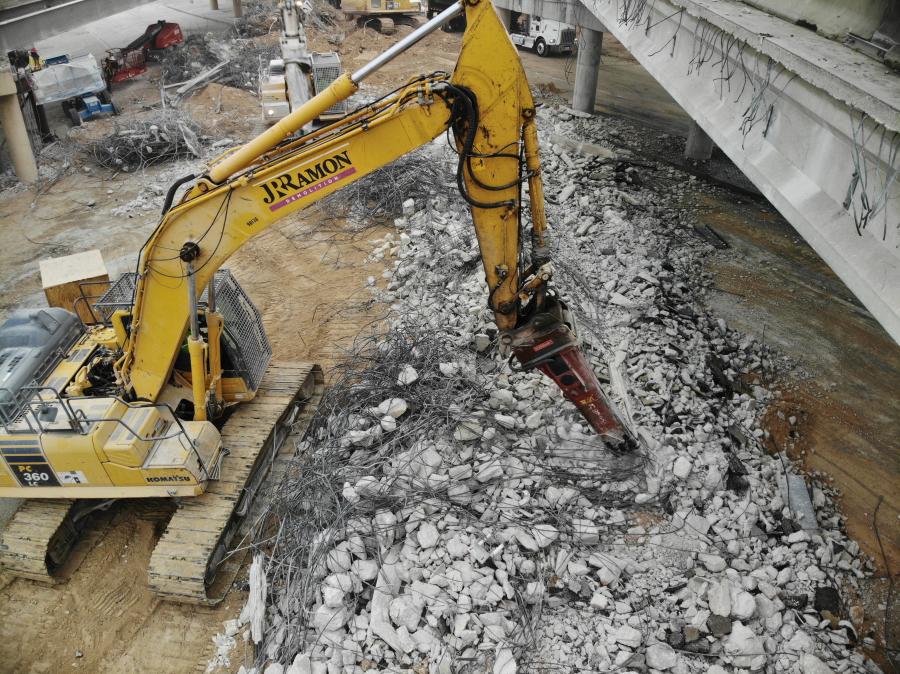 Demolition plans on Phase I of TxDOT’s bridge project call for the removal of the inside lanes of both north and southbound mainlanes of Loop 1604.

Phase I of TxDOT's Loop 1604 Bridge over Pat Booker Road replacement project was on a tight schedule. Plans call for the removal of the inside lanes of both north and southbound mainlanes of Loop 1604. New, expanded lanes are being constructed. In Phase II, the remaining mainlanes in both directions will be demolished and replaced.

The object of the project is to improve traffic flow in both directions, which is known to back up during rush hours and cause long delays.

TxDOT's strategy is to have minimal impact on the traveling public. Therefore, contractor Flatiron Construction and demolition specialists JR Ramon Demolition of San Antonio, Texas, were given a timeline of a 53-hour closure of Pat Booker Road and a 12-hour closure of Loop 1604 for Phase I demolition. A monumental task. 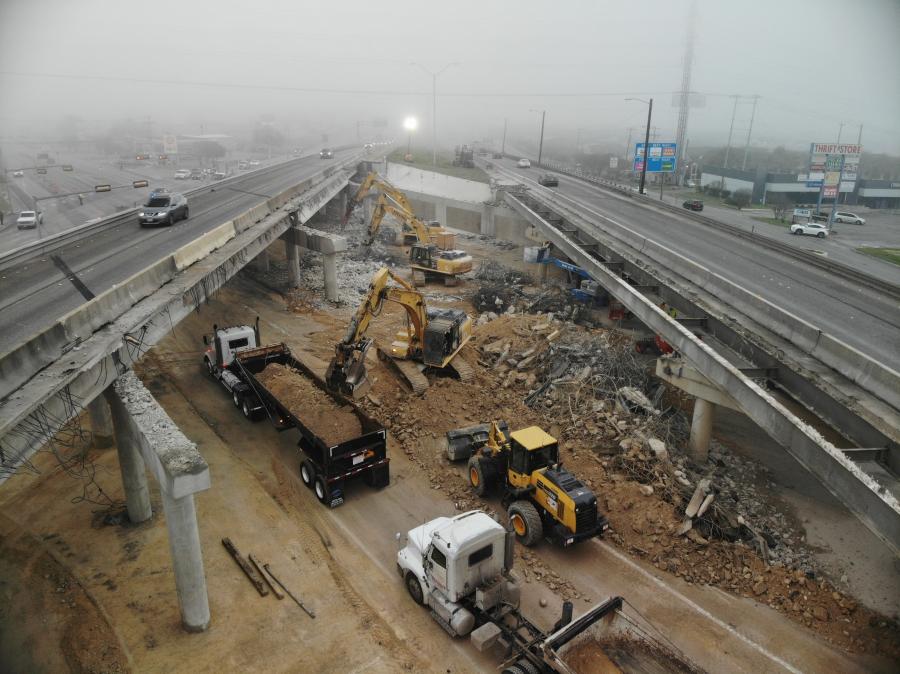 "The crew needs to work together like a well oiled machine right from the start, no room for hiccups, or downed equipment," said Tim Ramon of JR Ramon Demolition.

On March 1, the intersection was closed at 9 p.m. JR Ramon had a total of 40 crew members over four 12-hour shifts, working continuously until the job was complete — the 12-hour requirement was met with an hour to spare.The overall demolition phase was completed in 34 hours, 19 hours ahead of schedule..

Many factors contributed to an early completion.

Crews used specialized demolition equipment to break, rip, segregate and load various materials. Six demolition excavators were equipped with the OilQuick hydraulic coupling system, allowing the machines to use multiple attachments throughout the demolition process. OilQuick's coupler allows for the operator to switch tools without leaving the machine.

With the OilQuick hydraulic coupling system, changing tools takes minutes and allows the right attachment for the job to be at hand. This makes it possible to maximize productivity of the excavators without having to mobilize additional equipment, contributing to the early completion of the project. 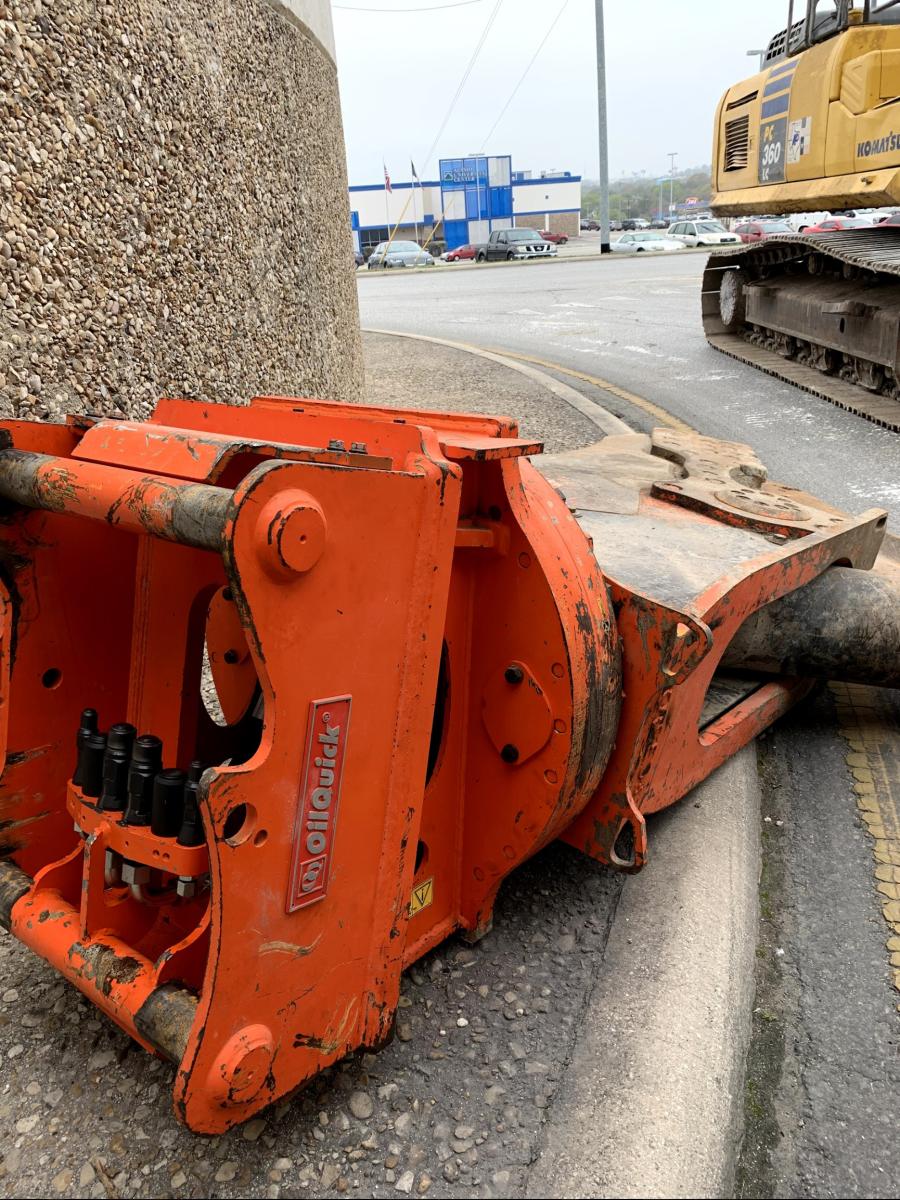 "When utilized to full potential it becomes more than just a coupler, it becomes an extremely safe, attachment system that greatly increases the productivity of any machine and attachments it's on," said Jason Johnson, division manager of OilQuick USA.

"I finish jobs early with one machine and a few attachments instead of a few machines with dedicated attachments, very happy to have the OQ system," said an equipment operator of JR Ramon Demolition.

The OilQuick hydraulic coupling system is available for excavators ranging from 1 to 132 tons. All systems are fitted with leak-free oil quick couplings, which also are eco-friendly, according to the company.

Attachments including concrete pulverizers, grapple buckets, hydraulic concrete breakers and metal shears allowed the excavators to make quick work of the demolition. Due to the ease of switching attachments with the OilQuick coupler, the company saved time and money.

Careful planning led to successful execution of the demolition phase of the contract. Although challenging, knowing ahead of time how many hours JR Ramon and Flatiron had to complete the job was key. Also, having subcontractor American Abatement on hand for lead-based paint removal helped the coordination of environmental abatement of hazardous materials. TxDOT allowed this process to be performed in conjuction with demolition activities.

This process also saved time and money as the team was able to coordinate the required work without additional road closures.

"If there's new technology we can invest in to keep the crew working in a safer and more efficient manner we don't hesitate," said Ramon.