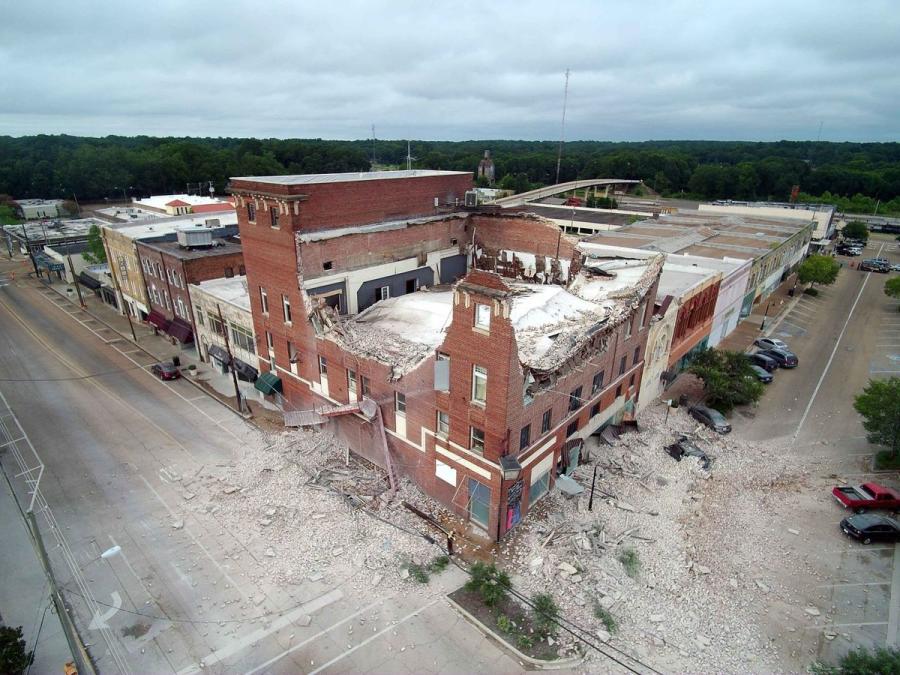 A Mississippi judge is demanding that the owner of a partially collapsed building take action to renovate or demolish it. (Glenn Sanders, Aerial Imaging Services photo)

MCCOMB, Miss. (AP) A Mississippi judge is demanding that the owner of a partially collapsed building take action to renovate or demolish it.

The top of the 97-year-old Kramer Roof building in McComb collapsed July 23. The downtown structure held a church and a performing arts center.

Terrance Alexander owned the building, but sold it several months ago to a limited liability company that he controls.

The Enterprise Journal reported Alexander appeared in court and had a tense exchange with Municipal Judge Brandon Frazier.

Alexander said he doesn't have money to repair the building, so he plans to tear it down. The judge showed frustration after city officials said Alexander had not applied for demolition permits.

“So, are you saying you have the authority to overrule the insurance company?” Alexander asked.

“Absolutely, I do.” Frazier said. “I can overrule the city, which I did. Do you remember that? I overruled the city and they tried to appeal me.”

The judge was referring to his decision to lift temporary condemnation orders on surrounding buildings after the cleanup and stabilization of the ruins of Kramer Roof had taken place.

Alexander said the city has done nothing after the cleanup of the building. After about 10 minutes of discussion, the judge gave Alexander 15 days to file an application to either repair or demolish the building. Frazier said he would hold Alexander in contempt of court for failing to do so.