Kelpe Contracting — In Service to Others

All you need to know about Tom Kelpe can be summed up by a story from his childhood. His father, Claude Howard Kelpe, dug the foundation for an addition to their modest home — by hand — at about the same time that the first backhoe loaders were hitting the market. When Claude started Kelpe Contracting in 1960, and took ownership of his first backhoe, he wanted to help ease that labor for others. It made an impression on his son who now runs the family business almost 60 years later.

"His philosophy was: ‘I am doing this as a service to the people,'" said Tom Kelpe, son of Claude Kelpe. "And that's still what we do. We will do a $100 job and we'll do a $10 million job. We will take care of you. We are service-oriented."

Kelpe has grown his business over the years with an expertise and a focus on underground water and utilities — and has expanded to include additional site work and material handling operations. What has allowed him to get ahead of the competition is dedication to his employees, a passion for equipment, and a deliberate attention to the nuance of each machine that provides his crews advantages in the field.

"Everybody around the world can buy pipe and fittings for about the same price, so the only way that we make money on a job is getting it done in a timely fashion," Kelpe said. "And good productive machinery and anything that we can do to make the operator and the job more productive is what we do."

Raised on a Backhoe

Kelpe remembers running his dad's first backhoe when he was seven years old. He's 65 today and has a 25-year-old son who works in the company as an equipment operator — also currently pursuing a master's degree in Construction Management. 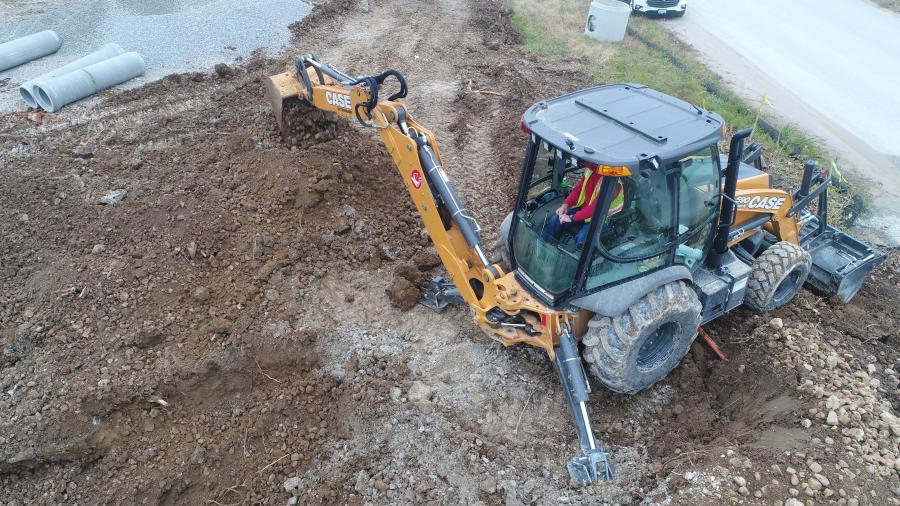 Kelpe's history with Case can be traced back to quality and a bold warranty. Claude Kelpe bought his first Case 530 backhoe in the fall of 1964, in large part, because of the company's 12-month, unlimited hour warranty and the iconic Case eagle branding.

"Everybody else had 90-day warranties, but I will tell you, that Case 530 was so far superior to anything else built at that time," Kelpe said. "I ran it at 12 years old, so I was a decent operator, and I remember thinking ‘wow, it's got brakes [innovative at the time] — it loaded trucks well and was really far superior."

From that point, dozens of Case backhoes have made it through Kelpe Contracting's fleet.

Today, Kelpe has a fleet of 20 Case backhoes, a mix of 580- and 590-class machines, all the way up to the 590 Super N. On jobs where Kelpe is placing heavy, 10,000-lb. structures, the company leverages the longer reach and extra power of that machine. On typical digging jobs, such as water mains, which can be significantly shallower, the Case 580 is the backhoe of choice. 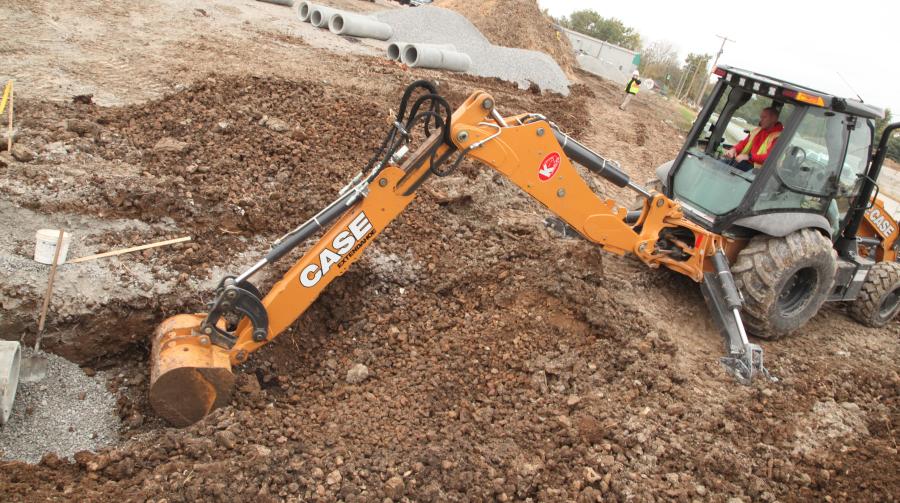 Each piece in Kelpe's fleet is outfitted with maximum features — such as the Extendahoe — to ensure operator comfort, productivity and efficiency. One of those critical features is Comfort Steer — a Case-exclusive that allows operators to maneuver quickly, even in confined areas, by taking only 1.5 turns of the steering wheel to go from lock-to-lock (compared to three turns on standard models).

"We do get competitive prices and I ask: ‘Can you give me comfort steer?' And the answer was ‘No, we don't offer that.' And when you're doing a lot of maneuvering, it's a very handy option to have."

He's also a believer in outfitting each machine with a four-in-one bucket — another Case-original solution carried through the years — which he regularly uses as a clam shell, a material handler and as a standard bucket.

"You can dump a truckload of rock on this street right here and I'll clean it up in a matter of minutes," he said. "All you have to do is sweep it in. Literally, there's no shoveling involved. Picking up pipe, picking up brush, it's just a wonderful tool."

"And the mechanical quick coupler and the side dump bucket and the forks on our brand-new backhoes, all of those things are like a mechanic with tools in his toolbox." 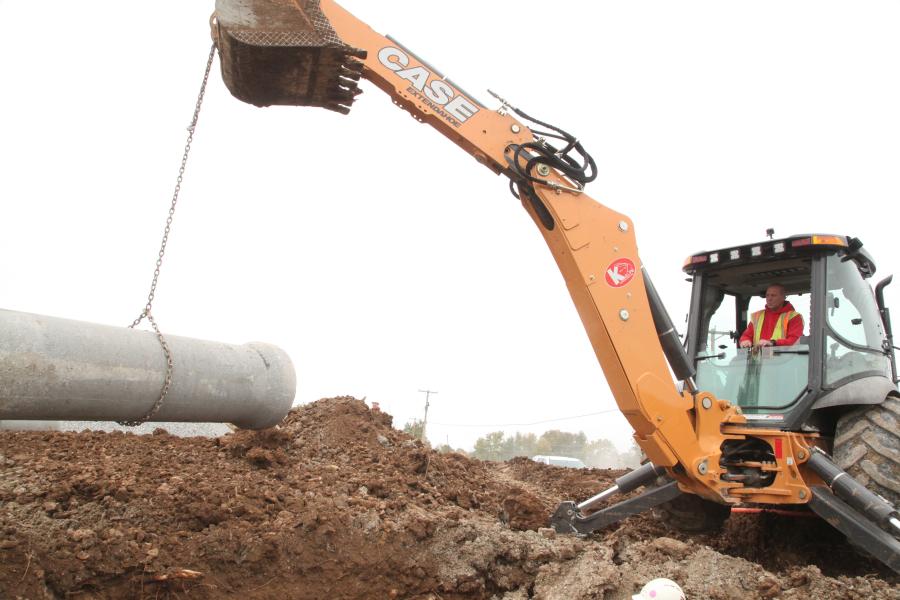 PowerLift is another popular option that Kelpe outfits most of his machines with, which gives the equipment the power to lift more weight than standard capacity — and newer models even feature the Case-exclusive PowerBoost technology. PowerBoost improves upon the PowerLift functionality by providing the operator with a momentary boost of increased hydraulic power without decreasing engine RPM (so as not to affect speed/cycle times). This feature is ideal for lifting and digging through tough conditions, including hard clay, rock and frost.

"[PowerLift] takes it to secondary relief pressure," he said. "It's really a wonderful option — and Case is more stable than competitive backhoes."

There also have been significant changes to the controls and interiors of Case backhoes over the years — although Kelpe still orders his machines with a mix of "Case Controls" and "Pilot" joystick controls — although he personally swears by the Case controls.

"I'll outmaneuver anybody on hillsides, steep terrain — having your hand on the crowd and the boom and being able to turn around and use the loader, you can't do that with anything else."

A Partnership of Respect

Like the underground utilities that run throughout St. Louis, maintenance and service are key to maintaining quality and reliability. A big part of Kelpe Contracting's longstanding history is the company's partnership with Case dealer Luby Equipment. Like a successful marriage, Luby and Kelpe have been working together for nearly 40 years. Over those decades, the two organizations have developed a mutual respect and trust for one another. 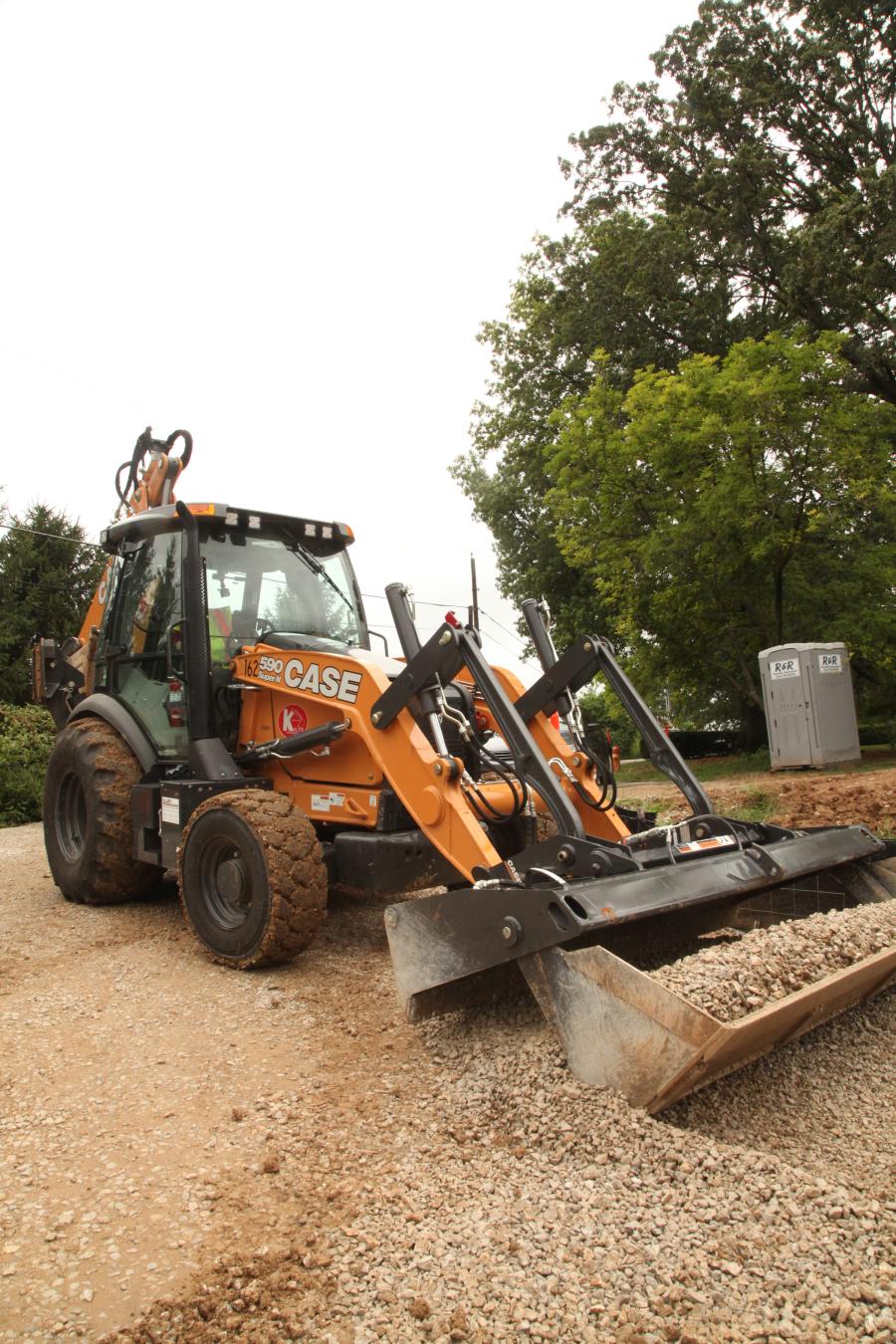 "They have been professional; they have been supportive, and they have gone to bat for me." Kelpe said. "I consider them my friends … and that's a nice thing to have."

The partnership mirror's Kelpe's commitment to its customers and the utilities it builds and supports. Above and beyond the sales support that Luby is continually on top of, Kelpe knows that when he approaches the team at Luby with a problem or request, he's going to be treated like a friend and partner, not just a customer.

"They are objective, polite and respectful," Kelpe said. "They've got a wonderful product, but they're not arrogant about it."

At the end of the day, Kelpe said, he's in a people business, and he appreciates the employees, partners and clients who align in that approach, as well as the equipment that helps them get the job done.

"We are a service, but the two things that really make the business are the people that I have working for me and the equipment that I have," he said. "Even with 100 employees, I personally interview everyone and I want to know them. I have people that have been here 40 years and retire here. I pride myself in caring about people and I run my business according to that."

While the majority of Kelpe Contracting's fleet consists of Case backhoes, Tom Kelpe has diversified his equipment over the years for site-specific work. Two of those recent additions are a machine control-equipped Case 850M dozer, and the Case CX75C SR SR midi-excavator.

When doing street work in busy metropolitan areas, Kelpe deploys the CX75C SR for loading debris into dump trucks in a very small footprint. With a near zero tail swing, the CX75C SR allows Kelpe to keep a full lane open on two-lane roads when excavating in the other lane.

"It's quiet, it's fast, it's smooth," Kelpe said of the CX75. "The backhoe can do anything that the mid-size excavator can, except for spin around 180 degrees within its footprint and load behind it. Everybody loves it."

The 850M dozer, meanwhile, is machine control-enabled machine used for grading and finish grading. A key benefit is the 850M's weight and its ability to angle the blade so that Kelpe's team can legally haul the machine on a trailer within state DOT regulations.

"Having a 120-horsepower dozer that we can put on our trailer and legally haul, that's huge. It's absolutely huge," Kelpe said. "And then the GPS just makes us more productive. The GPS system is superior to the competition, especially the user friendliness of it."