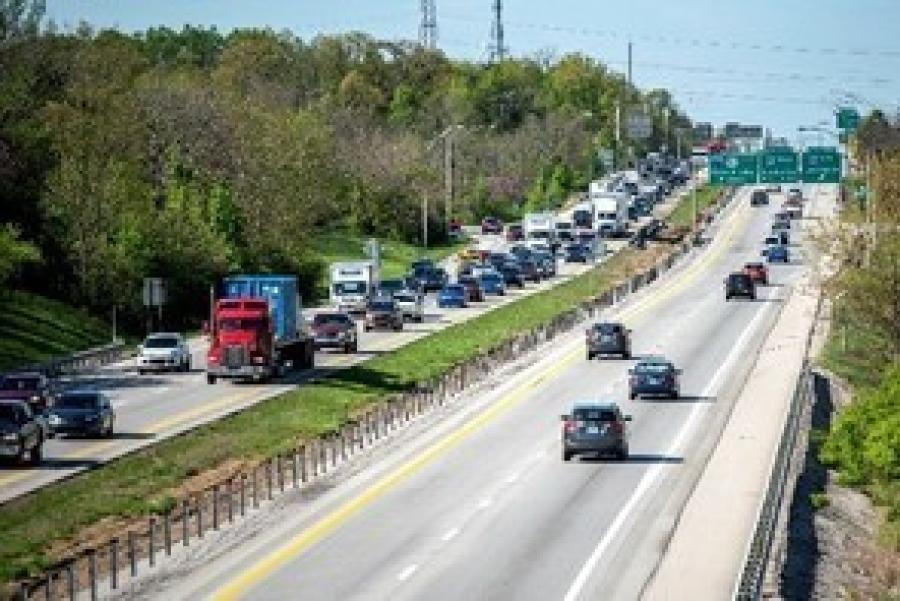 The Kentucky Transportation Cabinet (KYTC) announced plans April 26 for a $180 million design-build project that will improve safety and reduce congestion through a heavily traveled interstate corridor in Jefferson and Oldham counties. It will be the largest single construction project in Kentucky since the Ohio River Bridges Project was completed in 2016

The four-year project, called I-Move Kentucky, will add lane capacity and include upgrades at two, major interchanges on Interstates 265, I-71 and I-64. Combining the priority projects into a single construction project and using a design-build approach will allow the Cabinet to make improvements more quickly and efficiently.

"I-Move Kentucky will improve safety and mobility on three major interstates that join together in eastern Jefferson County and will allow travelers and freight to move freely through the region," KYTC Secretary Greg Thomas said. "These were among the most important projects identified during last year's SHIFT prioritization. By tackling them together, we're saving Kentucky taxpayers time and money."

Four Projects in One

The four projects included in I-Move Kentucky were identified as statewide priorities by SHIFT.

"Interstates drive Kentucky's economy," said state Sen. Ernie Harris, chairman of the Senate Transportation Committee. "These needed transportation improvements will move citizens and commerce faster and safer in this bustling region of the state where hundreds of thousands of people live, work and do businesses. I'm pleased that Kentucky is able to fast-track them through the I-Move Kentucky project."

"This is a tremendous project — not just for those of us who use these interstates daily but also for citizens throughout the region and across the state," said state Rep. Jerry T. Miller, who represents Jefferson and Oldham counties. "These interstates support tens of thousands of jobs at manufacturing, distribution and logistics businesses that rely on them to move products through this vital freight corridor."

To complete these projects more quickly and efficiently, KYTC will utilize a design-build approach similar to the construction method used for the Ohio River Bridges Project. Last year, the legislature passed HB 385 to provide KYTC with more flexibility in using the design-build approach for maximum efficiency. The Cabinet also is utilizing design-build for two projects in northern Kentucky.

Design-build is an effective contracting approach to deliver projects faster and often at lower cost than traditional design-bid-build projects. Because the project design and construction responsibilities are handled by a single project team instead of multiple project-specific teams, design-build also allows for improved coordination to limit traffic impacts during large, multi- phase construction projects.

KYTC has notified the construction industry that it is seeking teams to compete for the opportunity to build the I-Move Kentucky project, and a team will be selected this fall. The selection will be based on the "best value" provided by teams.

In addition to the four projects identified, KYTC will provide contractors with a list of other needs in the project corridor, and will evaluate teams' ability to address these other needs as part of this project. Examples may include widening additional areas of the interstates or additional interstate ramp improvements.

Following the selection of a design-build team this fall, KYTC anticipates preconstruction work would begin late in 2019 and continue into next year. This work would include conducting additional engineering analysis and plan development.

Construction is expected to begin on the I-71/I-265 interchange improvements in early spring next year and be completed by the end of 2020. The timetable for other phases of the project will be determined once a design-build team is selected.

Construction is scheduled to last through 2023.