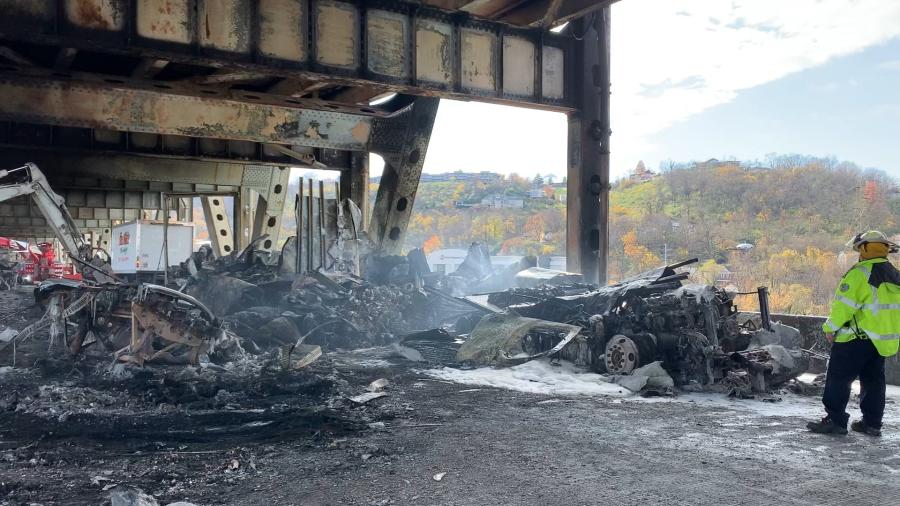 In the early morning hours of Nov. 11, a truck accident on the Brent Spence Bridge, which spans the Ohio River from northern Kentucky to downtown Cincinnati, Ohio, led to a fire and shutdown of the twin-decked structure.

The 57-year-old double-decker cantilevered bridge carries both Interstates 71 and 75 traffic between the two states.

But the collision of one truck carrying potassium hydroxide with another that had jackknifed on the span spilled the flammable substance across northbound I-75 and set off a fire that damaged both the upper and lower decks of the bridge on the Kentucky side of the Ohio River.

As a result, navigational boat traffic on the major waterway was closed by the Kentucky Transportation Council (KYTC) and the U.S. Coast Guard until Nov. 14 while the bridge damage was being assessed.

By mid-morning Nov. 12, crews had worked to remove all accident debris on the bridge and officials from the KYTC, the Ohio Department of Transportation (ODOT), the Federal Highway Administration (FHA) and four consultant teams were on the structure for a walkthrough inspection.

After the Ohio River was reopened around the bridge, KYTC Secretary Jim Gray announced Nov. 16 the awarding of a contract to Kokosing Construction Co. in Westerville, Ohio, to repair and reopen the span. 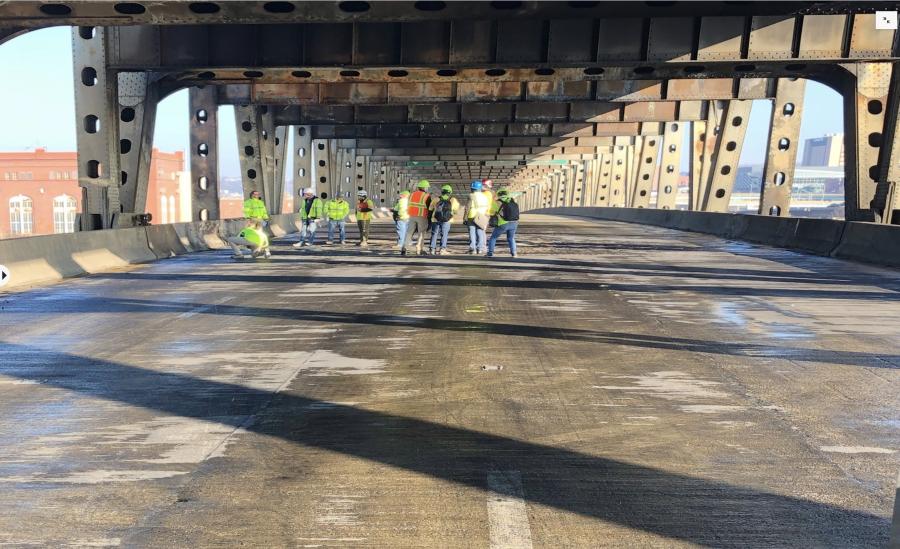 The veteran contractor submitted a low bid of $3,127,528 and committed to having the bridge reopened to full vehicle traffic by Dec. 23, according to the KYTC. There will be additional costs — the exact amount yet to be determined — for ancillary expenses such as traffic control, construction inspection and additional steel.

The U.S. Department of Transportation also has authorized up to $12 million in emergency relief reimbursement funding for expenses related to the project.

Officials with the KYTC said the potassium hydroxide-fueled fire on the Brent Spence Bridge burned at temperatures up to 1,500 degrees Fahrenheit, which, when extinguished and allowed to cool down, led to a scrutiny of the steel work at the accident site.

After inspecting the damage and performing advanced steel testing, engineers determined repairs to the span will include replacement of a section of the upper concrete deck, plus steel beams known as stringers that support the deck weight. A section of the lower deck will be milled out and filled with new concrete but does not require complete replacement. Also to be replaced is a lengthy stretch of concrete bridge railing. Beyond those items will be electrical and drainage work and cosmetic fixes such as restriping the pavement markings.

As some potassium hydroxide spilled into the Ohio River, a response team from the Kentucky Energy and Environment Cabinet was quickly on the scene of the mishap, where it determined the quantity of the chemical was not enough be an environmental concern. But the department stayed in communication with local water companies about the fire suppressant foam that entered the river. In addition, a boom was placed on the surface of the water to contain any materials that may have fallen in the river during cleanup efforts.

By agreement between Kentucky and Ohio, KYTC is the maintenance lead on the Brent Spence Bridge. The inspection and solution process following the incident will be a joint effort between both states and the Federal Highway Administration. CEG