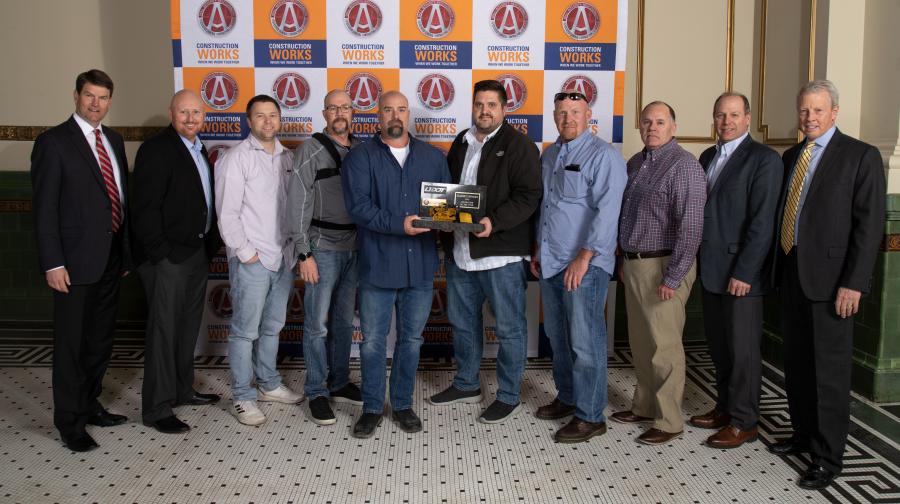 Honesty, teamwork and customer service paid off nicely for one Utah County contractor, earning the company the 2019 Utah Department of Transportation Contractor of the Year award. The award was presented last month to Kilgore Companies Southern Utah Construction Group at the Associated General Contractors (AGC) of Utah's annual banquet. Kilgore was nominated by UDOT.

"Every project starts with a team of relative strangers holding a flawed set of drawings, an over-simplistic plan of execution, and inflated expectations. To that we fold in a measure of uncooperative weather, a spoonful of buried surprises, a dash of design changes, and a smidge of impatient motorists, anxious residents, breakdowns, shortages and other ingredients on hand. That can make for a very tricky recipe. Today, we recognize a team that was able to mix those ingredients into a successful and enjoyable project."

Kilgore Companies was founded by Jason Kilgore in 2000 with a focus on paving maintenance, said Justin Nelson, director of human resources. Kilgore expanded the business to include contracting, Ready Mix and aggregates. Less than a decade ago, Kilgore had about 350 to 400 employees. Today, the company is in five western states — Colorado, Idaho, Nevada, Utah and Wyoming— with about 1,600 employees. They are an acquisitions company, Nelson said, inheriting a variety of equipment as they acquire new businesses. That gives them a varied inventory of heavy equipment.

"We buy equipment and there is some we'll lease," Nelson said. "Some people prefer one brand over another in different markets and different operators. We're not dedicated to one. We have all of them, Cat, John Deere, Komatsu, Bobcat."

Nelson said nominations are determined by UDOT through feedback from state engineers, the motoring public and residents, as well as the quality of the work, the timeliness and the contractor's ability to meet job specifications.

"All that is what the DOT will consider and then they send in nominations to the AGC and so from that that's where they pick," Nelson said. "Let's say there's 1,000 jobs that are done and 10 nominations go into the AGC and then the AGC reads the submittals and that's how they're collected. It is an AGC award, but UDOT provides the nomination write up."

The benefits to winning the award include peer recognition and, of course, great public relations, he said.

"You're in a very competitive group in the industry," Nelson said. "It is the top award: Contactor of the Year. If I need a driveway paved, I'm going to select someone who is going to do me a good job. It's nice to know the professionalism and proficiency that comes with that."

The nominating letter noted: "To start, the team was very open in discussing risks, possible outcomes and expected solutions. They were honest in recognizing past failures and committed to making this a different experience. Actions have shown that commitment to be beyond 100 percent. The contractor was not just aware of residents, but concerned with residents. They met personally with all the stakeholders. When problems arose, it was never ‘your' problem or ‘my' problem, but always ‘our' problem, and they were always discussed with solutions already laid on the table. Design changes were never used as a chance to boost profits or pad pockets — they were always fair and never in excess. They got permission for their ideas before starting work, even though they were within specification. They were forward thinking in proposing alternatives that would meet design intent, but save time, money or improve functionality. They simply wanted the customer to be happy—and they frequently asked if there was anything that we needed. And notably, this was not a team of independent contractors and subs. The prime did an excellent job of scheduling, managing, and working their subs in one united front."

"UDOT, Kilgore, subcontractors and cities all came together with a common goal of making this a successful project for all involved," he said. "We were able to work through issues as a team and find solutions that kept the project on time and within budget. Also, I can say that along the way we were able to make some new friends. I look forward to working with this team again in the future and having another successful project." CEG