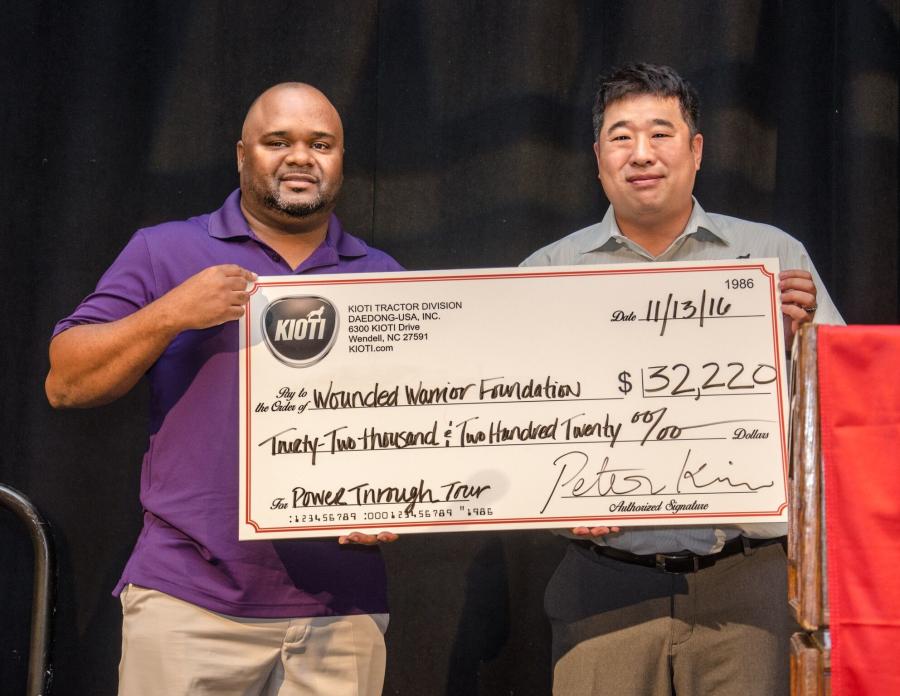 “I was in disbelief when I found out I won,” said Myers. “I have 55-acres of timberland and can't wait to put this tractor to good use. I've also been a supporter of Wounded Warrior Project for many years and appreciate the contributions made by Trace Adkins and KIOTI Tractor to help heroes on the road to recovery.”

For a $25 donation to Wounded Warrior Project, fans entered for a chance to win Adkins' own autographed KIOTI DK65 tractor and attached front end loader and backhoe. The promotion closed on October 19, 2016.

KIOTI presented the $32,220 check at their annual dealer meeting in November of 2016. Former Army Staff Sergeant Christopher Gordon accepted the check on behalf of the Wounded Warrior Project.

KIOTI Tractor and Trace Adkins' fans who are interested in recapping the full Power Through Tour experience can visit http://www.kiotiandtrace.com. The site pays tribute to KIOTI and Trace's long-running relationship and includes behind the scenes footage of Adkins working his KIOTI DK65 on his Tennessee property.

“We'd like to thank Trace Adkins for partnering with us and for his unfailing support throughout the years,” says Peter Dong-Kyun Kim, president and CEO of Daedong-USA, Inc. “Congratulations to Mr. Myers. We're excited for you to work your land with the same rugged tractor that Trace Adkins used. We know you'll like it as much as he did.”