Junk metal. What a misnomer. Rick Santaniello knows better. In fact, the owner of Klein Recycling favorably compares the operation of his full-service metal recycling company to that of high-profile Wall Street brokers.

"We are trading a commodity, so basically you go where the markets are. Whoever has the bigger need for a material, they call for it," Santaniello said. "We play the markets. It's no different than what Wall Street does. It's just that we do it with metal." 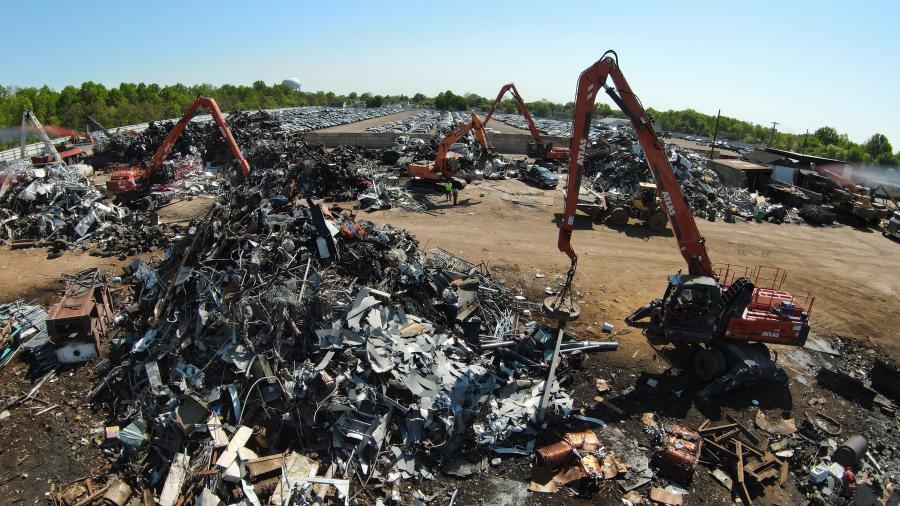 The Hillsborough, N.J., company markets a lot of ferrous and nonferrous metal, averaging between 2.5 and 4.5 million lbs. a week depending on the time of year and market demand. That adds up annually to 130-230 million lbs. received, processed and sold. Doesn't sound like junk at all.

Klein Recycling began operation in 1947 with Santaniello buying the company in 2004. It has evolved over the years and today serves large-volume Fortune 500 companies, small companies with custom recycling needs and "door trade," the drop-by customers with an old refrigerator or pile of metal roofing to sell.

The biggest scrap-metal sellers include industrial manufacturers, municipalities and demolition contractors. All of the accumulated metal is trucked in by Klein or delivered by customers, weighed for payment, cut to size as needed, separated according to alloy, and shipped out to whatever client is buying the commodity that day.

End-users of the recycled metal vary widely. Some are in the United States, others abroad. Santaniello said the metal is delivered to where it is needed for immediate re-use in manufacturing applications. "We have built ourselves up to that point. We ship it to where the market is calling for it, ship it to who needs it."

The yard is the center place of the operation. It's where the metal scrap accumulates, is processed and shipped out. Handling the scrap material is the responsibility of 73 employees. They receive it six days a week when the gates are open, but stay busy seven days a week sizing, segregating and preparing the scrap for shipment. 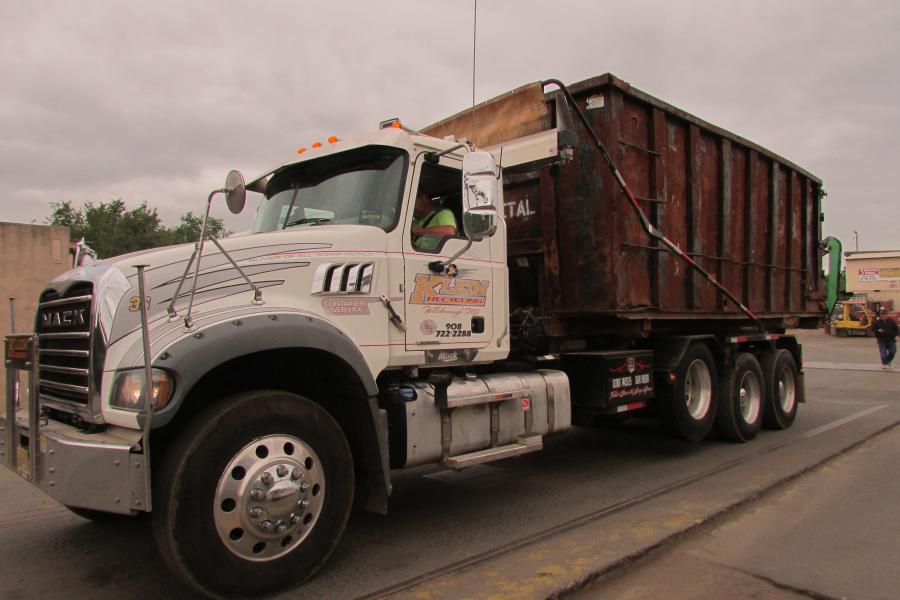 Another 40 employees staff the office or haul material in a fleet of 16 Klein trucks including flatbed, open-top and roll-off-container rigs. As needed, the company regularly subcontracts additional hauling to a pair of trucking firms that have worked closely with Klein Recycling for years. "They are very efficient and we all work together," the company owner said of the trucking firms. "We're different companies, but we work as one."

A big component of the scrap metal collection process is roll-off containers — 1,100 of them — that Klein deploys to construction sites and demolition projects. They range in capacity from 10 cu. yds. to 50 cu. yds. Company President John Roros calls the large stock of containers a distinct competitive advantage for Klein Recycling.

"It's something that separates us from our competitors," he said. "We offer superior customer service and market value pricing, but most importantly is our access to over 1,100 containers at any given moment to service our customers."

Santaniello calls it part of Klein's pledge to provide what customers need.

"We are a service business. These guys don't want metal on the ground. They want you to do your job and leave them alone and make it as non-disruptive as possible. When these guys call and say Bob Smith Demo needs 15 containers dropped off, it's not a matter of, ‘Oh, we can't do that.' We get them there and as soon as we do, they're loading them. They want to know that someone is looking out for them and that's what we do."

Another critical component of the operation is the machinery in the yard that processes the myriad kinds of metal hauled in. Increasingly, Klein Recycling is depending on Atlas material handlers to do the job. The specialized equipment unloads and loads trucks, one of the booms fitted with a magnet. "They are the backbone of our operation. We have to have three or four of them swinging every day or we are in trouble."

Santaniello is sold on Atlas. "I'll tell you how I feel about the Atlas. It's a great machine. They run beautifully. They run smooth and quick. They are very reliable and very easy to operate. I have an old Atlas out back that I bought years ago. We ran it into the ground. I'm waiting for when I have some downtime and I'm going to put a new motor in it. It's a 2006 model and it will still work fine."

The dependability of the Atlas equipment is a bottom-line virtue, the owner said. 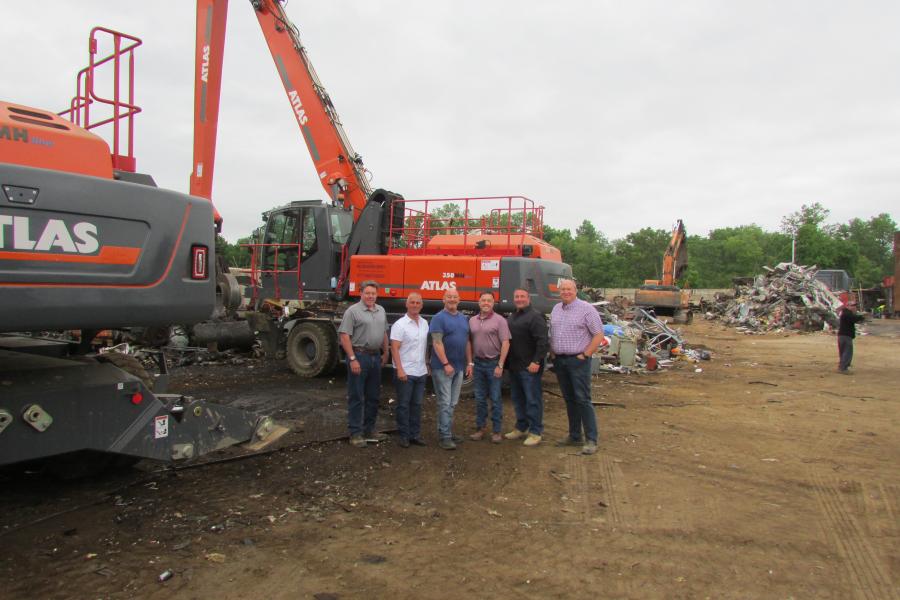 "In my business, it's a matter of getting the material out fast. Every time my machine is down, I'm losing money. They are great machines and they don't cost you a lot of money compared to some other brands. Atlas is the best machine for this business."

The company acquires its Atlas material-handlers from New Millennium Rentals Inc., a Florida, N.Y., based company with a branch location in Jessup, Md., with Ti Doeller as its business development manager in the Mid-Atlantic region. It opened its doors in 2000 to supply specialized excavators and attachment rental packages to recycling, environmental, demolition and reconstruction industries. The company has evolved into a full-service specialty markets equipment distributor. Representing world class lines such as Atlas material handlers and Genesis demolition/recycling attachments to name a few.

New Millennium owner and President Peter E. Menner first interacted with Klein Recycling when it bid on a shear package. The company didn't win the bid, but it was an introduction that led to Santaniello calling Menner when Klein began looking for a different brand of material-handlers.

New Millennium technicians subsequently repaired a piece of Klein equipment in the yard that other companies hadn't been able fix in three years.

"The guy came in and pulled the panel off and said, ‘I know what it is," and went to his truck for a part and started up the machine." That kind of support plus the virtues of the Atlas equipment itself persuaded Santaniello to switch suppliers.

"I called up Peter one time and said, ‘I'm in a jam.' He asked what I needed. I told him I needed two material-handlers and I needed them right away. He said he would have one to me by Tuesday and that was it. To get that kind of service is why I deal with them."

"If I order a part today, either they drop it off or they will have it here the next day. They stock everything. If we go down and we have a, say, pump problem, we can't wait six weeks to get it. I call them. They bring the part. I put it in and it's back to work. The other company we had was not doing that."

New Millennium took on the Atlas line of equipment about 18 months ago. The latest equipment transaction with Klein Recycling is the sale of three Atlas 350 MH handlers. The 350 MH is an 80,000-lb. machine with a total reach of 52 ft. It features a riser cab and rear and side cameras for operator awareness. Santaniello calls it "a more meaty machine," meaning it is sturdy and stable in operation. 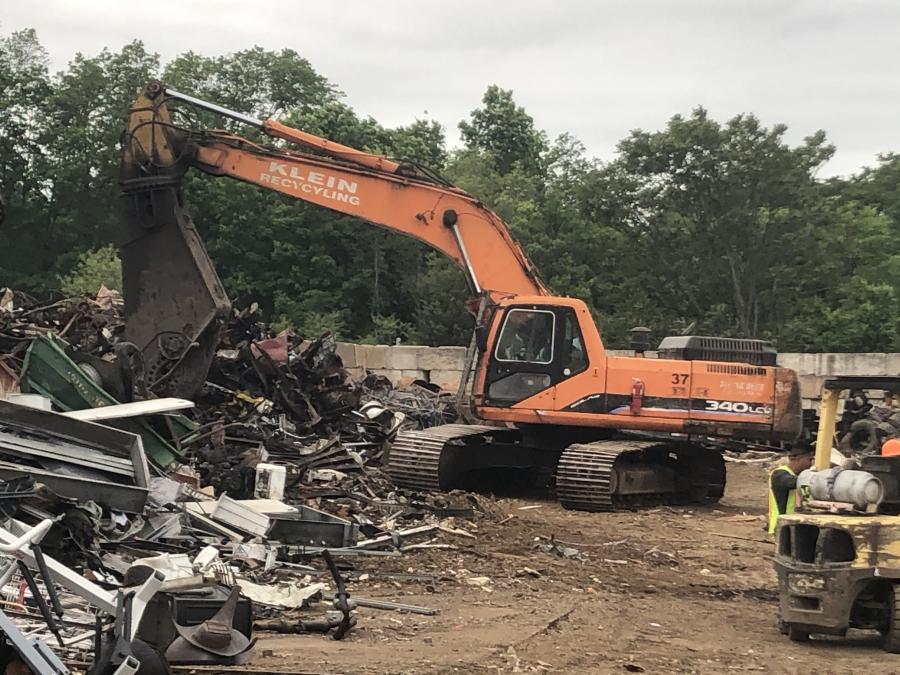 "Atlas is what I call a military grade machine," Jim Gill, business development manager of New Millennium Rentals, said in describing the German-made handler. "It is built so operators can simply operate and control the machine. It is built to last for long, long hours. It doesn't have a lot of bells and whistles. It just does things it's supposed to do — lift things and put them down again. That's all the machine's operator wants it to do."

Gill added that his experience has convinced him that Atlas material-handlers are superior products. "I have been around a long time. These machines simply do the job faster and more economically. When an Atlas machine operator puts down the stabilizers, the machine sits on a larger footprint than any of its competitors, so it is more stable. It's little things Atlas engineers do on these machines that make them very profitable."

So-called "military grade" material-handling equipment probably is what Klein Recycling needs, considering the company puts 3,000-3,500 hours a year on a machine, working seven days a week. "If we have a machine down for several weeks, it's debilitating for me. With everything we have going on and all the jobs, I can't do that," said Santaniello.

Klein Recycling operates mostly in the Tri-State area of New York, New Jersey and Pennsylvania, but takes on projects across the country. Some are turnkey demolition jobs, others involve removal of old equipment, including newspaper presses.

Looking ahead, Santaniello expects changes to continue to challenge his company. Environmental regulations have "gotten crazy," he said, "but that's the world we live in. The markets are changing constantly. Very cyclical. You have to be aware. If you have material to sell on Monday and the market is strong, you should do it, because you never know what is going to happen on Wednesday." Just like on Wall Street.

He remembers when the national economy collapsed in 2008-09 and he had piles of steel in the yard with everybody canceling their orders. "I don't want to have a ton of steel sitting around. You have to get it out as quickly as possible." 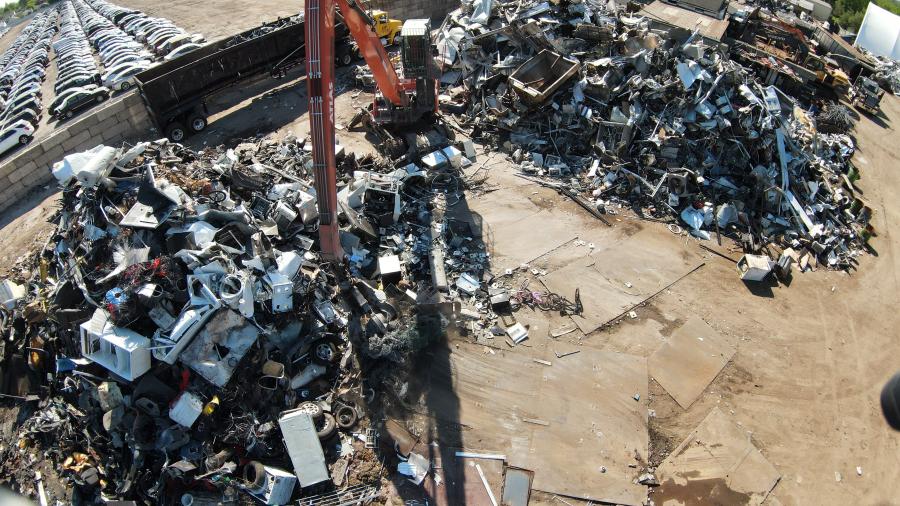 And then there are the workforce issues that continue to bedevil construction, demolition and associated industries. "This is one of the industries that is hardest hit for labor," Menner said. "It is a tough, dirty environment and people have to work hard. I'm talking about workers out in the field. It's tough to attract people for that and when you find them, you have to work to hold on to them."

DePascale, the sales vice president, said salespeople in the industry struggle, too, especially during the last year of pandemic issues. "It was difficult for them to cold call and get in touch with decision-makers. The whole dynamic of the recycling industry has changed. You have to focus on the relationships you have and hope they provide new business opportunities."

He said relationships within the industry are key, with demolition companies looking to recycling companies for tips on where the market is going so they can bid on the hottest projects.

"You can give them an edge because you know where the market is on the upswing. You are partnering with these individuals and helping them be successful, which is extremely important in our business."

The working relationship of Santaniello, DePascale and Roros also is instrumental to the success of Klein Recycling," according to the owner. "It's like a comedy show. Anthony will say, ‘I just bring in the material and you have to figure out how to get it out.' And I say to John, "I just get it ready and you have to figure out where it's going.' We play to each other's strengths. We all do our jobs and stay in our boxes very well."

Added Santaniello: "And when I need service, Peter is the guy I go to. I don't want to make a bunch of calls. That's the good thing that New Millennium Rentals provides: You call them, tell them what the problem is, and they go to work." CEG