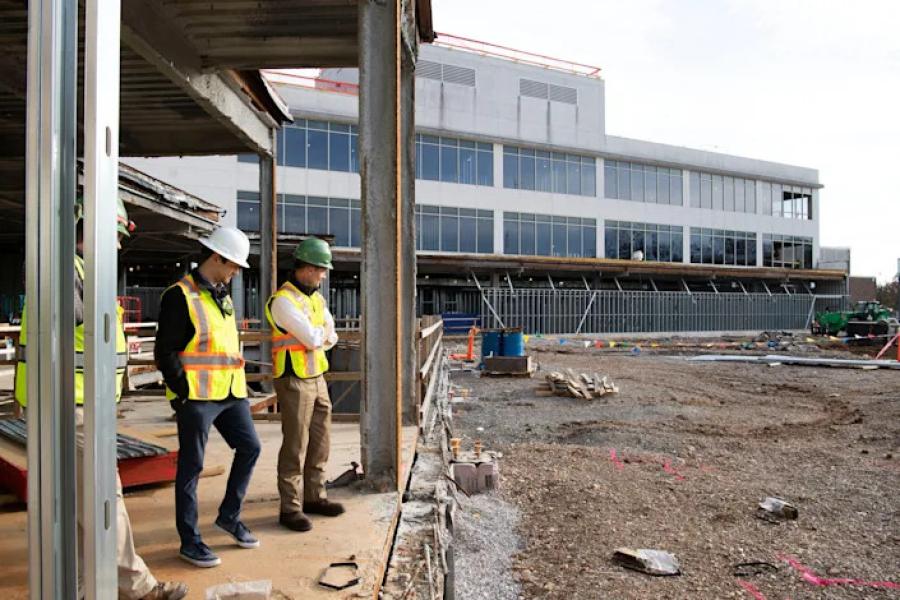 Ongoing construction at the Public Safety Complex on Nov. 22, 2021.

Building crews in Knoxville, Tenn., have been bringing parts of the shuttered Tennova St. Mary's Hospital campus back to life as a city public safety complex over the past several months

Officials in the eastern Tennessee city, though, note that construction and material costs for the project have skyrocketed over the last two years.

Originally pegged as a $40 million project with an added $6.5 million needed to raze vacant buildings on the campus, the project is now estimated to cost $65 million, the News-Sentinel reported earlier in the year.

"The bottom line is things got really expensive," said David Brace, chief operations officer and deputy to Knoxville Mayor Indya Kincannon. "I think anybody in construction would tell you that. Our original estimates were in line."

The higher costs contributed to a delay of a few months from the original timeframe, city officials said.

Regardless, contractors plan to finish construction in the fall, and the city expects Knoxville Police Department (KPD) and other public safety agencies will move in sometime thereafter.

New Type of Complex to Replace an Older One

The sloping property had been home to the large Magdalen Clarke Tower, which was the earlier hospital facility seen from Interstate 40, as well as a cluster of three buildings and a parking garage that fronted East Oldham Avenue.

The campus buildings were mostly used as doctors' offices and have since been stripped bare and restructured for the city's purposes.

The new police headquarters will take up the most room on the campus, found inside former offices on the corner of East Oldham and St. Mary Street. Nearby space also will hold the city's courts and its pension offices.

On the opposite corner of East Oldham, along Huron Street, the new fire department headquarters will be joined by a backup 911 facility. It also will be home to the Knoxville/Knox County Emergency Management Agency staff and a new emergency operations center, the city's war room in case of severe weather or other disasters.

The former hospital space inside the Magdalen Clarke Tower will not house any of the city offices. Instead, Lincoln Memorial University owns and is updating the space for its nursing and dentistry program and administrative offices. Once open, the university expects to have some 600 students on campus.

The original St. Mary's, built in 1929, is still on the property. The gothic-style building is structurally sound but has been empty for years. The city demolished adjoining buildings to clear room for the public safety complex but plans to keep the 93-year-old hospital building standing.

The old structure, and its surrounding five acres, are owned by the city, but will be managed by Knoxville's Community Development Corp. (KCDC).

The agency's executive director, Ben Bentley, told the News-Sentinel that plans have not yet been formulated as to how the old hospital will be utilized.

Due to the combination of neighborhoods surrounding the property and Knoxville's affordable housing shortage, Bentley explained that the property, including the old hospital, could become workforce or low-income housing.

Other things to know about Knoxville's new public safety complex include:

During her 2018 state of the city address, then-Mayor Madeline Rogero revealed plans for a new public safety complex to address the cramped, deteriorating KPD headquarters on Howard Baker Drive.

According to the city, it was built to accommodate 219 officers and civilian employees, but KPD currently has more than 500 employees.

Months later, Tennova announced it would shut down St. Mary's, then called the Physicians Regional Medical Center, by the end of 2018. Following its closure, the once bustling area off Broadway on Knoxville's north side became a ghost town, the News-Sentinel noted.

By the summer of 2019, though, city officials approved plans to move the KPD headquarters there and make the site a public safety campus.