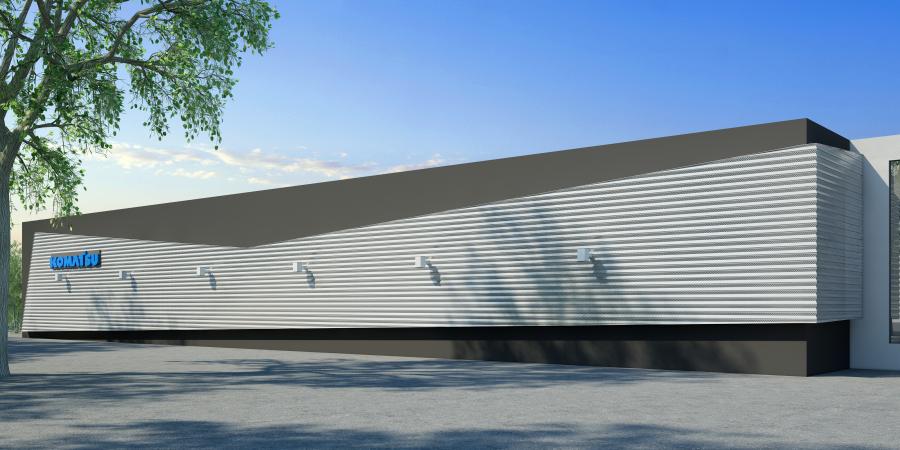 The new facility will be built from the existing structure at 6101 Pan American Way.

Komatsu Southwest (KSW) is expected to break ground in May [2017] on a complete remodel of its new 55,000 sq.-ft. headquarters in Albuquerque, N.M.

The new facility will be built from the existing structure at 6101 Pan American Way. The current building, which sits on 10 acres, has housed Komatsu Southwest since October 2016, when it purchased the Albuquerque location and three other branches of Road Machinery.

Completion is expected in mid-August 2017.

The new dealership is a wholly owned subsidiary of Komatsu America Corp. and also has branches in Farmington and Carlsbad, N.M., and El Paso, Texas.

Grant Adams was named president of the newly formed company and will oversee the dealerships' planned growth in New Mexico and West Texas. KSW recently completed the purchase of the property, which had previously been leased.

“The purchase of the property really demonstrates the commitment Komatsu has to this market,” he said.

Adams's experience with Komatsu is extensive, having started as in intern at the company's corporate office after college and later holding sales and management positions with Linder Industrial Machinery and Tractor and Equipment Company in Florida and Alabama, respectively.

Some of Adams's strategic changes have already begun to take shape, most notably in the area of personnel. In just a few months, the service staff has been expanded by 13 technicians, and three product support people have been added. Four salespeople have also been hired. “All staffing increases are designed to better support our existing and new customers,” he said.

Randy Agee, who brings significant experience with Volvo and John Deere, has been named general manager of product support.

Customers also will notice a significant influx of machinery in KSW's yard. The rental fleet has tripled in size, while overall inventory has grown to $35 million.

Parts inventory has more than doubled, lowering delivery time for Komatsu customers, and more than $500,000 has been invested in tooling, including a new, state-of-the-art hydraulic press.

So far, results have been impressive: monthly rental revenue has quadrupled. Service revenue has doubled, and equipment sales are higher than original projections.

“We hope to form a true, lasting partnership with our customers to help them succeed,” Adams said of the company's long-term plans, while noting the diverse markets that will drive success of each their branch locations.

“The Albuquerque market is driven by government spending, housing starts, road building and aggregate producers. Oil and Gas drive the Carlsbad region, and those segments are back on the rise,” he added. “It is natural gas in Northern New Mexico [Farmington] while in El Paso housing starts are very strong as is commercial construction and road building.”

Komatsu Southwest services all makes and models of new and used equipment.