Kosciuszko Bridge on Budget and on Time 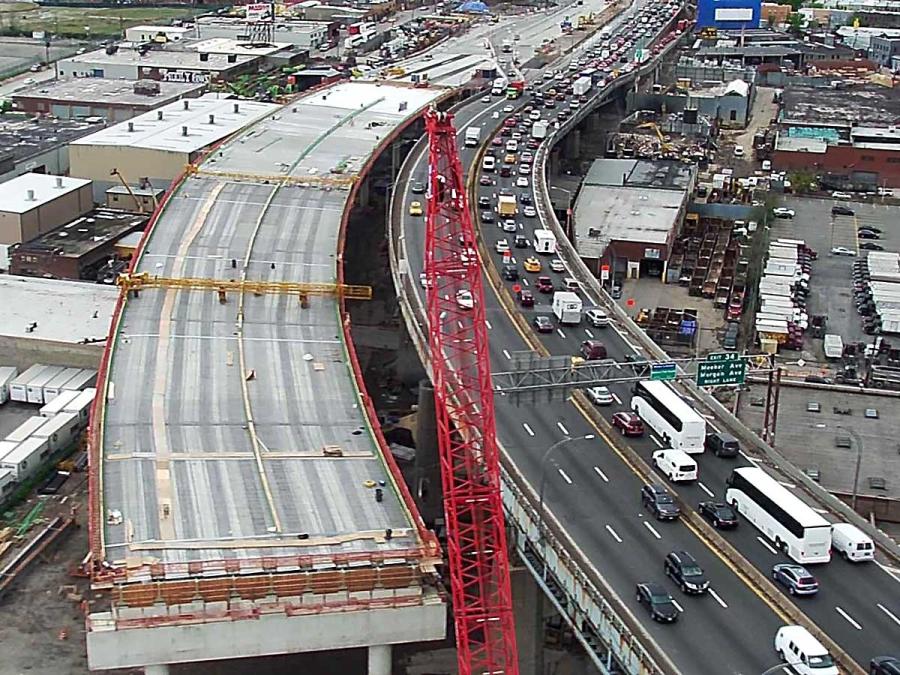 The 77-year-old bridge is in rough shape. Every day, more than 160,000 cars and trucks travel across its broken asphalt and exposed steel decking, over a steep archway.

The largest single contract in New York State Department of Transportation (DOT) history — the Kosciuszko Bridge that links the Brooklyn and Queens waterfronts — is on budget and on time.

A sum of $555 million has been allocated for the first phase, which involved removing the old span and constructing the first replacement. The second phase construction of the twin span carries a price tag of between $250 to $300 million.

The 77-year-old bridge is in rough shape. Every day, more than 160,000 cars and trucks travel across its broken asphalt and exposed steel decking, over a steep archway that, at its apex, rises 125 ft. (38 m) above Newtown Creek below. Daily congestion in both directions is massive. A minor accident or a breakdown can grind traffic to a crawl.

Like so much of America's aging highway infrastructure, the Kosciuszko Bridge is the product of a bygone era. When the bridge opened in 1939, highway lanes had yet to be set to the now-standard width of 12 ft. (3.7 m). Road shoulders weren't compulsory and tall naval vessels regularly sailed up and down Newton Creek, requiring a steep approach from the highways on either side of the waterway to the bridge's center section.

Times have changed and so have the requirements for a bridge across Newtown Creek. Tens of thousands of overloaded trucks cross the bridge's steep grade every day. They stumble over the rough patchwork of repaired asphalt and struggle to regain highway speeds after traffic unavoidably slows. The Newton Creek Naval Yard, once home to rows of warships, has shifted to commercial uses, like production studios and commercial farms. Because the tall bridge is no longer necessary, the new span will sit 35 ft. (10.6 m) lower.

Fortunately, DOT is well on its way toward replacing the antiquated steel truss. Not just with another single bridge but with a conjoined twin span.

Construction of the new Queens-bound Kosciuszko Bridge is continuing at a fast and steady pace. It's anticipated that traffic in both directions will be driving on the new bridge early next year.

The Queens-bound first-phase roadway features five 12-ft.-wide lanes that includes shoulders. Those lanes will be supporting traffic in both directions while the second span is under construction. The 275-ft. (84 m)-tall “H”-shaped towers for the main span — the section of the bridge that crosses Newtown Creek — are complete and can be seen from across the East River in Manhattan. The steel girders for the main span's new roadway deck and the cable stays that will attach the roadway to the towers are being installed.

The sections of the bridge in Brooklyn and Queens that lead to the main span (the approaches) are nearing completion. Construction is ongoing on the Brooklyn and Queens segments that will connect the existing Brooklyn-Queens Expressway (BQE) to the new one.

The Brooklyn-bound second-phase roadway will consist of four traffic lanes, a shoulder and a 20-ft. (6 m)-wide boulevard for cyclists and pedestrians. The new two-lane entrance ramp to the BQE at Vandervoort and Meeker Avenues has opened to traffic. Traffic has been shifted to allow for partial removal of the existing concrete ramp structure along westbound and eastbound Meeker Avenue.

The majestic new cable-stayed Kosciuszko Bridge will transform the skyline between Brooklyn and Queens. It also will feature wider travel lanes, standard shoulders and a reduced roadway incline to allow trucks to maintain a consistent speed on the bridge. New parks and open spaces in the local communities and improved waterfront access also will be part of the project.

In order to create jobs and spur economic development while rebuilding the state's infrastructure, the project is allocating $77 million for small businesses as part of the Disadvantaged Business Enterprise (DBE) Program. Currently, there are signed contracts totaling $76 million. The contractor is also promoting local business expenditures for a variety of services, such as construction supplies, equipment rentals, cleaning services, office supplies and food services. More than $27 million has already been spent on local businesses in Brooklyn and Queens. -CEG

• The main span's stay cables are comprised of roughly 188.6 miles of steel strands. That's enough to circle the perimeter of the borough of Manhattan six times!

• One hundred and fifty-four concrete girders were installed for the new approaches in Brooklyn and Queens. Each weighed between 106,000 and 130,000 lbs. for a total weight of 9,545 tons. That's equivalent to the weight of about 224 subway cars.

• The Kosciuszko Bridge was constructed in 1939 with two pedestrian walkways that were eliminated in 1966 so the original roadway could be widened to accommodate additional travel lanes.

• This is the first cable stayed bridge in New York City.