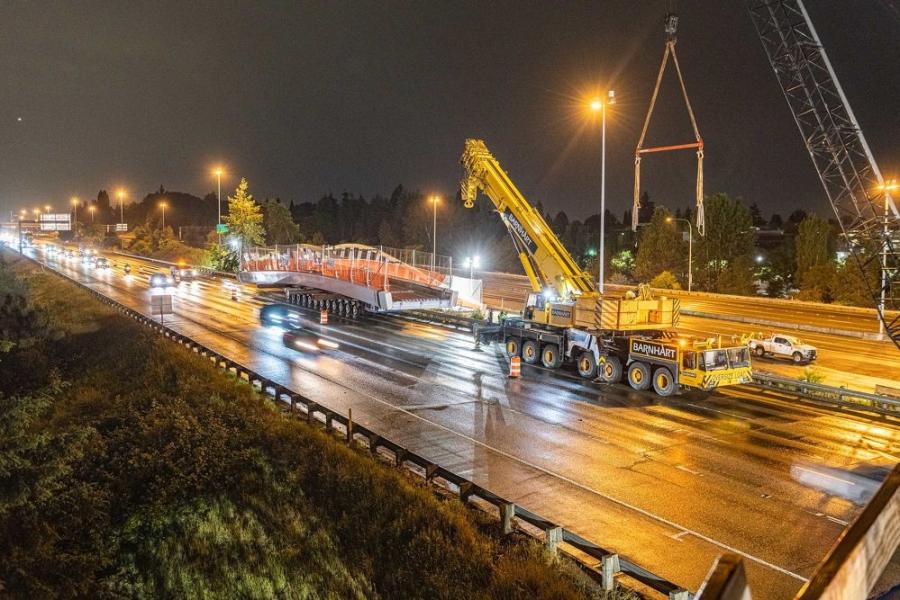 The bridge project is funded by the nine-year, $930 million Levy to Move Seattle, approved by voters in 2015.

Crews with Kraemer North America general contractor recently set the final two of 16 steel spans on a $56 million project to create a pedestrian-bicycle bridge over I-5 in the north Seattle neighborhood of Northgate. 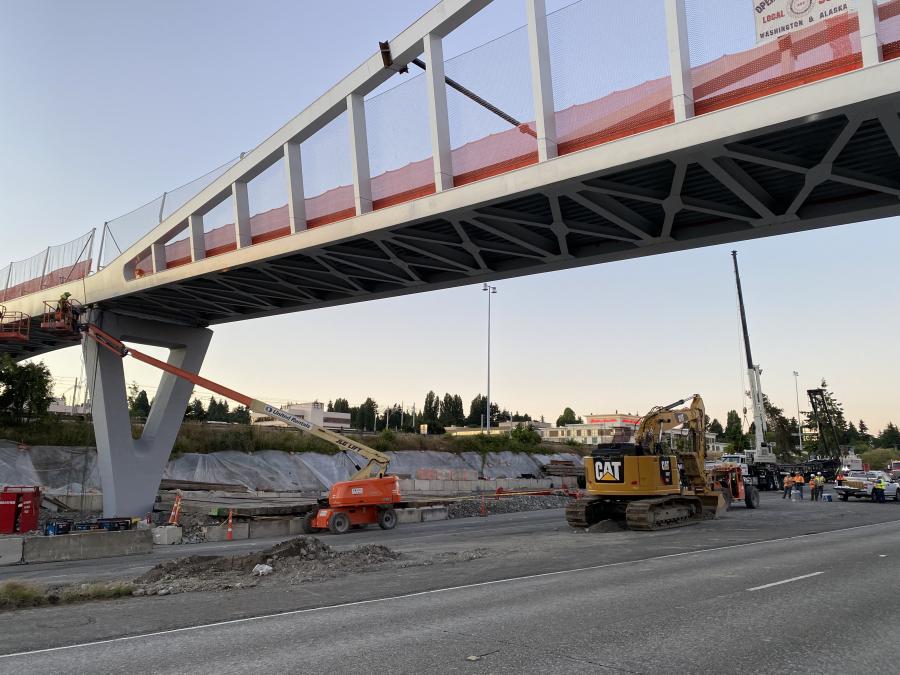 The bridge project is funded by the nine-year, $930 million Levy to Move Seattle, approved by voters in 2015.

"The massive western bridge span weighs more than 400,000 pounds and now stretches over both the southbound and express lanes of I-5 just south of NE Northgate Way," said Darrell Bulmer, spokesman of Seattle Department of Transportation [SDOT]. "It connects to the 200,000-pound eastern bridge segment installed above the northbound lanes of I-5 and to ramps built last year.

"For trivia buffs, 400,000 pounds is twice the weight of a Argentinosaurus [the largest dinosaur ever discovered], or the equivalent weight of 56 Asian elephants, 30 T-rexes, or three 737 jets."

The Northgate Pedestrian and Bicycle Bridge is 1,900 ft. in length and spans 10 lanes of I-5 in the Northgate neighborhood. The 125-ft. span above the northbound lane was installed over a weekend in June; the 234-ft. span over the southbound lane was set the following weekend. The installation of the steel spans required the closure of I-5 on two separate occasions. The stretch of Interstate sees approxiately 220,000 vehicles daily in both directions, making the closures one of the biggest challenges of the job.

"We were allowed to shut down I-5 for only 4.5 hours in each direction," said Eric Strauch, SDOT project manager. "The two spans were fabricated off-site in Tacoma. The span over the northbound lanes was able to be transported as one unit out of Tacoma. The bigger southbound span was assembled in Tacoma, cut into four pieces and transported to the site."

Crews assembled that span in the median between I-5 northbound and the Express Lanes, where a wide flat shoulder served as the staging area. The contractractor opted to fabricate the span offsite then cut it into pieces in order to meet legal load requirements, according to Strauch. 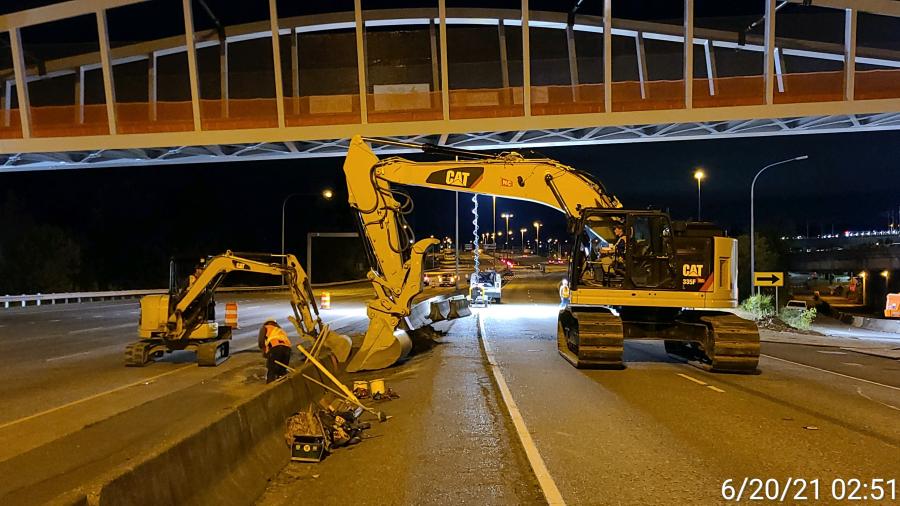 "When you look at it, the bridge is complicated with curves and angles," he said. "It would have been very difficult to construct on site. So the contractor did the full fabrication in Tacoma and provided us with a superior product."

The spans were moved into place by remotely controlled, self-propelled transporters, then lifted by a 650-ton mobile crane. A 500-ton mobile crane and 350-ton crawler crane were also used on the job.

The two steel spans were fabricated at Jesse Engineering in Tacoma.

"Those were our final two spans to put in place," said Strauch. "There is still a lot of electrical and handrail work. Our goal is to have it open by October 2."

Nine other spans feature concrete girders and were fabricated at Concrete Tech, also in Tacoma. Four other spans were cast in place, said Bulmer.

"This became part of a project to connect neighborhood biking/walking facilities," Bulmer said. "It not only connects two communities, but also brings together networks for biking and walking as they intersect with other modes of transportation, such as light rail or buses."

The Northgate neighborhood is a major residential and employment destination that continues to grow, and with the completion of Sound Transit's Link light rail station in 2021, is poised to become one of the region's most active transit hubs. 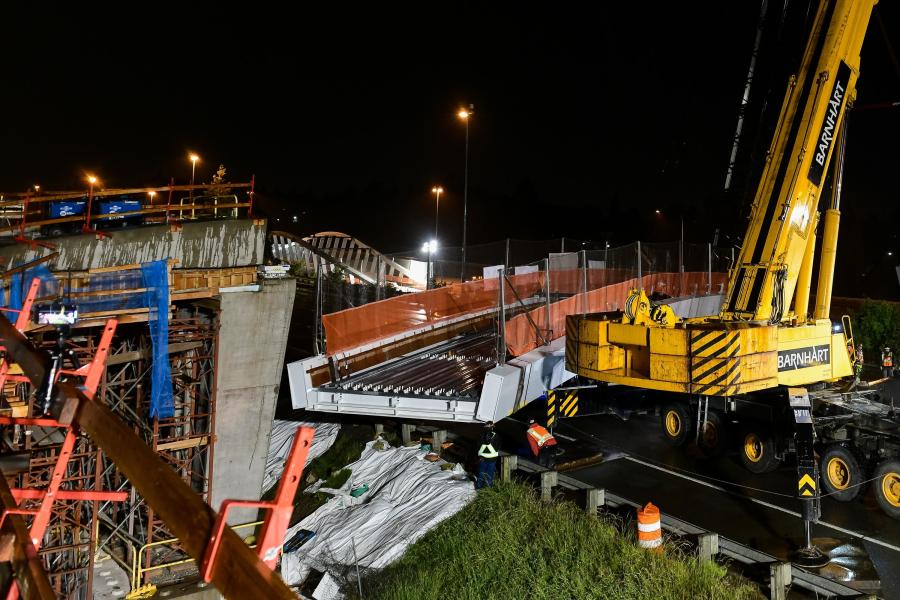 Currently, this stretch of I-5 divides the neighborhood, making travel on foot or bicycle from one side to the other a journey of at least 25 minutes.

"The Northgate Pedestrian/Bike Bridge will improve access to communities, services and opportunities on the east and west sides of I-5 in Northgate and Licton Springs, helping knit together a historically divided area," according to the project website. "It'll also reduces travel time for people walking and biking between the east and west sides of I-5. When complete, the bridge will help connect the neighborhood's thriving job and retail centers with the rest of the city and region.

The new bridge lands at North Seattle College on the west side and at 1st Ave. NE and NE 100th St., near the future light rail station, on the east side.

The bridge also complies with 2010 ADA Standards and includes: