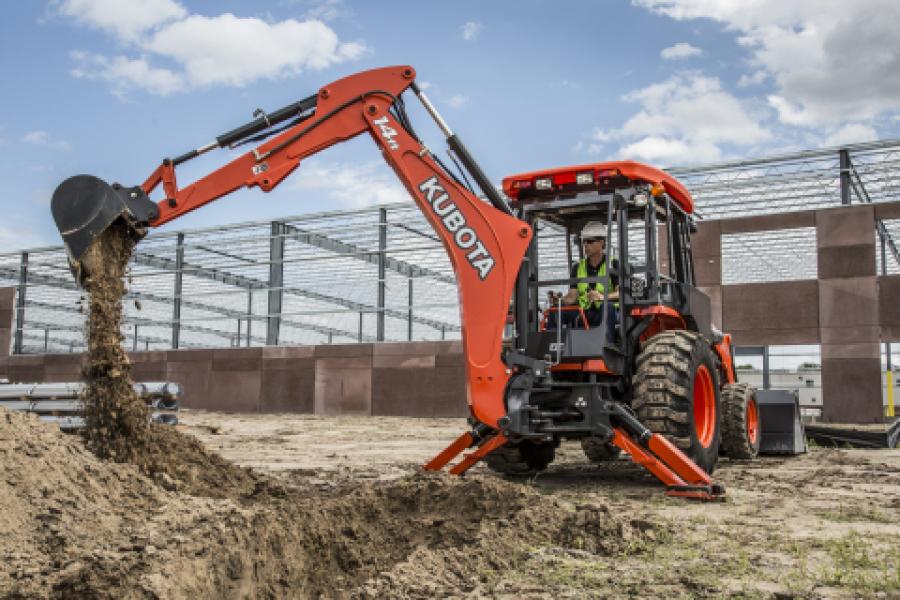 Kubota Tractor Corporation, unveiled two new models, the L47 and M62 TLBs. The new TLBs replace the L39, L45 and M59 in the Kubota product line. Both units will join Kubota's popular B26 to round out its TLB line.

Kubota's new TLBs feature true workhorse capabilities with essentially three machines in one, capable of performing front loader, backhoe and tractor work, and supported by an integrated main frame for increased durability. Both the L47 and the M62 can perform front loading, rear excavating, and other implement tasks, such as a pallet fork or a box blade, via either a mechanical two-lever quick coupler or an optional hydraulic quick coupler. With the hydraulic coupler, the operator needs only to press two dashboard buttons to release the levers securing the front implement. After backing away and proceeding to the next attachment, pressing the buttons again re-engages the levers and secures the new implement. Because the operator does not need to exit the machine, the easy attachment feature proves value when working in inclement weather, as well as being an overall time-saver on the job site.

Additionally, the backhoe's quick coupler allows for easy switching of Kubota excavator buckets, and a four-point rear quick-mount system allows for easy detachment of the backhoe when it's not needed. Even more work duties can be handled with the aid of an independent PTO that enables the TLBs to get even more work done by attaching a wide range of PTO-driven implements, including rotary tillers, snow blowers and rear-mounted mowers — and because the PTO is hydraulic-independent, operators can engage and disengage without stopping the tractor.

Along with a productive front loader and powerful tractor, the M62 TLBs features highly efficient backhoes that dig deeper and reach farther than previous models. What's more, the new models now feature the ability to utilize certain Kubota mini-excavator buckets, which can provide for more versatility on the job site. Kubota's L47 boasts a 10-ft. (3 m) digging depth and a bucket digging force of 5,825 lbs.

The M62 offers contractors even greater excavating ability than its predecessors, with a 14-ft. (4.2 m) digging depth, a 17-percent improvement over the previous generation's 12-ft. (3.6 m) max depth. The M62 has a bucket digging force of 6,572 lbs.

On both TLB models, a lever-engaged backhoe crawling mode allows the operator to slowly creep forward or backward while remaining at the backhoe controls, saving time and enabling more sure-footed operation such as when working alongside a trench.

The L47 and M62 are powered by turbocharged four-cylinder diesel engines that use a common-rail direct injection system, which, along with exhaust gas recirculation (EGR) and diesel particulate filters (DPF), enable compliance with Tier IV Final emissions regulations. In addition, both engines are more powerful than their predecessors; the L47's engine produces a rated 47.1 gross hp, while the M62 produces a rated 63 gross hp. The L47 and M62 are equipped with a much larger 17.7-gal. (67 L) fuel tank — that's boasting up to 48 percent more fuel capacity than those of the previous TLBs, allowing both new models to work longer, with less downtime required to refuel, according to the manufacturer.

The L47 and M62 host a number of interior upgrades that are aimed at increasing functionality and optimizing operator comfort. In both models the clutch pedal has been eliminated, thereby allowing the brake pedal to be relocated to the left side of the cab, reducing interior clutter and simplifying driver operation. Foot space on the backhoe platform has been increased 27 percent over the previous models, providing the operator with a roomier work area. A new throttle-up switch increases engine rpm while holding vehicle speed steady for those times when extra power is required for front loader work but vehicle speed needs to remain constant, and the electronic throttle lever and PTO switch require less physical effort to engage than older mechanical controls.