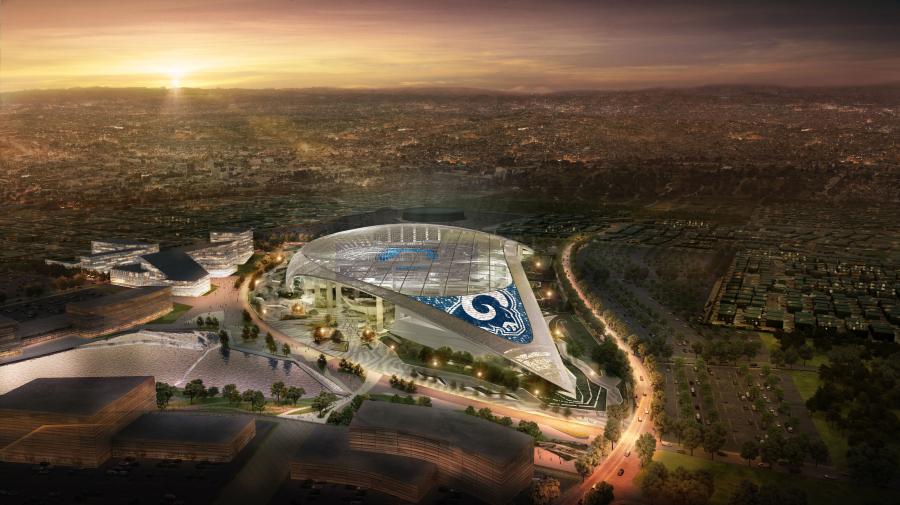 This stadium project is widely thought to be the most complicated and most expensive in sports history, and the main 70,240-seat arena is on track to open in the summer of 2020.

INGLEWOOD, CALIF. (AP) After Jared Goff tipped back his hard hat and swung his arm a few times to get loose, he grabbed a football and tossed a high-arching spiral straight into the arms of an excited construction worker on an upper deck.

Although the multibillion-dollar new home of the Rams and Chargers is currently a dusty construction site with a whirlwind of activity, Goff and his teammates feel confident it will be well worth the wait after getting their first tour on June 14.

“Even flying over it, you can't truly understand how big it's going to be until you get down here and look at it,” Goff said, gazing wide-eyed from the future playing field way up to the top reaches of the arena. “It's exciting. You hope the years go by fast.”

Rams coach Sean McVay canceled the final practice of the defending NFC West champions' mandatory minicamp and loaded his players and assistants onto buses for a drive from Thousand Oaks to Inglewood.

In safety vests and personalized blue hard hats complete with Rams horns, they got an up-close look at the progress on owner Stan Kroenke's stadium project, now a steel-and-concrete shell rising out of a massive hole dug at ground level on the former site of the Hollywood Park racetrack.

This stadium project is widely thought to be the most complicated and most expensive in sports history, and the main 70,240-seat arena is on track to open in the summer of 2020. When the surrounding complex eventually opens its shops, office buildings and innumerable additional features, the Rams and Chargers will be working in a new Los Angeles-area landmark.

“It's amazing to see all the great work that they're putting in for us to come out here and hopefully have lots of success and wins in the years to come,” said Ndamukong Suh, the Rams' new defensive tackle.

“Ultimate respect for all the hard work that's going in at this stage. I can imagine how much hard work and organization the GCs [general contractors] have to deal with. More power to them.”

Suh was a construction management major at Nebraska, so he took a particular interest in the staggering number of workers and companies combining their efforts to complete the labyrinthine project in time for its two teams to play the 2020 season.

The stadium also will host Super Bowl LVI on Feb. 6, 2022, and college football's national championship playoff game in January 2023. The stadium intends to bid heavily for the next available Super Bowl as well, pursuing the game for 2026 or 2027.

Other events arriving in the next decade alone include expected matches for the 2026 World Cup and the opening ceremony at the 2028 Olympics. The stadium has a clear roof in sunny Southern California partly because of its intention to host a men's Final Four, which hasn't been held in California since 1975.

But the stadium's main tenants are Los Angeles' two NFL teams, and they can already sense a brewing home-field advantage in this remarkable setting.

“The roar is definitely going to be insane,” Suh said. “I look forward to it. We're 100 feet deep in the ground, so all the concrete, the steel and even the natural earth will keep everything boxed in.”