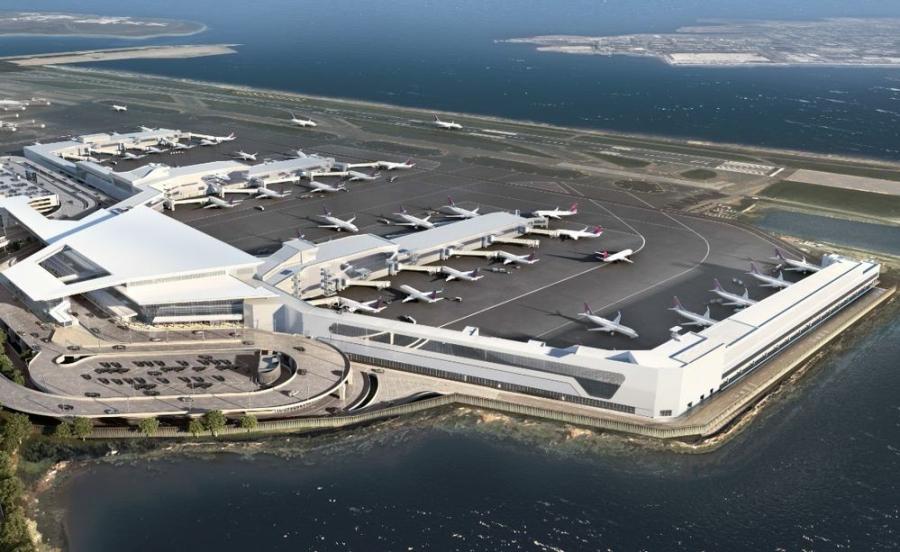 To date, Delta’s construction features 2,000 tons of steel; more than 50,000 cu. yds. of concrete; and more than 40 mi. of piping, cabling and other infrastructure. (Office of the Governor of New York rendering)

Gov. Andrew M. Cuomo announced the first of four concourses that will comprise Delta's new state-of-the-art terminal at LaGuardia Airport is on track to open this fall, a major milestone in the $8 billion construction of a whole new LaGuardia Airport. The spacious new 105,000-sq.-ft. concourse will feature floor-to-ceiling views of Citi Field and Flushing Bay, gates that can accommodate a wide range of aircraft, and dining options from favorite New York chefs and eateries.

"This new milestone in LaGuardia's transformation brings us another step closer in converting the airport into a world-class flight hub in line with New York standards," Cuomo said. "Our collaboration with Delta in the development of this concourse and the new LaGuardia terminal is another demonstration of the effectiveness of public-private partnerships at work to modernize our state's infrastructure."

"The transformation of LaGuardia Airport is part of New York's bold efforts to modernize our airports and improve the travel experience," said Lt. Gov. Kathy Hochul. "The new Delta concourses at LaGuardia will bring additional dining and retail options, highlighting many local products New York has to offer. The overall renovation of the airport will turn it into a twenty-first-century transportation hub for travelers, continuing to grow the economy and tourism industry." 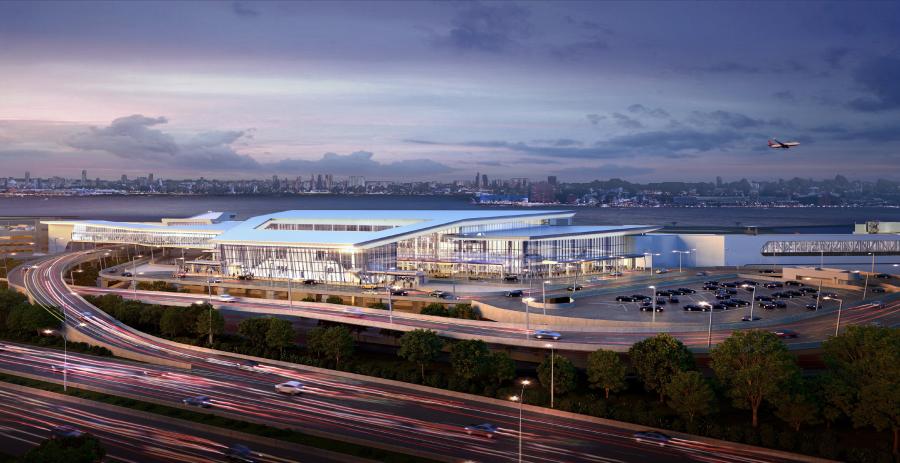 The opening of Delta's first new gates represents another step forward in the multi-phase construction plan — announced by Cuomo in 2015 — to enable LaGuardia Airport to remain fully operational while the entire airport undergoes this complete redevelopment. When complete, LaGuardia — which services 30 million passengers each year — will be the nation's first entirely new airport in 25 years. Under the governor's plan, old facilities are being demolished only as new facilities are completed, ensuring the airport never loses capacity. To date, Delta's construction features 2,000 tons of steel; more than 50,000 cu. yds. of concrete; and more than 40 mi. of piping, cabling and other infrastructure.

The new airport will comprise $8 billion in new facilities, including the $4 billion Terminal B redevelopment which will replace the outdated terminal which opened more than 50 years ago. Terminal B's first 18-gate new concourse opened last December featuring floor to ceiling windows; an indoor park with benches and landscaping; and modern restrooms.

Delta's $4 billion construction project at Terminals C and D began in 2017 and upon completion, Delta will replace the two outmoded terminals with one combined, state-of-the-art Terminal C. Delta is privately financing 80 percent of the redevelopment's costs, with the Port Authority of New York & New Jersey committing the remainder.

The first new concourse opening this fall will feature chef-driven dining options and authentic local flavors from hospitality group OTG, which was selected by Delta after a competitive bidding process. Chef Mark Iacono of Brooklyn's Lucali consulted on Rossi Pizzeria, a Neapolitan-style pizza and calzone concept. Chefs Jess Shadbolt and Clare de Boer of King Restaurant in SoHo consulted on Flatiron Tavern & Provisions, a contemporary tavern that will feature chops, burgers and fresh fish. OTG also will be introducing New York favorites Birch Coffee, H&H Bagels and Juice Press. To ensure dining offerings are providing options to passengers throughout the day, the H&H Bagels outpost — available in the morning — will transition to Rossi Pizzeria in the afternoon and evening. Each of the full-service concepts will place power outlets and USB ports at every seat, along with tablets allowing customers to track their flight, browse the web, play games and order food, drinks and amenities.

Meanwhile, Stellar Partners Inc., a wholly-owned subsidiary of HMSHost, will design retail options for the new facility that provide a wide selection of travel essentials. 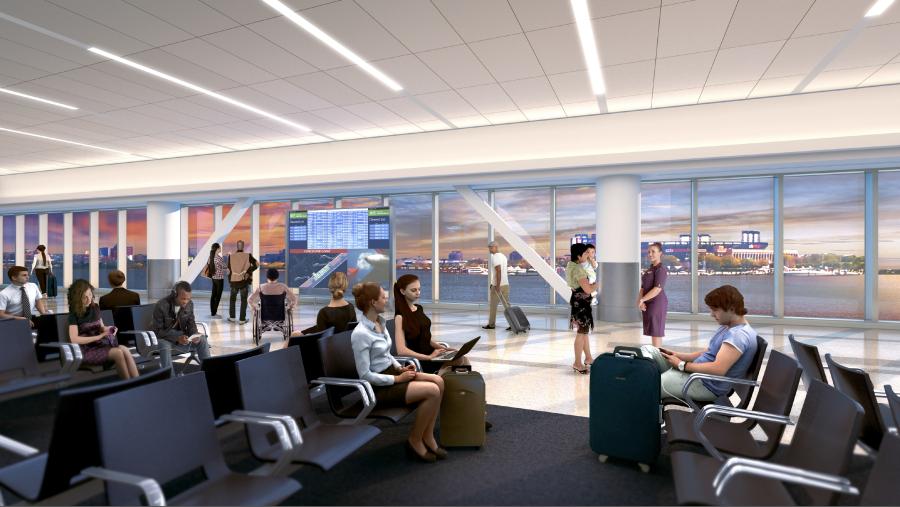 As final preparations continue for the opening of the new concourse, Delta teams recently installed passenger boarding bridges at the gates and energized the facility with permanent power. They've also been paving the aircraft ramp areas, testing building systems, and constructing the temporary pedestrian walkway that will connect the new concourse to Delta's existing Terminal D. The security checkpoint in Terminal D will expand to support both concourses until the centralized check-in lobby opens in late 2021.

As part of this unprecedented project, Cuomo set a goal of increasing the number of LaGuardia Airport contracts with certified minority and women-owned businesses (MWBE) to 30 percent, the highest such goal in the nation. Delta has made meeting this goal a priority and 35 percent of contracts to date are currently with MWBEs.

The new facility features a 12-megawatt Con Edison substation, which is integrated into the upper level of the concourse, providing power for the new terminal. Additionally, all major electrical and mechanical equipment is housed on the upper level to protect such systems from water damage in the event of a major storm. The concourse also features an ice-generation system that reduces electrical consumption at times of peak demand by creating ice at night, when energy demand is lower, and using it to cool the building during the day.

In July 2015, Cuomo unveiled the vision for a comprehensive development of LaGuardia Airport. The $8 billion project, 80 percent of which is funded through private financing and existing passenger fees, will create a unified, twenty-first-century terminal system. It is a complex, multi-phased project, requiring the construction of a new airport on top of an existing one while remaining fully operational. The project includes a new Terminal B on the eastern side of the airport, which will serve Air Canada, American Airlines, Southwest and United; a new Delta Air Lines Terminal C on the western side of the airport, replacing the current Terminals C and D; an improved roadway system; new parking infrastructure, and other associated projects.

"LaGuardia Airport is undergoing this massive redevelopment to ultimately offer travelers a world-class facility that New York deserves, and the opening of Delta's newest concourse at LGA will be an important next step," said Rick Cotton, executive director of The Port Authority of New York and New Jersey. "Governor Cuomo's vision to transform this facility into a state-of-the-art airport is well on its way and we look forward to many more momentous milestones ahead." 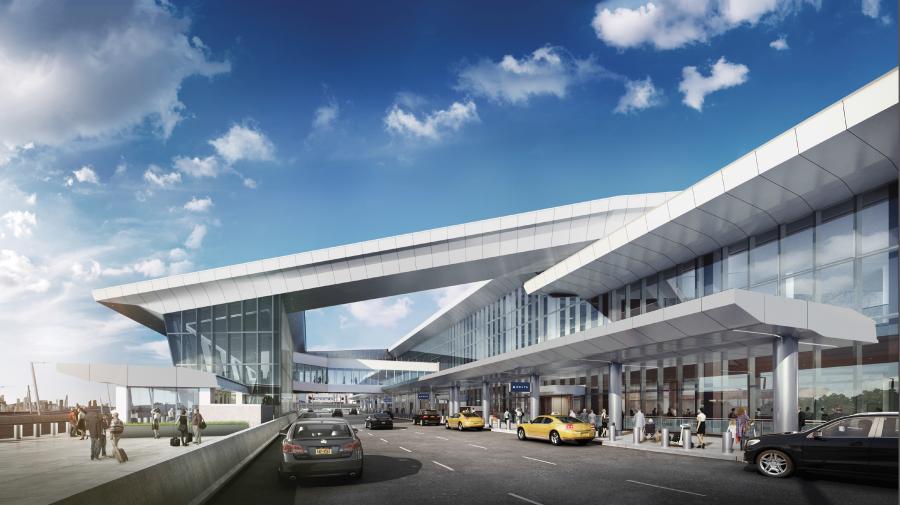 "The historic infrastructure project under way at LaGuardia is a significant component of the more than $12 billion Delta is currently investing in airport redevelopment efforts around the country," said Delta CEO Ed Bastian. "Our customers and employees are excited to see the LaGuardia of the future more fully come into view. Many thanks to everyone who has been working hard to launch an exciting new era for Delta in New York."

"OTG is thrilled to have partnered on such an important project for Delta, its customers and employees, and really the city of New York," said Rick Blatstein, OTG CEO. "The dining options we're introducing at these dynamic concepts reflect the best of what's available in our city, offering Delta's LaGuardia customers the flavors we love and appreciate as New Yorkers."

"We are very pleased to be part of Delta's elevated and differentiated concessions program at LaGuardia Airport," said Padraig Drennan, Stellar president and CEO. "This is truly a visionary program that will change the airport experience for New Yorkers and visitors to the city, and we could not be more excited to partner with Delta in making this vision a reality."