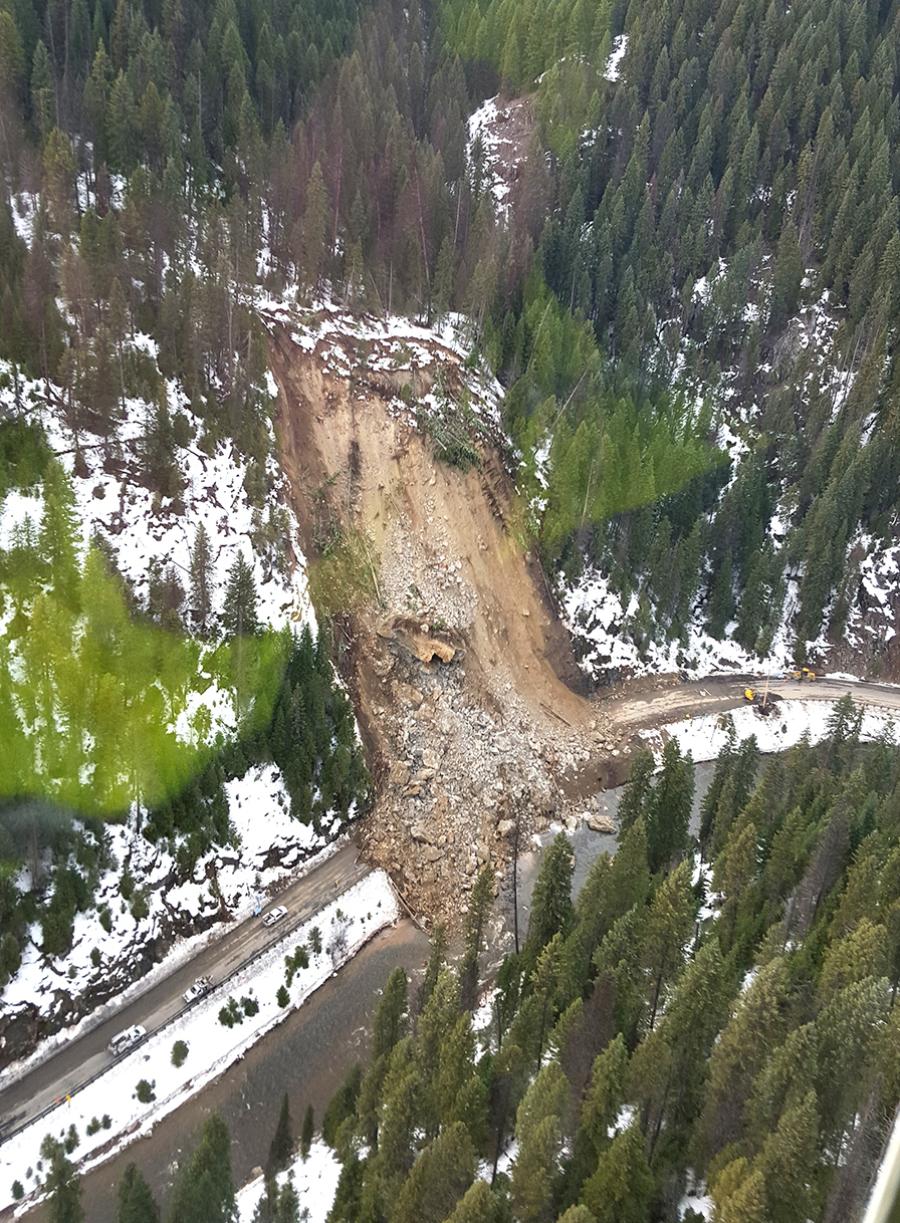 ITD photo. A landslide that closed Idaho State Highway 14 in February has turned out to be more than twice the job anticipated.

“It ended up being much larger than the Idaho Department of Transportation thought,” said Ryan West, vice president of the Spokane-based West Company Inc. “They have since performed geologic evaluations and we're in the realm of 200,000 to 250,000 cu. yds. of material removal. It was contracted at 100,000 cu. yds.”

So far, contractors have removed about 50,000 cu. yds. (38,228 cu m), West said. They stabilize the landslide area, working with Portland, Ore.'s Landslide Technology on slope stabilization means and methods, as they work.

They are currently renegotiating the $1.37 million contract to address the additional work.

The biggest challenge came in the form of a boulder that was the size of a two-story house.

West crews first built a 300-ft. (91.44 m) road to access the boulder, then drilled holes in the top and used explosives to reduce the boulder. The challenge ahead is hauling the volume of material to a permanent dumpsite, West said.

He expects crews will be on site until late summer.

“We have quite the equipment list,” he said. “We have two D8 dozers, two 25-metric ton excavators, one 45-ton excavator, 12 side dump trucks, a D6 waste Caterpillar and multiple support vehicles. I want to say it's going to be mid-August before things are back to normal.”

There is currently safety access with a catchment area.

The slide closed State Highway 14 at milepost 39 on Feb. 18, bringing down 100,000 cu. yds. (76,455.5 cu m) of material, including the house-sized boulder perched precariously 200 ft. (61 m) above the highway, and leaving in its wake massive amounts more that must still be brought down. The highway is the only public road to Elk City and few other small towns and left residents facing a 20-mi. (32 km) detour until they could build safe access.

“The challenges are, first of all, the extremely steep terrain that we are working in,” Coulter said. “The hill adjacent to the highway that gave way is probably a 37-percent slope that extends 600 feet to the top of the slide. There is not only all the material that has come down, but a lot still up there that is real vulnerable.

“Another complication early on was the continuing rain. The ground was saturated, making the slide even more unstable. Even before we could start doing much with it, we had to extend a new road from a forest service road to the top of the slide so contractors could reach the top and push material down. We had a private contractor who had to log off a bunch of loose and threatening timber at the top of the slide. It's a multi-faceted approach and complication.”

Safety also is a big concern, not unlike the environment following an earthquake when severely damaged buildings remain standing, Coulter said.

“It's the opposite approach to building a house. We have to start at the top and move things downhill to attack it that way.”

If the boulder had gone down before crews were able to dynamite it, it likely would have clogged the river. Fortunately, no one was hurt in the slide, but it must have felt like a very close call for some ITD workers.

“Our crews were at the location cleaning up some rock that had fallen earlier in the slide area when the slide came down,” Coulter said. “One crew member was able to get out of the way and capture the slide on video.”

A slide occurred in the same area in the 1980s.