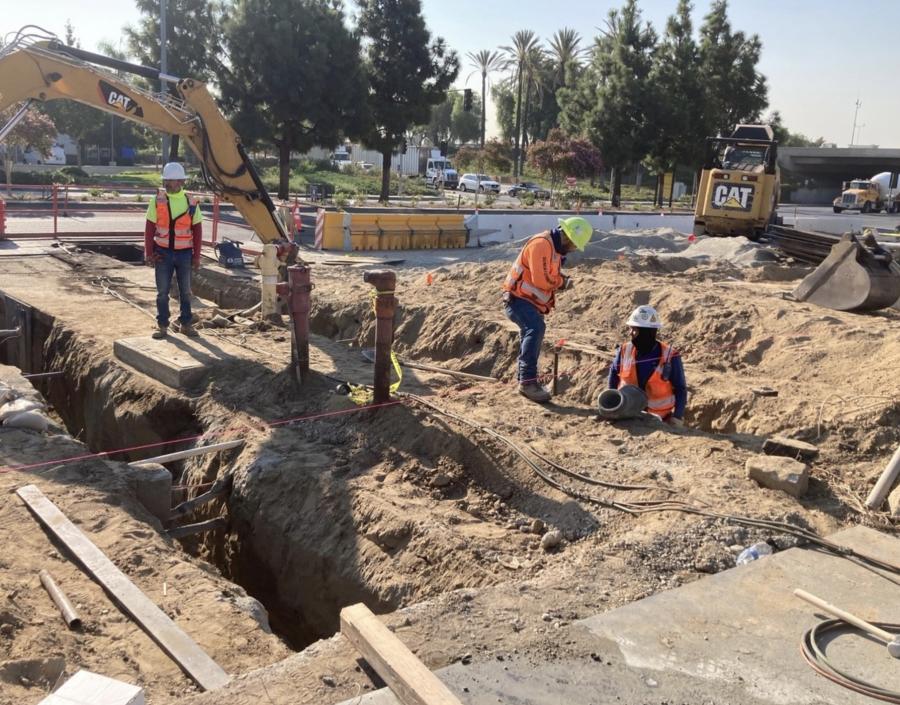 Phase 1 of the San Bernardino County Transportation Authority's (SBCTA) $929.2 million Interstate 10 Corridor Project began in September 2018 and is expected to be completed in early 2024. The work is being conducted by a joint-venture that brings together the Lane Construction Corporation and Security Paving Company Inc.

SBCTA's Interstate 10 Corridor Project is comprised of three phases of improvements to benefit the movement of both people and goods that is important to both San Bernardino County residents and to the local and national economy.

The first phase, stretching 10 mi. from the Los Angeles County line to I-15, is currently under construction. The second phase, stretching 11.1 mi. from I-15 to Pepper Avenue in Colton, is in design and the final funding components are being sought to enable construction to begin in 2024. The third and final future phase of 12 mi. will be from Pepper Avenue to Ford Street in Redlands.

Phase 1, a design-build contract, has a single new lane being constructed and is being combined with the existing HOV lane to provide two tolled express lanes in each direction. Lanes to assist drivers getting on and off the freeway (auxiliary lanes) are being constructed in selected locations, and 18 bridges throughout the corridor will either be replaced, widened or improved to accommodate the widening of the freeway.

In Phase 2, a single toll express lanes will be constructed where there are currently no HOV lanes.

"Traffic phasing to support the construction, while maintaining existing traffic lanes was our biggest hurdle to overcome," said the JV's project's spokesperson. "The lifespan varies depending on the element or part of the infrastructure you are asking about. It is between 25 to 100 years. We're using Caltrans standard design criteria in regard to seismic activity."

The work is immense and JV crews are constructing 11 mi. of two express lanes in each direction of I-10 from the Los Angeles/San Bernardino County line to east of the I-10/I-15 interchange. As far as the 18 bridges, crews are replacing eight, widening eight and improving two. Partial pavement rehabilitation is also being done. 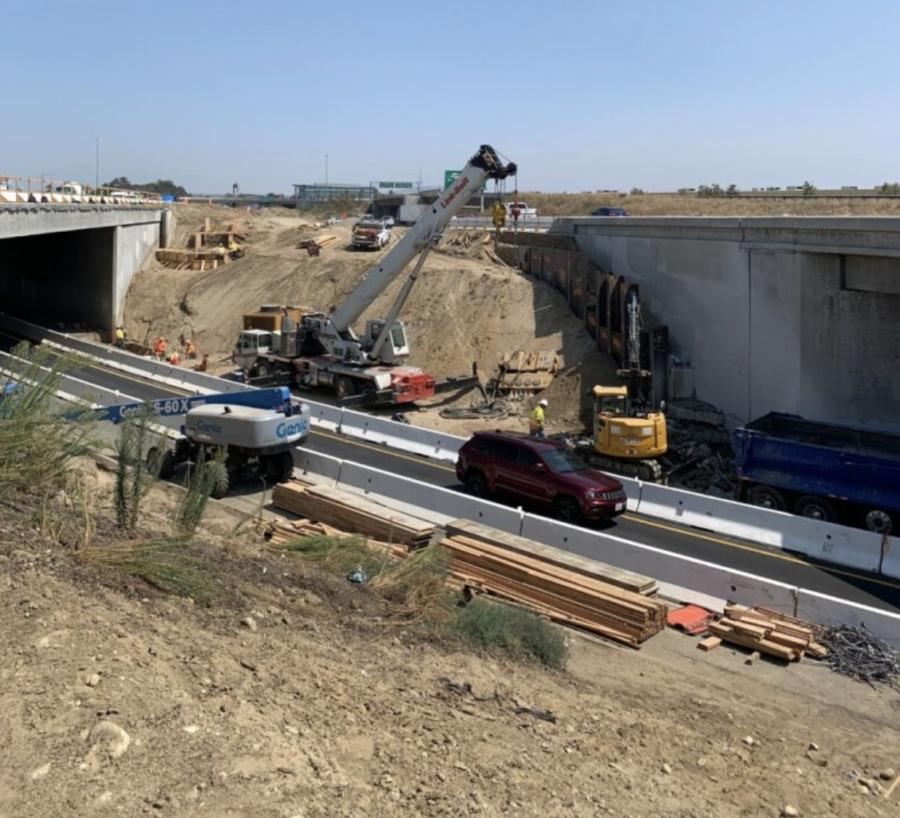 So far, the JV has completed the following: Sultana Avenue Overpass, two Holt Boulevard underpass widenings, the Day Canyon Channel, multiple other bridge phases, multiple walls, ramp reconfigurations and I-10 pavement replacement/widenings all throughout the corridor.

Over the next 12 months, efforts will focus on completing the remaining bridges/bridge phasing, walls and getting to the final stage of the project.

Traffic is a major challenge.

"The travel speed of vehicles through the work zone have led to several incidents to both the traveling public and workforce," said the project spokesperson. "Several modifications and increased police enforcement have been put in place to help slow traffic to construction work zone speeds. Global supply chain constraints, which are still ongoing, have hindered the work. It's a great project team and work force, that continues to put over a million dollars of work in place every day despite the challenges."

The work has crews working both day and night, spread across the full scope of work area and more than three dozen full weekend closures for pavement replacement.

"It's a tight corridor and we are utilizing every square inch of space we can, along with off-site properties to support construction," said the project spokesperson. "Utilities are a constant challenge to maintain and/or relocate during construction. The SBCTA and Caltrans team is co-located to help maximize communications and minimize project impacts."

The bridge construction is pressing forward.

"The work is generally typical construction, but with the tight corridor, the work is split up into multiple phases to maintain traffic," said the project spokesperson. "The constraints that led to the phasing of traffic in conjunction with the widening needs, both wall work and paving, prolongs most of the bridge work, where at times it appears work has come to a halt. The average overcrossing is more than 200 feet and under crossing approximately 50 feet. The lanes above or below vary between two and six."

Crews are working on both ends simultaneously and usually access to the center bent requires a traffic shift for access. Falsework is an essential element for all the bridge construction. The work involves a combination of prefabricated concrete pieces and pour-in-place, with the majority of components being prefabricated.

"Completing a bridge can take a few months to a couple years depending on the bridge and its phasing around other work," said the project spokesperson.

The road work is based on conventional and normal construction practices, based on the multiple phases of work.

"The challenges are phased work to accommodate traffic and lane closure constraints," said the project spokesperson. "We are crushing the existing concrete demo for reuse as backfill where feasible and reusing the excavated soils in backfill areas as well. Stockpiled material is either being reused in later stages or removed from the site. Where feasible, the soils are moved from cuts to fills in the same shift." 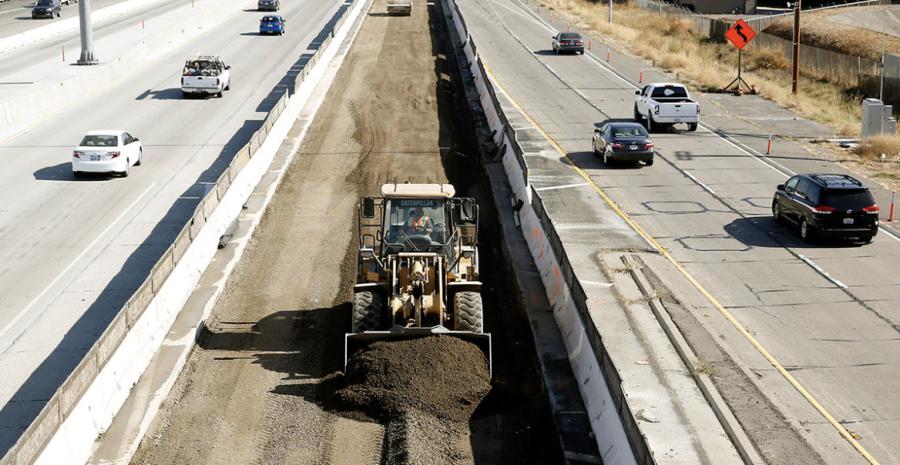 Earthwork crews are pressing forward ahead of the site prep and road installation crews where necessary.

The JV is working on one side of I-10 first and then going to the other to execute the project.

"Where we are not constrained by traffic phasing we are working on both sides," the spokesperson said. "Concrete lanes are being built on the interstate and asphalt lanes on local roads. Some stretches of lanes are done in a 55-hour weekend, while others are done over the course of days, weeks or months depending on the area. The scope to complete full stretches, full width occurs over years/spanning all construction phases."

The dimensions of the roads in terms of subbase, base and concrete are various but generally on the interstate, the existing subbase is reused, with a 3-in. bond breaker and approximately 12-in. of concrete.

"The curing of the concrete varies from 4-to-10 hours to 7-to-28 days depending on the mix used for the different phased work as to when it gets turned back over to traffic," said the project spokesperson. "We are making the concrete onsite."

"Together, these express/managed lanes will open up a new opportunity to provide travel time incentives to transit, shared-ride vehicles and zero-emission vehicles," states the SBCTA. "Phase 2 also will construct three strategic eastbound (EB) auxiliary lanes and one westbound (WB) auxiliary lane to improve truck operations and safety. The I-10/I-15 interchange is ranked the 9th most critical truck bottleneck in the U.S. by the American Transportation Research Institute, and these improvements will help to relieve congestion in the vicinity of that interchange."

The I-10 Corridor serves on average 265,000 daily local, commuter and interstate travelers, and is a critical link within the Inland Empire. It also serves as a major trucking route between Southern California and the rest of the country.

Tim Watkins, chief of legislative and public affairs of SBCTA, stressed the importance of the Phase 1 work. 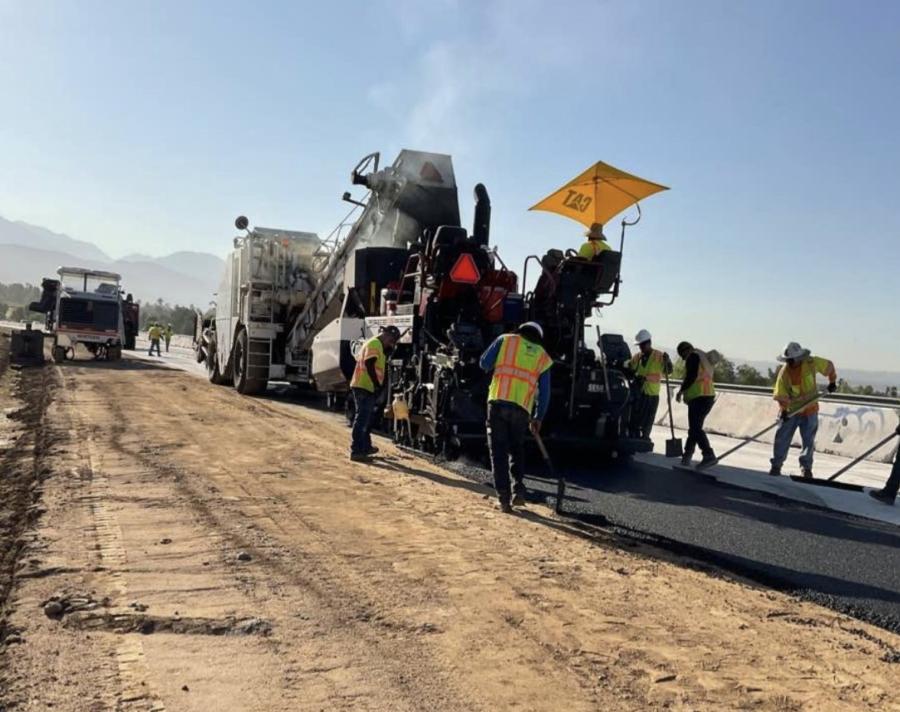 "It will improve travel time within the corridor, relieve congestion and improve traffic flow on the regional transportation system and provide travel time savings and trip reliability for all who use the I-10," he said. "San Bernardino County is expected to grow by more than a half million people — and a quarter million jobs — over the next 25 years. According to the U.S. Department of Transportation, the number of vehicles registered in San Bernardino County will grow by 370,000 during this time, all traveling on virtually the same roads and highways we have today. Growth forecasts in the 2016 RTP/Sustainable Communities Strategy show that for cities along this first phase of the I-10 Corridor Project (Montclair, Ontario, Rancho Cucamonga, and Upland), population will grow by 38 percent between 2012 and 2040, and employment will grow by 54 percent."

Phase 1, stretching from the Los Angeles county line to Interstate 15, is costing $929.2 million in total, with $491.8 million from the federal government, $286.5 million from the state,and $150.9 million from local sources, including Measure I sources. The construction cost is $672.9 million. Watkins added that "a significant portion of the federal and local funding is being recovered by future user fees associated with the new lanes." In addition to constructing the new Express Lanes, the project is also using state resources to rehabilitate the aging concrete in the general purpose lanes throughout the corridor.

Approval of the final environmental document was secured in July 2017 and the Lane Construction/Security Paving Joint Venture secured the design/build contract in August 2018.

The work is having a major impact on traffic and includes ramp closures, traffic shifts and nighttime closures.

"Please be aware and use caution throughout the corridor as workers and heavy equipment are present," said Watkins. "A weekly construction alert is available to inform motorists on how to manage detours and/or closures within the corridor and when and where they will occur. As always, safety for both the motoring public and the men and women working on the project is critically important."

The road work and infrastructure was designed by Michael Baker International as part of the Design Build Contract team. CEG