The event was attended by dozens of federal, state and local dignitaries, as well as area business executives and members of the news media. 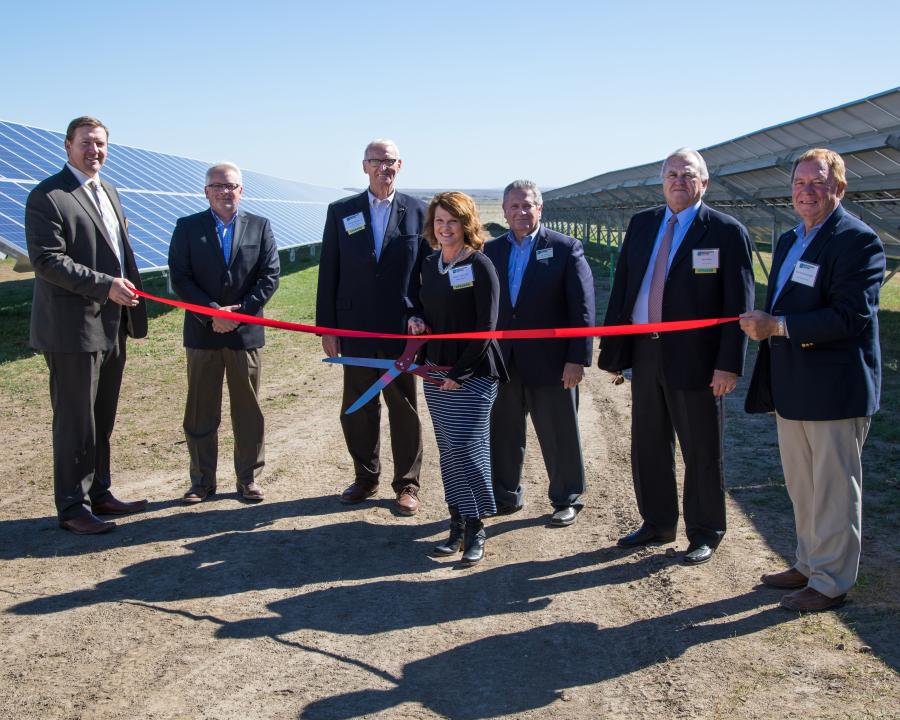 Missouri River Energy Services photo. Officials held a ribbon-cutting ceremony for the $2 million solar farm at the Pierre airport, with a sizable crowd in attendance.

With construction just completed, the largest solar farm in South Dakota has officially started producing electricity. Officials held a ribbon-cutting ceremony for the $2 million solar farm at the Pierre airport, with a sizable crowd in attendance.

“There was a lot of interest and excitement about this project, ” said Jeff Peters, director of federal and distributed power programs, Missouri River Energy Services (MRES).

The event was attended by dozens of federal, state and local dignitaries, as well as area business executives and members of the news media. The project is a joint venture involving the city of Pierre, Geronimo Energy of Minneapolis and Sioux Falls-based Missouri River Energy Services.

Missouri River Energy Services is a member-owned wholesale, not-for-profit provider of energy and energy services to municipal electric systems in Iowa, Minnesota, North Dakota and South Dakota. Peters said MRES has been studying solar power for several years, in an effort to determine its value in its power supply resource mix.

“Earlier this year, we decided that MRES needed to learn more about the actual plant operation of a solar facility, and particularly how it interconnects to and affects a local distribution system. Instead of relying on anecdotal information, we wanted empirical data that applies specifically to our member municipal utilities,” Peters said.

According to Peters, the Pierre Solar project is a utility-scale project, “which means that all of our 60 members will share in a portion of the output of clean, renewable solar power from this project. To our knowledge, Pierre Solar is the first and only utility-scale project in South Dakota. It will produce enough energy to power about 200 homes or one big box store. It's very rewarding for MRES, because it's the first solar project in our power supply portfolio.”

“The Pierre site provided the lowest development cost, primarily due to a couple of factors. The estimated electrical production from the project is high for our area, since the solar potential and the elevation in the Pierre area is favorable. Also, the availability of land owned by the city was a key factor in our decision. The property, located in the northwest corner of the Pierre municipal airport, slopes down to the south, and it is wide open with no shading to any part of the facility.”

The production from the project will be monitored in two different ways, according to Peters.

“The primary concern for MRES as the purchaser of the output of the project is to understand how much electricity is being produced and when it is being produced, as well as understanding the power quality from the facility. MRES will monitor the solar production by utilizing the Advanced Meter Infrastructure system owned by Pierre Municipal Utilities,” said Peters.

Pierre Solar LLC, a subsidiary of Geronimo Energy, will own the project, and Best Power International will operate the facility. They will monitor its operation through an independent internet connection to a monitoring system at the site.

“This technology is starting to become prevalent in our area of the country, and MRES has a lot to learn about how and when these systems operate, how they affect reliability and power quality and how they interact with our member's local distribution systems. It's possible we will see plants of this size being developed by businesses within our membership or by our member utilities themselves. MRES wants to have knowledge and experience with solar technology, so that we can help our members and their customers make good decisions about their investments in solar.

“Second, we wanted to place the project within the service territory of a municipal member where we would not take crop land out of production or employ land that could be used for commercial or residential development. In other words, we were looking for a 'brown field' location.

“The Pierre Solar project will give MRES insights on how to build and interconnect this type of project in similar-sized communities.”

The project will result in 1,932,000 kilowatt-hours annual electric production, featuring five acres of multi-crystalline panels as part of a 30-degree fixed-tilt photovoltaic solar array. Dwight Jelle, who serves as president of Best Power International LLC, managed construction of the project.

“Building a large solar project in an area with very little to no solar provides a challenge in finding experienced people to do the work,” said Jelle. “Also, Pierre has a relatively low unemployment rate, which made finding even temporary laborers difficult.

“With the price of solar energy falling so fast, the marketplace worldwide is relatively busy. Getting suppliers to be responsive was difficult.”

Jelle said in order to carry out the project, teams had to evaluate the site for available sunshine, soil conditions and airport issues involving glare studies. Preliminary due diligence was required, along with engineering and production estimates to determine if the site made good economic sense.

Officials also had to negotiate a power purchase agreement, an interconnect agreement and a lease agreement for the land, in addition to hiring an engineering, procurement, construction contractor and designing the product and procuring equipment at the same time.

“The site was almost perfect for a fixed rack solar project of this time,” said Jelle. “It was relatively flat with a slight slope to the south.”

Jelle said the elements did not prove to be an issue during construction.

The most time-consuming part of the project was the installation of the racking and panels, because of a lack of help.

Equipment used on the project included a post pounder, skid steers, a lull and two mules. The machinery was used to haul materials around the site, set the foundations and racking and place the transformer. Materials used included steel for the racking and foundations, along with solar panels and wiring.

“The panels were 72 cell, 315 watt panels. They each weigh about 68 pounds, and we had 4,284 panels. They were trucked in on semi-trucks and distributed around the site with skid steers,” said Jelle,

According to Laurie Gill, Pierre mayor, the solar farm is important to the area, for a variety of reasons.

“Certainly there is some prestige that comes with being home to the state's largest solar project, but more important, this is step toward renewable energy.”

Gill also said the location is a good fit, in more ways than one.

“I think there are a number of reasons the facility is located in Pierre. Some are the result of the hand Mother Nature dealt us, some relate to Pierre's infrastructure, and equally important was Pierre's appetite for this kind of project.

“It's my understanding that when companies are looking at building out a solar facility, the site has to meet some qualifications regarding elevation, weather patterns and the annual average volume of sun rays. Pierre met the standards on all those accounts. Additionally, we had underutilized land available.”

The facility is located on nine acres of airport property. Federal safety regulations limit how land proximate to an airport can be used.

“The solar facility is a great way to better use airport land, while still working within FAA safety parameters,” Gill said. “The site is also close to one of our electrical substations, making it easier to tie into our electrical distribution system. Also, the city was genuinely excited about the project. We brought a can-do attitude to the effort.”

Gill said the new solar farm could lead to other projects, as well, adding that the significance of the construction can't be overstated. In addition, she said the decision-making process for the city is driven by the values of a specific strategic plan.

“One of those values is taking a proactive leadership approach to move the community forward, rather than reacting to emerging threats or changing times. To that end, I think we have a very strong frame of mind for considering new and different ideas.

“In the electrical industry specifically, Pierre has a strong history of being forward-thinking. Our electrical distribution lines have been underground for decades. This is the direction electrical industry is moving. Previous city leaders had the forethought to make that move generations ago. We have also swapped out older street lights with more efficient LED lights, and have moved to advanced meter reading for both our electrical and water utilities.

“We wouldn't be generating solar energy in Pierre, if it weren't for the leadership, fortitude and dedication of our employees and partners who were involved with the project.”