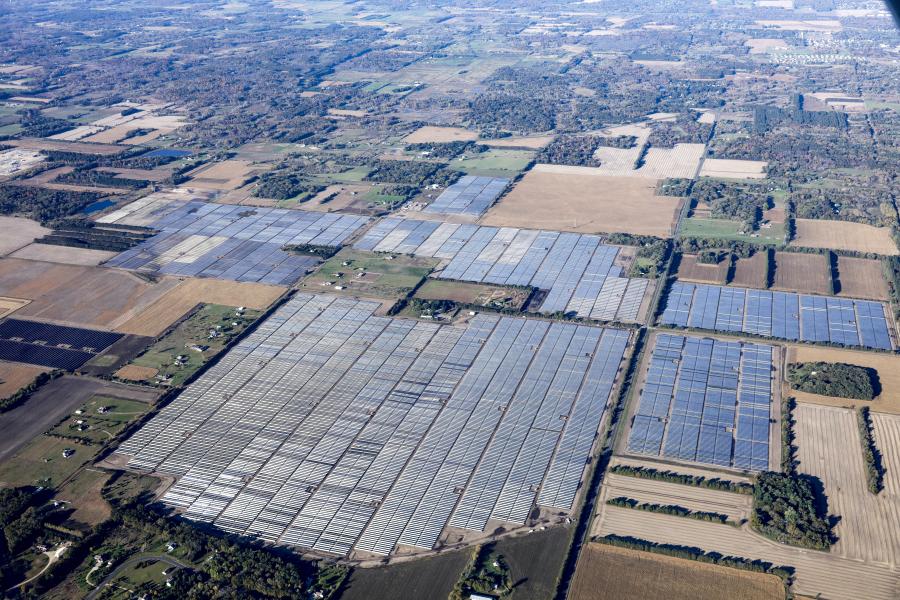 The largest single solar facility in the Midwest is gearing up to deliver clean energy to customers. A ribbon cutting ceremony was recently held in Minnesota to mark the end of construction on the North Star Solar project, which is expected to produce enough energy to power more than 20,000 homes.

Swinerton Renewable Energy built the new facility — one of the biggest in the nation — and employed more than 300 people during the height of construction.

“Physical construction of the site was the most critical aspect of the build, since the site needed to be completed and tested prior to winter weather affecting irradiance levels,” said Brian Hoopes, Swinerton project manager. “With testing still ongoing, we are working to complete all testing prior to the onset of snowfall.

“Coordination with the utility was critical, as they had to construct a new bay in their substation to accept electricity generated by the solar project. They were very on top of their work, though, and had it completed and ready for the site a couple months before it was crucial.”

Expected to come online in December 2016, North Star Solar will generate 100 megawatts of electricity, and is a $180 million investment in Minnesota and Chisago County. The project broke ground in April. The site is still being commissioned and tested to confirm it has been built to the owner's expectations.

“The cold weather climate for the project was a challenge in a couple ways,” said Hoopes. “Due to potential frost heave if an ice lens layer develops, the steel pile foundations for the racking needed to be driven to a minimum of 14.4 foot embedment, which is about twice as deep as a standard foundation embedment. This additional depth provides for more protection against frost heave that can affect the racking alignment.

“The cold weather could also affect the battery storage for the racking motors. If temperatures drop below a certain threshold, the batteries can discharge to keep themselves warm and permanently reduce their capacity and lifespan. To address this, a permanent 24vDC electrical supply was brought in from the skids to each battery to power a resistor that provided the necessary heat to the insulated battery, keeping it above critical temperatures.”

There are a total of 441,612 modules on the site. A consistent 7,000 to 8,000 modules were installed per day by crews on site, composed of mostly local workers.

The panels, roughly 6 by 3 ft. (1.8 by .9 m) and weighing approximately 50 lbs. (22.6 kg) each, arrived in enclosed trucks, palletized and wrapped for protection. They were transported from ports on the east and west coasts.

“This was a three-person activity, with two people lifting up the module on either side and placing it on the clamps that attach it to the racking, with the third person coming behind them to tighten the clamps and confirm proper torque was achieved,” said Hoopes.

“The racking installation typically takes the most time, with many individual pieces to install. Each component needs to be riveted or bolted to the correct spec and in correct alignment to confirm that the racking will track on its axis properly and not bind up or damage itself.”

Hoopes said the soil was very sandy, and was not historically conducive to high-yield agricultural growth, which drove some of the landowner decision making in long-term leases or selling of their properties to provide the needed acreage for constructing the project.

“There was some localized tree removal needed to create the footprint of the solar site, but not a significant amount given the overall amount of land needed for the project. Perimeter trees and existing wind-breaks were kept intact as much as possible for the native and existing vegetation to remain in place. There was a significant amount of seeding that occurred after ground disturbance was completed which involved hundreds of acres of native prairie grasses and pollinator mixes to promote animal, insect and bee populations.”

Hoopes said the impact of the project is far reaching.

“The site employed hundreds of Minnesotans and paid millions of dollars in wages, in addition to millions of dollars paid to local vendors and subcontractors. It's always a great experience to work with talented, local individuals and bring some economic benefit to an area.”

Main equipment used on the job included scrapers and dozers for minor earthwork and the construction of site access roads within the solar arrays. A large trencher was used for digging the trenches where the direct-bury electrical conductors were placed. Roughly 10 pile drivers were on site installing piles for the foundations. Heavy machinery such as JLGs and other forklifts were used for the receiving, staging and installation of the physical components of the site.

Main materials used during construction included steel piles for foundations, single-axis tracker components, PV modules, AC and DC electrical conductors, transformers and inverters for converting DC to AC power from the modules and steeping it up to grid voltage for the off-taker/utility.

NEXTracker supplied single-axis trackers, a combined hardware and software solution for all size solar power plants in front of and behind the meter. Described as the backbone and brains of the solar power plant, the trackers work in concert with the panels to collect energy and inverters taking this energy from DC to AC power that can be fed into a commercial electrical grid or used by a local, off-grid electrical network.

“Solar trackers allow for the power plant to gain an additional 20-25 percent more energy, due to structure's capability to rotate and face the solar panel towards the sun from sunrise to sunset, versus fixed tilt racking and mounting solutions that are much more limited in energy production,” said Ryan Booth, NEXTracker vice president of sales.

Due to Minnesota's chilly climate, the company crafted a specific solution to work for the site and region.

“Solar is viable in colder, snowy climates, and we have the technology in both software and hardware to overcome some of the challenges that colder weather climates and regions face, said Booth.

“With the rise of more Midwest and Northeast solar projects coming online and favorable renewable energy policies in particular Midwest states, we have long had a cold weather solution on our product roadmap.

“As the Midwest continues to expand its solar footprint, the North Star solar power facility serves as a model for the region in both record-breaking size, and its unique wired control system design. This cold weather tracking solution has been replicated on other solar projects in New York, Vermont, Minnesota and in multiple community solar projects in Wisconsin.”

“The challenges of project development are generally pretty consistent. Land acquisition, interconnection and permitting are usually the biggest hurdles. North Star benefited from a receptive community, helpful landowners, a strong point of interconnection and a site that was largely free of environmental constraints.”

Whitney said it's been gratifying to be a part of the effort.

According to Bruce Messelt, administrator of Chisago County, renewable energy, and solar power in particular, is now an affordable nationally-available technology.

“At 100Mgw, North Star Solar represents a major step forward in expanding and diversifying our energy resources and production in the Midwest. This type of development now means that solar power has transitioned from a novel, boutique technology to one that is providing baseline electricity production for thousands of homes and businesses.

“The project is also significant because of the complexity of assembling some 1,000 acres for development, spanning scores of landowners, three local units of government and a state-led regulatory process, as well as intersected by several major roadways and utility corridors. From developer to regulator to contractor to owner/operator to host community, this project demonstrated that amazing synergy of common purpose and vision, leading to an astounding six- month timeline from permitting to completion and commissioning.”

Upon completion, North Star Solar will be contributing some $350,000 annually in production and property taxes to local schools, cities and county. Additionally, officials anticipate a small number of high-paying, full-time jobs associated with operating and maintaining the facility.

“For many, the size of this project is only understood from an aerial photograph. North Star Solar utilizes unique landscaping, ecological-friendly fencing and retained wetlands and homesteads to fully blend in to the larger rural Minnesota environs,” said Messelt.

“What you cannot see are key project elements, such as large woven-wire agricultural fencing to allow small animals uninterrupted habitat, and hundreds of acres of restored native vegetation and pollinator-friendly plantings. In many ways, the North Star Project represents an improvement in land stewardship, from intensive farming of marginal soils to an eco-friendly use of native land for an industrial purpose.”

“Unlike past community conflicts over large industrial developments, a proactive approach to communicating this project's vision and a transparent review and permitting process did much to address, up front, the most legitimate questions and concerns.”

“Chisago County has been fortunate to place itself in a position to benefit from federal and state incentives to promote solar energy production. Our natural assets of affordable and accessible land, proximity to the electrical transmission/distribution grid, and a welcoming green-friendly community were well-matched with proactive partners. Our state and county leaders had the foresight to put in place a balanced regulatory environment which promotes solar energy development while protecting Minnesota's natural beauty and resources.”