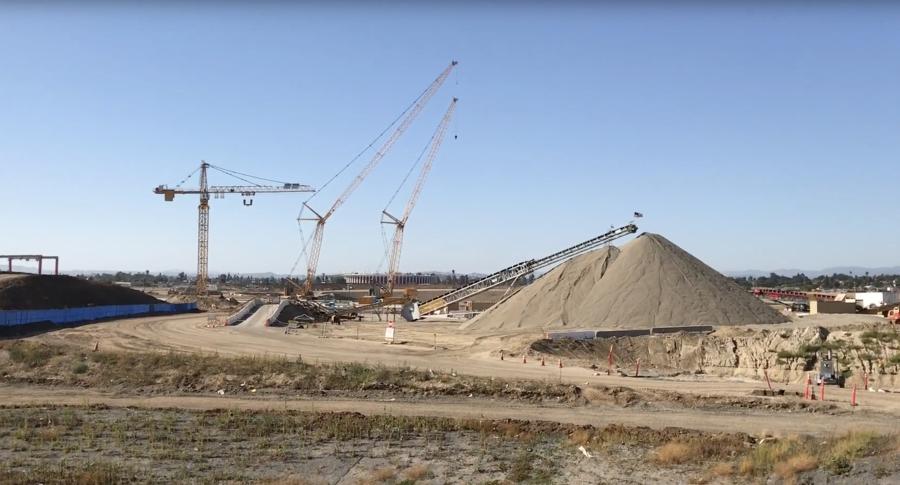 Work has kicked into full gear on a futuristic $2.66 billion football stadium that broke ground in Inglewood in mid-November 2016.

Work has kicked into full gear on a futuristic $2.66 billion football stadium that broke ground in Inglewood in mid-November 2016, but bogged down in mud during a wet Southern California winter. The new stadium will sit on a 298-acre site.

The original construction schedule had the stadium scheduled to open for the 2019 football season, but the muddy conditions forced a one year delay in the opening, which is now set for fall of 2020.

Meanwhile, the Coliseum itself is in the beginning stages of a $270 million renovation. Major construction of The Scholarship Club Tower, including luxury suites and a new press box, is set to begin following the USC Trojans' 2017 football season.

The Rams new Inglewood stadium, called Los Angeles Stadium at Hollywood Park, is designed to seat approximately 70,000 spectators, including 275 luxury suites and 16,000 premium seats. It also will have room for 27,000 standing spectators.

The exact seating number has not been set, said Chris McFadden, vice president of communications for Turner Construction Co., which partnered with AECOM Hunt to build the new stadium.

Turner Construction Co. is based in New York, but has a strong presence in Southern California. AECOM Hunt is an international company based in Los Angeles.

Stadium owners are Kroenke Sports & Entertainment of Denver, and Hollywood Park Land Co. LLC of Inglewood. Legends Global Planning of New York and Los Angeles, was selected to manage the project and Henderson Engineers Inc. of Los Angeles, was chosen as services engineer.

In total, 5 million cu. yds. of dirt will be excavated. Most excavation at the project site has been completed and crews are constructing huge concrete pillars that will support the stadium structure.

Utilities including electrical systems and water pipes also are being installed.

Some of the cranes were so tall that they required Federal Aviation Administration approval for use at the location, just blocks away from the busy Los Angeles International Airport.

In December of last year, the FAA authorized the first of several large cranes to be used in constructing the stadium. The tallest cranes include two Liebherr LR 1300 models, one 195 ft. tall and the other 228 ft. tall.

The FAA determined they won't pose a hazard to air navigation. The giant cranes are used to install pilings for the stadium's foundation.

Stadium Will Expand for Major Concerts

HKS of Dallas has designed the multi-use stadium to accommodate up to 100,000 spectators for concerts that utilize the playing field for floor seating. The stadium, which is being considered as part of the city's 2024 or 2028 Olympic bid, will be the NFL's newest home and the host for Super Bowl LV in 2022.

At 3.1 million sq. ft., the venue will be the league's largest in square feet.

Technologically, the stadium is touted as super high-tech in design and features.

"It has a unique design and concept," McFadden said. "It will be the most technically advanced stadium period."

McFadden would not elaborate on the high-tech features, but the all-weather design, scoreboard, video board and sound system are expected to be ahead of the pack. That will take some doing.

In newer stadiums fans can access in-stadium broadcasts from their iPhones and pull up replays, shot from different camera angles.

In building Levi Stadium, the San Francisco 49ers invested in a 40 gigabit Wi-Fi network. Will the Rams offer an even more powerful system?

Only time will tell.

Structurally, the stadium will feature a giant triangular roof built of metal and supported by thick columns. The metal roof actually wraps around the venue providing partial walls.

Part of the metal roof is left open, but covered by an ethylene tetrafluoroethylene (ETFE) canopy. ETFE is a fluorine-based plastic designed to have high corrosion resistance and strength over a wide temperature range.

The 19-acre transparent canopy will cover the entire stadium and parts of the surrounding development.

The canopy, partial metal roof and open sides provide an open feel while allowing events to be held year-round — including rainy days.

The massive roof also spans across an adjacent outdoor lobby called Champions Plaza to be used as a communal gathering spot for game day spectators.

The stadium itself will be set 80 to 90 ft. into the ground — 10 ft. shallower than originally planned — with approximately 175 ft. above ground.

Because the stadium is located near Los Angeles International Airport, the FFA was concerned the height of the facility could cause problems for aircraft flying in and out of LAX.

So, the stadium was built into the ground, providing a low profile and satisfying FFA requirements. Also, developers will pay $29 million to install a secondary radar system at LAX to alleviate FAA concerns the stadium could interfere with the airport's radar.

Along with the stadium, the project site will include a large urban village with retail, restaurants, a hotel, parks, an artificial lake with waterfalls and 3,000 housing units.

The stadium will be located at the heart of the new City of Champions district, a purpose-built mixed-use, entertainment and leisure neighborhood being constructed on the site of the recently-demolished Hollywood Park fairgrounds.

Game-day traffic is of concern around the development and stadium, so public transportation to and from the new stadium is being considered.

The Los Angeles County Metropolitan Transportation Authority has publicly endorsed the idea of extending existing light rail to the stadium. With that in mind, plans are being developed to provide light rail access to the stadium site.

Contractors estimate the stadium construction will provide more than 3,500 on-site construction jobs in Inglewood and more than 10,000 jobs by the time the facility is completed.

Also, the stadium is expected to heat up the local real estate market.

But initial construction for the project came at a price. Work went smoothly at first. Developers formally broke ground in late 2016 on the stadium after about a year and a half of site preparation and infrastructure work.

Then rain and muddy conditions halted work on the huge project for two months as 2017 got underway. The rain fell at a vital stage of construction when crews were digging the enormous hole the stadium would sit in.

By spring, conditions improved considerably, but the project was already well behind schedule, necessitating a year delay in the stadium opening.