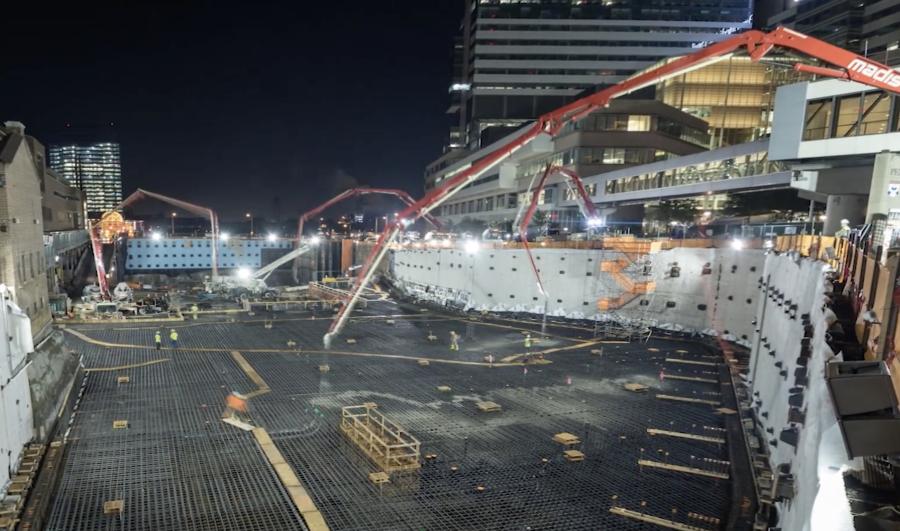 Penn Medicine marked a major construction milestone for its new hospital facility, the Pavilion, on July 8, as crews poured approximately 7,150 cu. yds. of concrete — enough cement to fill a Goodyear Blimp — on the site's foundation in West Philadelphia.

During the 30-hour, nonstop pour, a steady stream of 715 trucks lined up on the South Street Bridge and Convention Avenue to deliver the concrete, which was poured onto 965 tons of reinforcement steel that also is part of the building's foundation. More than 120 construction crew members, site managers and safety support personnel were on hand during the pour and to oversee clean-up.

The Pavilion, expected to be completed in 2021, will house 500 private patient rooms and 47 operating rooms in a 1.5 million sq. ft., 17-story facility on the former site of Penn Tower, across the street from the Hospital of the University of Pennsylvania and adjacent to the medical campus's outpatient hub, the Perelman Center for Advanced Medicine.

The Pavilion will house inpatient care for the Abramson Cancer Center, heart and vascular medicine and surgery, neurology and neurosurgery, as well as a new emergency department. The $1.5 billion facility will be the largest capital project in Penn's history and Philadelphia's most sophisticated and ambitious health care building project.