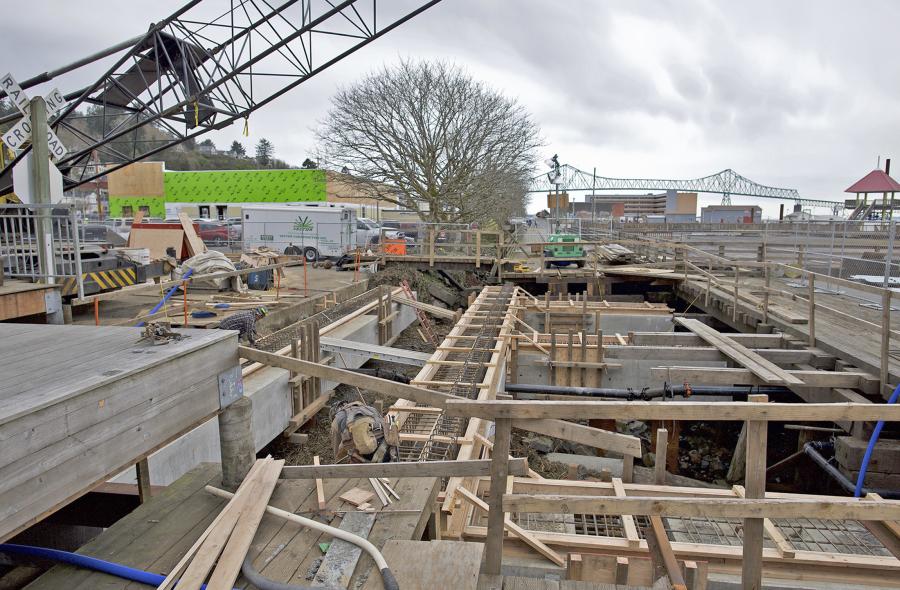 Legacy Contracting Inc. completed the reconstruction of six waterfront bridges in the city of Astoria, Ore.

The project included reconstructing six aging bridges at the Astoria Waterfront, at 6th through 11th Streets, and installed drainage and water quality facilities at the intersection of U.S. 30 and 30th Street in Astoria. 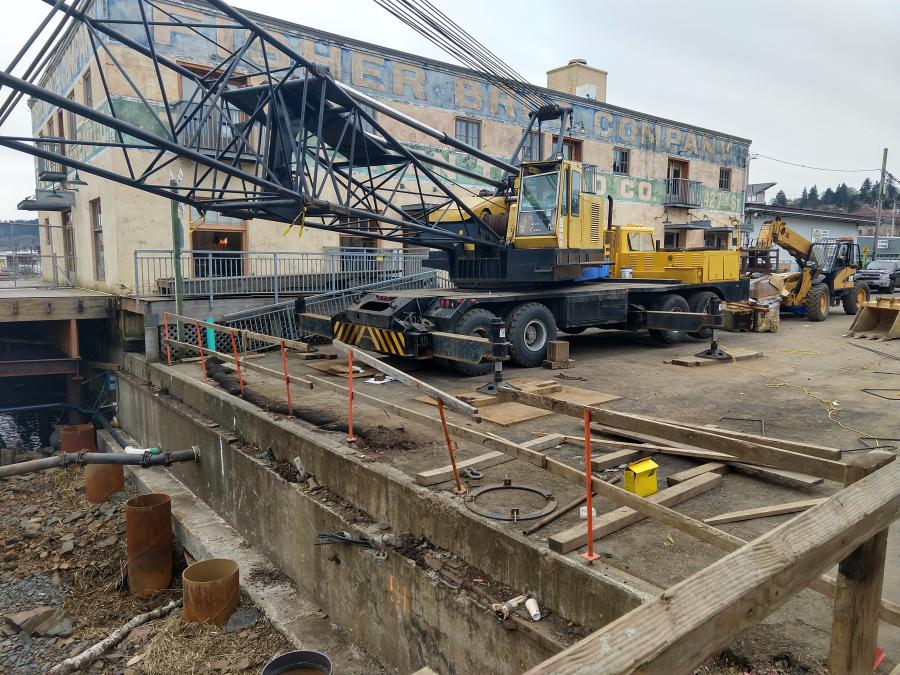 Ninety percent of the project's funding was provided by the Oregon Department of Transportation's (ODOT) through the Local Highway Bridge Program, with the remainder coming from the city.

Construction, based on two winter shut downs, began in September 2018.

"The bridges were beyond their useful lifespan, and had a limited load rating," said Jeff Howell, Legacy Contracting's project manager. "This project is in area of the city where a lot of the businesses depend on tourism to support them. So, it is extremely important to the city and the local business that the project keep the historical charm of the old downtown waterfront."

The project was designed by OBEC Engineering, with ODOT providing on-site management.

Careful planning went into the selection of the building materials to maximize the lifespan of the new bridges.

"The 10,150 linear feet of steel piling are connected to a zinc anode system to protect them from corrosion," said Howell. "Each piece of the steel rebar in the concrete is electrically connected to allow for cathodic protection of the rebar. This required over 7,521 connections."

The traffic management plan was based on the closure of street ends during construction and various lane restrictions.

"We finished the paving for the approaches to each bridge, some of the railing and punch-list items," said Howell. 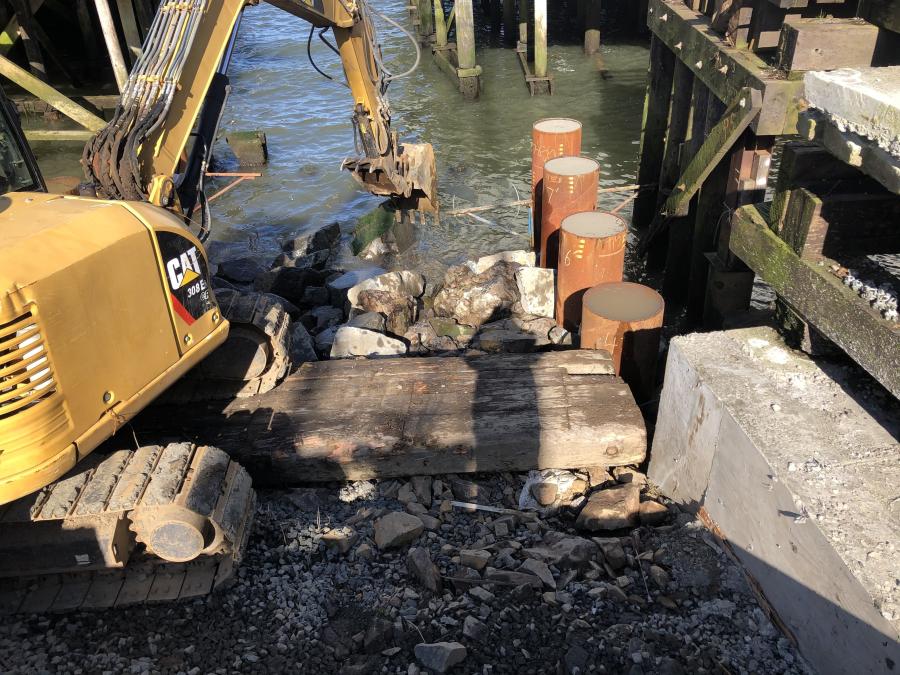 The bridge replacement was complicated because each bridge tied into the trolley line for a track that runs along the river.

"So, in addition to replacing the vehicular bridge, we also replaced a portion of the trolley trestle system at each bridge location," said Howell. "The trolley system along this portion of the waterfront is all supported on a wood pile supported trestle. So, we had a challenge to match new construction into the old existing structures."

The whole wharf system and part of the old bridges are built on dredge soils.

"You have a bunch of old buildings that are not very stable," said Howell. "We had to do a pre-survey of all the buildings prior to construction, vibration monitoring during the constructions, and then a post-construction survey. We didn't want to create any kind of excess vibrations when you drive a pile right up against some of the buildings. The design had some very large precast sections, but due to their weight and the constraints of access, you could not bring in a big enough crane to lift them. We had to redesign some of the precast cap sections to make them smaller so that we could bring in equipment that fit within the constraints of the roadway and existing buildings.

"Most of your work areas were tight – you were digging right next to buildings and we tried to use the lightest equipment to minimize the impacts," he added. "The existing 11th Street had an old discharge concrete structure running down the middle of it. When we brought the cranes onto the road way, it started sinking and the city had to strengthen the street so we could access the area. They put in micro- helical piers to support the roadway and old concrete walls."

It was a similar situation for the other streets, even when Legacy placed steel plates on top of the existing asphalt prior to the arrival of the cranes.

"We still had some settlement in the roadway, and we had to strengthen and rebuild part of each road in order to get the equipment close enough to the work," said Howell. "We preferred to work 10-hour shifts, but because of the tidal influxes and permit issues, sometimes we had to work in the middle of the night. The tide changed every six hours. All of this caused us to change our work schedule.

"Our working relationship with the city and ODOT is good and we're able to get issues resolved quickly," he added. "There were some design complications because your building new structures tied into existing ones. The trolley system was built in the early 1900s and it's a wood structure – there were a lot of unforeseen conditions with the wood trestle, such as trying to match it, both in grade and material. There had been a lot of different repair to the structures over the years and you couldn't really tell what was done until you started dismantling them."

For each phase, Legacy crews worked on three bridges simultaneously, with various crews moving from bridge to bridge to complete specific tasks. 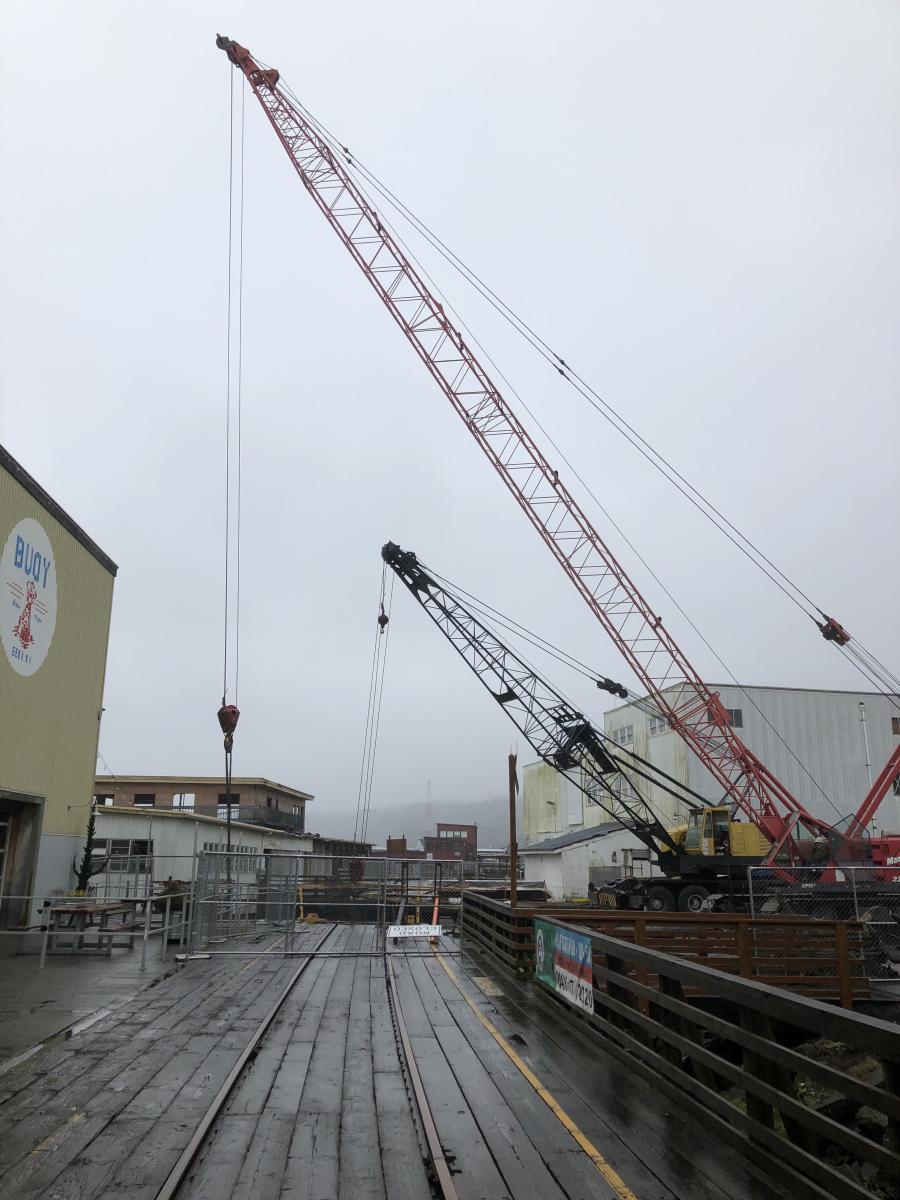 "We rotated our way through the construction," said Howell, who noted that at each bridge site they had a crane setup. "We also had two vibratory and two diesel hammers on-site to keep production going. This allowed us to keep the project moving continuously."

Alternating between even and odd streets allowed local traffic to access business along the water front, which serves cruise ships and brings in a lot of tourism that is important for the local economy. Work was suspended between June and October to accommodate the tourist season, but that meant crews were working in inclement weather conditions that also coincides with the fish windows, which are time frames to limit distress to the wildlife.

"They would have monitors up to a mile away depending on the work activities we had to do," said Howell. "If the seals came into the work area, we would have to stop."

The bridges, which had trolley tracks between 60 to 70 ft. in length, were all demolished and reconstructed in a similar manner. After removing the deck, beams and caps, the wood piles were removed with vibratory hammers without affecting adjacent buildings.

"Then we were able to drive the steel pile for the new structures and complete them," said Howell. "Environmentally this is a sensitive work area, You had to be cognizant of the soil conditions to not create any erosion problems, and any time we did any impact pile driving, we had to use a bubble curtain to lessen the impact to the fish. A lot of the bridges had been remodeled and added onto over the years, they were wood piled supported structures, with some having concrete approach spans. We could take out a bridge in two, sometimes three weeks, depending on the amount of concrete involved."

Tides were a factor in the demolition and reconstruction process. Each day Legacy typically had two four-hour, low-tide work periods. There was no access to the bridge sites from the water as there was a wharf between the bridges and the water with various buildings, restaurants and breweries.

"Barges could not be used," said Howell. "Shutting down the trolley aided the construction."

Demolition easily flowed into construction because as soon as the pilings were removed, sometimes up to 40, the new ones could be installed using the same equipment. The new steel piles, pre-bored for the first 10 ft., ranged between 80 to 90 ft. depending on the bearing capacity and the tip of elevation of the individual bridge.

The new bridges averaged around 21 piles.

"In some places we could place four piles a day and in others just one," said Howell. "A lot of it depended on the existing soil conditions. In certain places we had hard pan materials, that required harder driving and more pre-bore work." 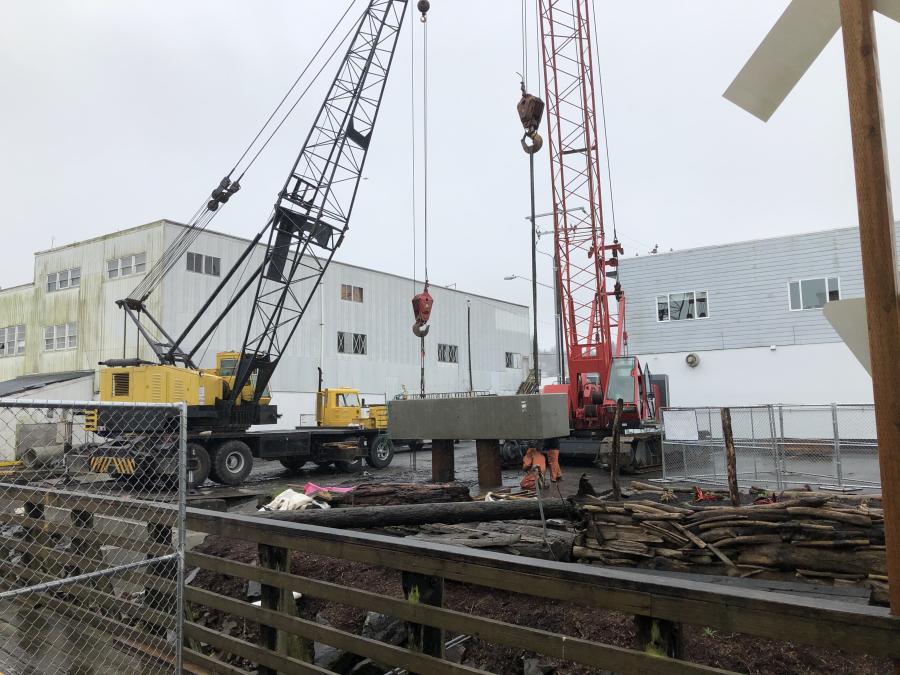 Piles were brought in full length "as needed."

"We set up a template so we could install a truck load of pile at a time," said Howell. "On top of the piles we placed a precast cap with closure pours connecting them. We then did the connections between the precast sections and did the pours for the plinths for the trolley tracks to set on. This was followed by the precast slab decks and the beams and different bents."

The lines for the tracks were laid out in advance. H&H Engineering, the subcontractor who installed the tracks, also removed the old ones. Once the new tracks were set to grade, the concrete pours commenced.

"Since the bridges were similar in design, once you got over the learning curve on the first one, you increased your production on the others," said Howell.

The use of cranes was of utmost importance in performance of the work.

"We had a crane at each bridge location and for some bridges, where additional support was necessary, we could move one in," said Howell.

"We moved them around as needed," he said.

In addition to the drainage and water quality facilities constructed at the intersection of OR 30 and 30th Street, similar infrastructure was installed on the each of the streets that led to the waterfront.

"Every street had drainage going down the middle and varied in depth between two and 20 feet deep," said Howell. "We ran into issues because as you dig down, there were a bunch of tie rods going back into the existing buildings holding up the basements that went down into the street. We carefully worked around them, but it wasn't straightforward. You had to be flexible in the placement of the new pipes." 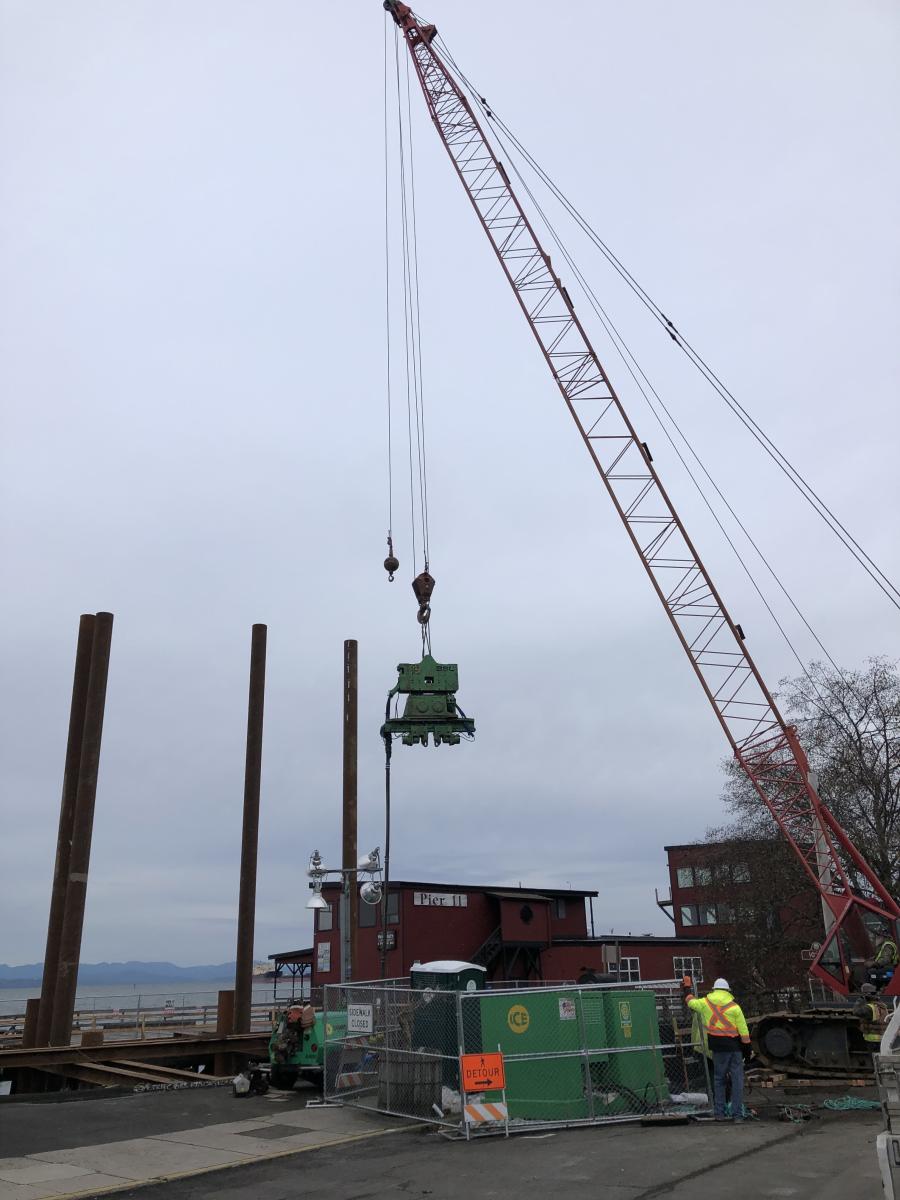 Peak days had 15 to 20 Legacy and subcontractor personnel on-site, with Prairie Electrical for electrical, Bayview Transit for paving, H&H Engineering for rail track installation and LaDuke Construction for pipe work.

The amount of materials from demolition of the bridges and excavation of nearby roads is still being tallied.

"Since this was part of an old wharf system dating back a 100 years, the soils had contamination in them," said Howell. "All the dirt was considered contaminated and had to be hauled off."

"We had to really watch our maintenance, especially on the crane lines to make sure that they were greased and serviced due to the salt air," said Howell. "General maintenance had to be kept up because of the rain and fog conditions – we experienced a lot of that. There was a Cat dealership 40 miles away in Longview, Washington, that could supply us with service and our mechanic lived an hour away and he would visit the site as needed. It wasn't a continuous project, so you had off-site time to make sure the equipment was ready to go for the next season."

Legacy purchases and rents equipment from dealerships such as Peterson CAT. International Construction Equipment (ICE) is purchased from ICE directly, and cranes are purchased at auctions. ICE provided the vibratory hammers and parts and servicing for the diesel hammers.

"You develop a good relationship by getting to know the people," said Howell. "When dealership reps come out to visit you, we spend time to get to know them so they get to know our business and understand what we are trying to accomplish so they can better service our needs."