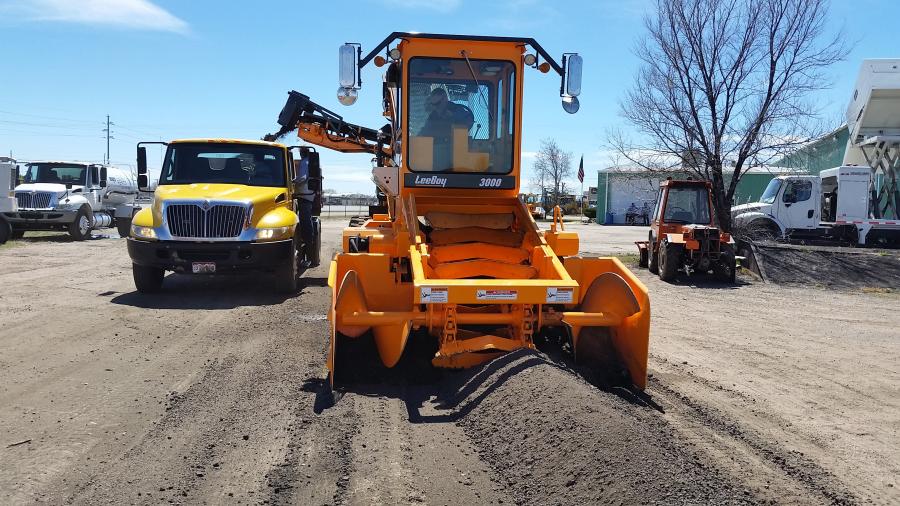 The key advantage of the force-feed loader is its ability to pick up material and load it into a dump truck without stopping.

The first time Steve Roose laid eyes on a force-feed loader was in the mid-1990s. He was turning wrenches as a me­chanic with the Kent County Road Commission (KCRC) in western Michigan. During that period, KCRC would borrow the loader from Muskegon County next door and use it to remove accumulated snow from barrier walls along the highway near downtown Grand Rapids. At the time, it was one of the only force-feed loader in the state. "It was a unique machine; spe­cialized but really good," Roose said.

In 2012, Roose was named KCRC Director of Buildings and Equipment. The department's workload had grown to include over 2,400 mi. of county and state roads, but many of the issues remained the same. Keep the roads and Jersey barriers clear in the winter, and the ditches at the shoulder free of dirt and debris.

For most municipalities and counties, shoulder work remains a constant challenge. The dirt and debris can quickly pile up, preventing the water from draining. The spider cracks that form can quickly spread to the road, creating a patching nightmare. In areas buffeted by high winds, keeping the ditches clean with a wheel loader is like trying to paint the Golden Gate Bridge. Just when you finish the last mile, it's time to start over.

Roose knew from experience that the force-feed loader would enable crews to keep ahead of the work. KCRC Operations department had continued to rent the same machine from Muskegon as needed, but the number of counties wanting ac­cess to it had grown. So when KCRC management developed their 2018 budget, Roose made sure a force-feed loader was included. A few months after the Michigan state government passed the proposed budget, KCRC took delivery on a brand new LeeBoy 3000 Force-Feed Loader.

In the equipment world, the force-load loader (aka belt loader, conveyor loader or pick-up loader) is something of an oddity. Picture a wheeled vehicle, 34 ft. long nose to tail, most of which is the tail. As it drives along, angled gates feed material toward its steamship-like paddles that gobble up anything in front of the machine. The paddles deposit the material onto a long conveyor that carries up and into the waiting dump truck. An optional swivel conveyor enables the truck to ride alongside the loader.

The machine was originally developed by Athey in the 1920s to remove the huge piles of plowed snow (snow berms) from the sides of roads and bridges. For a brief period in the 1980s, LeeBoy produced a competitive machine and then in 2001, the company decided to purchase the Athey line of force-feed loaders.

Since purchasing the line from Athey, LeeBoy has implemented a variety of improvements, including a beefier engine, tempera­ture-controlled cabs and a high-torque auger option for heavy snow removal.

The key advantage of the force-feed loader is its ability to pick up material and load it into a dump truck without stopping. This makes it perfectly suited for removing windrowed dirt from road shoulders as well as snow berms. Because the loader is constantly moving forward, it enables the road crew to create a highly efficient train.

For shoulder work, the train typically consists of a grader in front, followed by the force-feed loader, then the dump truck and a broom. A small skid steer is often used in the rear to collect debris such as large rocks or small tree stumps that the loader can't pick up. Depending on the size of the pile, the train's perpetual motion keeps it advancing at a constant speed of about 150-250 ft. per minute (about two mph). Crews will often use three dump trucks to ensure the loader doesn't outrun the train.

The traditional alternative -- a wheel loader, truck and broom -- requires less manpower, but is much slower. The cycle time to for the loader to scoop, back up to the truck, dump the load, turn around and drive back to the pile can be a couple of minutes or more. This can slow the crew down to about 25 to 50 ft. per minute (about a half mile a day). In that same eight hours, a crew with a force-feed loader can complete three to four miles of shoulder work.

The second major application is snow removal. In areas like Buffalo, Cleveland and Michigan winter typically brings 70 to 95 in. of snow each year. In urban areas, snow plowed from the street can pile up six or seven ft., creating a barrier between the street and sidewalks that can cost merchants and other businesses. On the highways and bridges, the snow berms are a serious safety issue, especially where Jersey barriers are used.

For the removal of heavy snows, the 3000-FFL offers an optional high-torque auger system in place of the tapered moldboards. A few years ago when the machine made an appearance in downtown Spokane, Wash., it prompted several motorists to stop their vehicles and applaud as the loader went past.

The applications for the 3000-FFL are not limited to snow and dirt. "We've got customers in upstate New York using it in the fall to pick up leaves that have been raked to the street. Pretty much anything you can put in front of this thing-sand, salt, gravel, rail car spills-you can pick up and load," Wight said.

While those who work in municipal or state road management may be familiar with the force-feed loader, knowing when to use it versus a wheel loader isn't always obvious. Steve Gola, salesmen at Stephenson's Wilkes-Barre, Pa., facility suggests starting with the basic job requirements: how much do you have to get done and how long do you have to complete it?

"If you've got a week to clean a couple miles of shoulder, you can rent a compact wheel loader for a week at about $1,000 and get it done," Gola said. Anything more and the decision begins to swing in favor of the force-feed loader.

"One of the things all municipalities struggle with is manpower. They don't have the money to hire the manpower they need, so they're looking to make jobs as efficient as possible to optimize their crews," Wight said. Lack of manpower, however, is also one of the primary obstacles keeping small municipalities from being able to utilize the speed and productivity of the force-feed loader. Running an efficient equipment train requires a six-person crew or more. Many rural counties may only staff four or five employees, total.

Obviously, geography and climate play a big role, as well. In the Midwest, where hot, dry summers are often accompanied by high winds, crews may have to clear their road ditches several times a year -- good argument for investing in a force-feed loader. In sheltered valleys along the Blue Ridge Mountains, however, windrowed dirt isn't as much of an issue and the occasional snow melts quickly. In those areas, the advantage would go to the wheel loader.

Rental vs. Purchase (Chicken vs. the Egg)

As with any capital purchase, the 3000 FFL is an investment for any municipality or department. Most customers begin by renting the machine from their local LeeBoy Dealer on a monthly or weekly timeframe. With the increased productivity, the municipality can get a lot of work done within a short timeframe, without absorbing the long-term financial obligation.

In most cases, it takes a while for most departments to realize the full potential of the machine. The smaller the department, the longer that process typically takes. With the larger county and state departments, the value curve can increase rapidly. "Once utilization reaches 200 hours a year, we see a lot of the rental customers start to take a hard look at purchasing a machine," said Wight.

Once purchased, customers tend to keep the machine for decades. The machine itself is a workhorse, able to rack up tens of thousands of hours before being retired. Last year, a 1978 Athey 7-11 FFL sold on Municibid for $2,200. The description on the auction listing simply read: "In very good shape, fires right up and totally operational."

Another opportunity exists through the various collaborative partnerships that support thousands of county and municipal road departments across the country. That brings us back to Steve Roose and the Kent County Road Commission. The KCRC and Muskegon County Road Commission are both part of the County Road Association of Michigan, which represents the state's 83 county road agencies.

The number of such state and regional associations are exponentially increasing. Among other things, they provide a forum where members can swap information, contacts and even equipment. It was at a regional meeting back in the 1990s where KCRC managers first got wind of Muskegon County's force-feed loader.

"There's a lot of horse trading that goes on when we get together. It allows smaller counties to try out equipment they can't afford to purchase, at least not at the time," Roose said.

But, like KCRC, when funds do come available and a county is in a position to purchase a force-feed loader, the dealer still gets the business. That's precisely how it happened for Gambee and Michigan CAT.

As for Roose, KCRC is now the county road commission with the brand new toy, in a state that could certainly use more of them. They've only had their LeeBoy 3000 for a few months, but "we've already had some interest from other counties," he said.

Odds are, he won't be lending it out anytime soon. The department took delivery of their 3000-FFL in March and after a one-day start-up and training, led by Tony Wight of LeeBoy, KCRC began putting the machine to work. "Their biggest issue now is what to do with all the soil they're picking up. So they are talking about getting a soil screen and making topsoil for their own use,” Wright said.