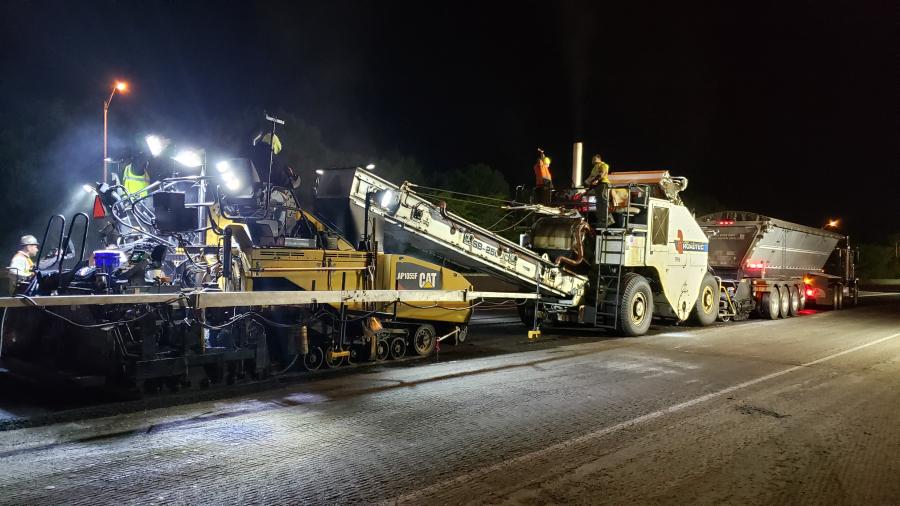 This initiative will restore 480 lane mi. of pavement in Nassau and Suffolk counties.

"The LIE provides connections to nearly every major highway in the region and is vital to Long Island's economy for commuters, tourists and the flow of goods," said Stephen Canzoneri. NYSDOT's public information officer, Region 10 (Long Island).

"Crews anticipate using approximately 273,000 tons of asphalt in renewing the 287 lane miles as part of this $80.1 million project that includes the three main travel lanes, the High-Occupancy Vehicle [HOV] lane, shoulders and 62 on/off ramps. An average of 152,000 vehicles travel in this section daily."

Major work began this spring and is scheduled to be completed by the end of this year. This was announced as part of a $157 million resurfacing investment across Long Island. The work zone covers the LIE in western and central Suffolk County between the Nassau/Suffolk border and State Route 112 (Exit 64).

A second contract, $23.9 million, is renewing pavement on a 63-lane-mi. stretch of the Southern State Parkway between Exit 20 (Grand Avenue/Baldwin Road) and State Route 110 at the Nassau/Suffolk border.

"This project, which is scheduled for substantial completion by the end of 2022, builds on last year's resurfacing project that stretched between the Cross Island Parkway at the Queens/Nassau County border and Exit 20," according to NYSDOT. "The Southern State Parkway is among the most heavily traveled roads on Long Island with an average of approximately 200,000 vehicles daily."

The work also includes the scenic Meadowbrook State Parkway, a gateway to Jones Beach and it is being restored from Merrick Road southward to Ocean Parkway in the town of Hempstead.

"Overnight resurfacing of the 23 lane miles wrapped up by Memorial Day. The remainder of the $5.6 million project, including the restoration of the turf shoulders, is expected to be finished by the end of the year," said NYSDOT.

"These are some of the busiest roads on Long Island. The projects will ease travel and improve mobility for motorists in Nassau and Suffolk counties by resurfacing approximately 480 lane miles of state highways, including key sections of the Long Island Expressway, the Southern State Parkway and the Meadowbrook State Parkway."

The project was an in-house design by NYSDOT's Region 10. According to NYSDOT, the wearing course of asphalt lasts plus or minus 10 years, depending on volume of regular traffic and truck traffic.

"One of the biggest challenges was to progress this project while minimizing traffic disruptions on a vital, heavily traveled corridor that handles, on average, a volume of approximately 175,000 vehicles per-day," said NYSDOT.

"Some of the new or unique materials or equipment being used include warm mix asphalt, a mixing machine to redistribute material so that asphalt is not being directly dumped into the paver [avoids clumping] and joint adhesive that was added to longitudinal joints between adjacent asphalt mats."

"Our major concerns on this job are safety and production," said Tully Construction. "To reduce inconvenience to the public, this job is 100 percent night work. Night work is always a safety concern. During our specific work window motorists are not at their best. A work zone intrusion is something we train on. In this limited work window, we have to get as much work done as possible each night. The current production of the project places us far ahead of schedule. We are working as productively as possible to completely finish in record time.

"We make extreme efforts to keep our idle equipment far off the roadway," Tully added. "In some areas grassy shoulders are not very wide. We take extra safety measures in these areas. Our office for this project is a trailer. This trailer is moved when necessary. Tully Construction has seven full-time managers to monitor our nightly efforts. This project is so important to us that the Tully brothers are present regularly as our owners. NYSDOT managers have been supportive and proactive in this project."

The electrical work in this project to improve the traffic communication systems is being handled by NYSDOT's Inform system.

Resurfacing operations are ahead of schedule.

"A major concern in resurfacing projects is trucking coordination," according to Tully Construction. "Milling by-products are transported off the job and new asphalt must come in logistically efficiently. We are doing three regular lanes, the shoulder and the HOV lanes simultaneously. In all, resurfacing projects Tully Construction is prepared to do base repairs immediately so the lanes can be opened up in time at the end of the work window."

The high traffic roads have a concrete base and an asphalt wearing course on the surface.

"We are repairing the road base as needed, not replacing it," according to Tully Construction. "The asphalt wearing course is two inches in depth. The existing asphalt is being removed and then reinstalled with new pavement.

"We can put traffic on the new roadway one hour after rolling is completed," Tully added. "We are producing the asphalt for this project at our plants. It is then delivered to the sites by trucking subcontractors."

The Tully construction team greatly appreciates the tireless efforts of its teammates and onsite management crews.

"This is an all-star crew that has done many resurfacing projects in record time and on budget without incidents," the company said, pointing out that "we are using the local talents of 1298 Laborers Local and 138 Equipment Operators Local."

When the job is completed, crews will have removed 280,000 tons of worn asphalt, which cannot be recycled on site.

"Tully Construction owns and operates its own bluestone mine," said Tully. "However, recycling is important. Milling is a resource for future use on projects in varying percentages as required by some clients. Higher percentages of recycled asphalt mix are used in green projects."

New materials should include 280,000 tons of asphalt.

Peak days have 100 Tully Construction and 35 subcontractor employees on site. The major subcontractors are Island Pavement for crack and joint sealing; Liberty Sweeping and Trucking; J. Martinez, Dana and South Bay for Trucking; Hinck Electric for electrical; and Safety Marking for striping.

"We are using all company owned equipment in this endeavor," said the Tully team. "All the equipment of this project must be in good order during our nightly work window. Equipment inspection by the operators is key to this. Additional mechanics can be dispatched as needed from our facility in Flushing. Tully Construction has five mobile mechanics, assigned to our Queens facility. One of these mobile units has the primary responsibility of this project. The key to maintenance on this project is schedule. Maintenance must be done periodically as required before maintenance becomes a repair item." CEG