More than 40,000 vehicles a day pass over the Lesner Bridge in Virginia Beach, many of them carrying people to and from the popular oceanfront. 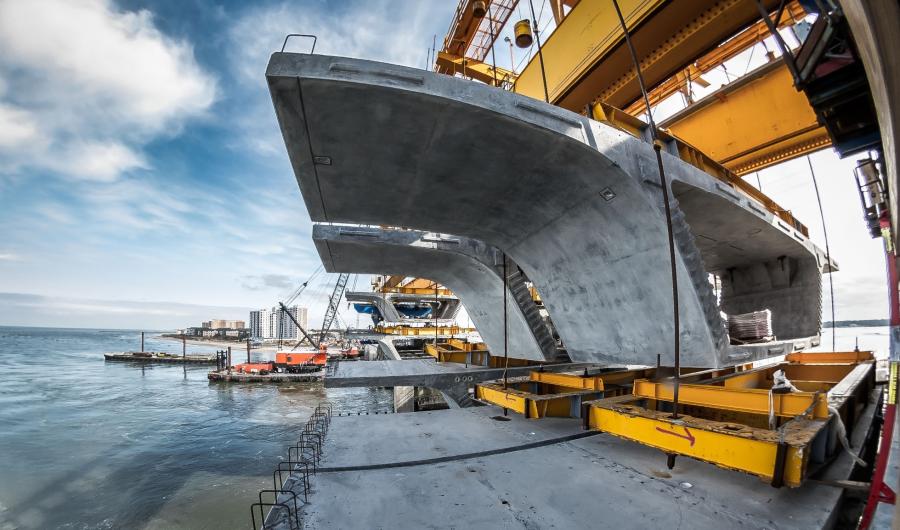 The Lesner Bridge is in the midst of a much-needed $119 million replacement.

More than 40,000 vehicles a day pass over the Lesner Bridge in Virginia Beach, many of them carrying people to and from the popular oceanfront.

A large number of people from all over the state, including nearby Norfolk and Richmond, as well as the Washington, D.C., area, drive over the two parallel spans in order to reach the sun and surf on the Atlantic Ocean.

At this time of year, traffic can be quite heavy for the four-lane Shore Drive that runs across the bridges. Another factor is that the Chesapeake Bay Bridge-Tunnel, just a short distance to the west of the Lesner Bridge, funnels a large volume of vehicles into the area from the Eastern Shores of Virginia and Maryland to the north.

Then there is the ancient age of the Lesner Bridge spans, ravaged for decades by saltwater and coastal storms.

After all of that is considered, the need to update the overpasses is undeniable.

So, 68 years after the current eastbound span and 49 years after the westbound bridge were built, the Lesner Bridge is in the midst of a much-needed $119 million replacement.

The new Lesner Bridge will eventually comprise twin, 1,575-ft. (480 m) precast concrete segmental spans across the narrow Lynnhaven Inlet that separates the Chesapeake Bay from the much smaller Lynnhaven Bay to the south.

The design again calls for two lanes in each direction, but those lanes will afford drivers a more roomy width of 12 ft. (3.6 m) each.

Planning for the replacement spans began in 2006, with the first construction beginning June 2, 2014.

Christopher Wojtowicz, project engineer of the city's Public Works Department, estimates that the bridge will be completed in February 2018.

The city is working with the Virginia Department of Transportation (VDOT) and McLean Contracting in Baltimore to build the Lesner Bridge replacement. The construction cost itself is $78 million, with the rest being spent on design, utility relocation and property acquisition.

VDOT and the Federal Highway Administration is paying the lion's share of the project cost, with the city of Virginia Beach contributing about $16 million, Wojtowicz said.

Wojtowicz characterized the new construction as absolutely essential in keeping this major transportation artery to the beach open and safe.

“We are really just maintaining this old bridge, but it is now to the point where you would have to start replacing girders and road deck in order to extend its life and if you are replacing superstructure, you might as well replace it with a new bridge,” Wojtowicz said. “The substructure, which is the pier columns and footings, is not the best either. “

“I know for a fact that it will be safer and easier to maintain,” Wojtowicz said. “With fewer pier columns, there will be fewer things we have to inspect.”

and Technology in Use

Pleasure craft, pilot boats and commercial fishing vessels will all be able to enter Lynnhaven Bay with more headroom as the new Lesner Bridge will be 45 ft. (13.7 m) above the water, about 10 ft. (3 m) higher than the current spans.

The new bridge, designed by the Tallahassee, Fla., based engineering firm FIGG Bridge, will have a 100-year design life, due in part to technological advances in concrete and steel not available in the 1950s and '60s.

“We are using a low-permeable concrete on the superstructure of this bridge and that's 10,000-pound concrete,” he continued. “All of the steel on this bridge is Class-1 corrosion resistant rebar and, actually, in some of the pier columns where LED lighting is being installed and there is reduced concrete cover, we are using stainless steel rebar. So just in the kind of construction materials we are using, we will be able to reduce the maintenance of this bridge.”

All the substructure and superstructure of the spans will be protected by a coating called Bridge Cote, manufactured by Textured Coatings of America, headquartered in Panama City, Fla. The Palamino Beige coating being applied should put up a much better defense against salt air eating into the new Lesner Bridge, Wojtowicz said.

“Any kind of chloride that does get to the reinforcing steel will be faced with corrosion-resistant rebar, so hopefully we won't have the spalling [chipping or flaking] we have on the existing bridge,” he said.

The weather in this part of the Chesapeake Bay, where it opens to the Atlantic Ocean, also can be unpredictable with rain squalls and high winds, as well as notorious hurricanes and nor'easters. The Lesner Bridge actually borders the Bay to the north, but according to Wojtowicz, most weather issues were anticipated before work began.

“We have had weather and equipment problems that have caused some delays. Some of that, though not all, were figured into the schedule,” he said, “so we have asked McLean for a schedule recovery plan.”

He said that on the bridge segments crews have been applying an apoxy to the concrete, a practice that can only be done if the surface temperature is above 40 degrees Fahrenheit and the weather is dry. In addition, they cannot operate the gantry cranes in winds greater than 30 miles an hour.

New Westbound to Open in Fall

There has been some earthmoving on the project, including the construction of a 350-ft. (106.6 m) long wharf on which to anchor the crane barges. Most of the work on the Lesner Bridge, though, is done by the cranes that put in both the substructures and lift and place the bridge segments.

Work is progressing very well right now and should continue through the summer, Wojtowicz said.

With that done, crews will demolish the two old bridges and start constructing the new eastbound Lesner bridge. When that is complete, eastbound traffic will be allowed across.

Back on the other bridge, vehicles moving west will be shifted to allow crews to finish building that span's new multi-use paths, designated for cyclists.

If all goes well in the next few months, Wojtowicz foresees traffic moving over the new westbound span this November.