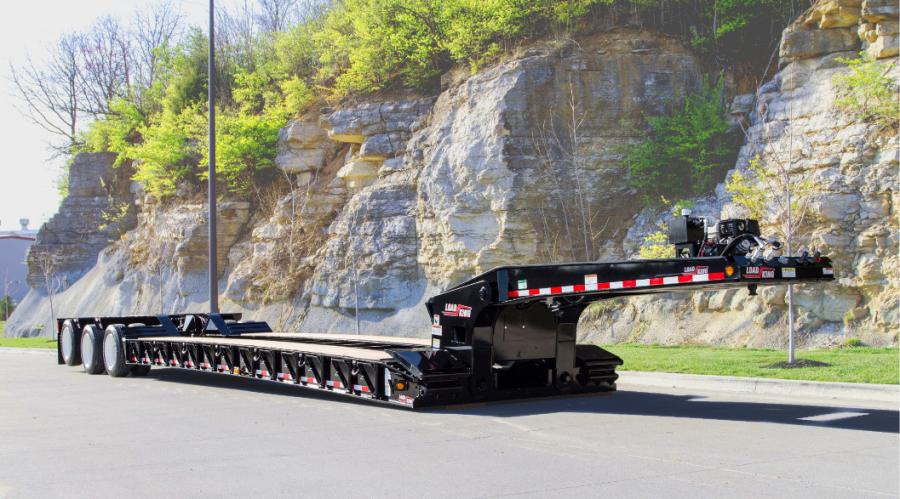 Load King LLC's LK503/605 SS SF 60-ton (54 t) Lowboy is the newest addition to the OEM's trailer and equipment portfolio. The LK503/605 SS SF features a 20 in. (50.8 cm) loaded deck height — the lowest in the industry — and a distinguished range of innovative features and options, according to the manufacturer.

Rated at 60-tons in 12 ft. (3.6 m), the 20 in. loaded deck height is paired with the ability to add both a 24 and 36 in. (61 and 91 cm) flip extension on the gooseneck. Combined with the ability to run two additional axles in either a close coupled-position or as a separate axle group, these features ensure operators have the right combination of axles and spacing to legally haul their load.

The last 8 ft. (2.4 m) of the trailer is recessed with pierced-steel plates, offering the lowest bucket well in the industry, and allowing operators to keep their height down when hauling long reach excavators. A push-pull, manual raise-and-lower valve reduces the likelihood of suspension damage, making it impossible for the bags to continue to overinflate if the valve is left in the regulated position, according to the manufacturer.

The new LK503/605 SS SF is Load King's latest accomplishment on its vow to build inventive solutions designed to improve the lives of equipment and trailer customers. The LK503/605 SS SF comes in a line of several similar Load King productions unveiled in recent years, including the 18 in. (45.7 cm) loaded deck height 55-ton (50 t) Lowboy, and the reintroduction of the rock hauler frameless end dump with added updates such as a two-piece tub, self-shedding top rail, and double-acting air cylinders on the gates locks, which were brought to market in 2016. And, in July of 2018, the 13 in. (33 cm) loaded deck height mechanical detach double drop was introduced, which most notably also features 34 ft.-6 in. (10.5 m) deck length.

These trailers have been chapters in a resurgence at Load King, which became a wholly-owned subsidiary of Custom Truck One Source in December 2015. Tom Norcross, the president of Load King, has more than 30 years of experience in the industry. Since joining forces with Custom Truck, Norcross has quickly implemented specific customer-focused design changes to several of the company's trailer lines.

“The LK503/605 SS SF is a manifestation of one key objective I indoctrinated at Load King my first day, which was to build the lowest deck heights and highest payload trailers in the industry. I knew this would empower customers to transport loads they never could before, and reduce the downtime and costs of additional permits, and pilot cars they required in the past,” said Norcross.